Eagle Marks Fourth Of July In Boston
By Jennifer McDermott
The Day
July 4, 2012 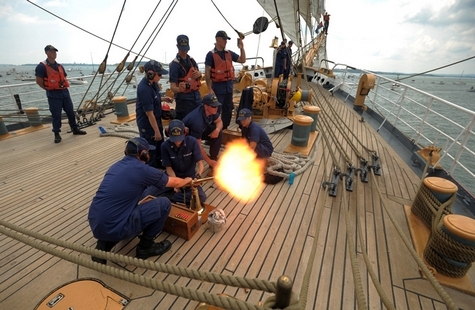 Tim Cook/The Day
The crew of the United States Coast Guard Barque Eagle fires a 21-gun salute as the Eagle
joins the U.S.S. Constitution on the Constitution's annual 4th of July turn around cruise in
Boston Harbor Wednesday, July 4, 2012.
Boston — Side by side in the mouth of Boston Harbor, "America's Tall Ship" and the world's oldest commissioned warship afloat each fired 21 ceremonial shots in honor of the nation's birthday Wednesday.

After every loud boom, a cloud of smoke rose from the side of each ship and black powder residue blew across the decks.

It was truly a unique sight for the spectators who filled the lawn in front of the historic Fort Independence. Even though the Coast Guard barque Eagle and the USS Constitution have enjoyed a close partnership for years, Capt. Eric C. Jones could not recall a time when the two ever sailed together.
Jones, commanding officer of the Eagle, said it's "tough to get more poignant" than having the two ships in Boston Harbor on July 4th, celebrating the signing of the Declaration of Independence and commemorating the bicentennial of the War of 1812 for Boston's Operation Sail.

With Constitution leading the way, the ships turned and headed back toward the shore, stopping to fire a 19-gun salute in front of the USS Wasp. The secretary of the Navy was aboard the amphibious assault ship.

Suddenly there was a roar in the distance. The Navy's Blue Angels raced overhead in formation. The distinctive blue fighter jets made several passes over the ships. Mathew Lara, a cadet training on board Eagle, leaned over the side to take pictures.

"I feel very honored, personally, to be standing here on the decks of this ship in Boston Harbor on the fourth," the 20-year-old cadet from Boulder City, Nev., said.

"You come to appreciate what America is on the Fourth of July," the 19-year-old from New Hampshire said.

Martha LaGuardia-Kotite, a captain in the Coast Guard Reserve who was in Boston to go on the Wasp, said the flag "reflects our history and unifies us all as Americans."

She is the author of two recently published books — one that celebrates the flag with iconic photos and another that celebrates the accomplishments of female trailblazers in the military — and will sign copies as part of New London's OpSail event on Saturday at Fort Trumbull.

Eagle hosted several flag officers from foreign nations on board since they were in the city with their ships.

"It's an incredible opportunity," said Gardam, who commands the Maritime Forces Atlantic and Joint Task Force Atlantic. He said the visit strengthened the already close working relationship between the services.

People lined the shores of the harbor to see the ships, and boaters crept as close as the Coast Guard and Boston police patrol boats would allow. At each of Eagle's port visits recently, people have been eager to see the tall ship and meet the crew, said Greg King, a damage controlman on board.

"It's like we have rock star status," he said.

"It makes me feel pretty proud to be attached to this unit," added Crystal Lynskey, a boatswain's mate on Eagle. "You do kind of feel famous."

The two ships fired a salute in front of the Coast Guard base in the North End in honor of the state of Massachusetts before returning to the Charlestown Navy Yard.

Next the Eagle sails to New London to lead a parade of 24 military and tall ships Saturday. King said he couldn't wait to get there, to bring Eagle into port in all its glory.

"It's going to be pretty amazing," he said.