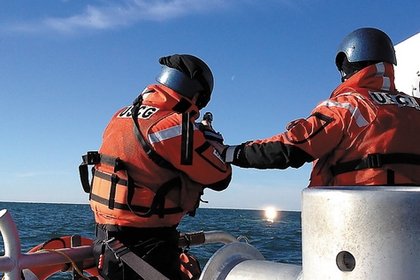 U.S. Coast Guard
Members of Coast Guard Station New London practice using the LA51 warning device in December.
Wayward boaters to be greeted by flash, loud bang
New London - The Coast Guard now has a loud and flashy way to warn boaters who are near an area or vessel they shouldn't be.
The LA51 signal and warning device is a cartridge that is fired from a shotgun to produce a bright, white flash and loud bang, similar to the noise a firecracker makes.
Throughout Long Island Sound, members of the Coast Guard usually use lights and sirens, portable loudspeakers and calls over the marine radio to get boaters' attention. Sometimes they maneuver their patrol boats alongside.
The LA51 can be used when these methods aren't working, and it's much safer than firing a warning shot, said Capt. Joseph Vojvodich, commander of Coast Guard Sector Long Island Sound.
"We use our flashing lights, call them on the radio. If those kinds of things are not drawing their attention, this would be something the team could reach to," Vojvodich said. "Then it becomes very clear if they don't become compliant. We really do understand their intent."
Three stations in the sector - New London, New Haven and Eatons Neck, N.Y. - are using the LA51.
Coast Guard Station New London finished training with it in December. No one has had to use it in an actual incident, said Lt. Todd Hartfiel, commanding officer of the station.
"Having a safe, effective tool gives peace of mind to the crew. It's stressful enough to do the law enforcement job," Hartfiel said. "Hopefully we'll never have to use it."
While the station escorts submarines entering or leaving the area, other boats must stay 500 yards away, Hartfiel said. If a boater did get too close and was not heeding the Coast Guard's warnings, the LA51 could be fired in front of a boat's bow and would reach up to 100 yards, he added.
"We'll get your attention. It's a loud bang and a bright white light," Hartfiel said.
Vojvodich knew of only one occasion where a crew used the LA51 to warn a boater. The boat, which was near Boston last year, followed the Coast Guard's orders after, he added.
The Coast Guard has been using the LA51 as a warning signal during alien migrant interdiction operations and counter-drug operations.