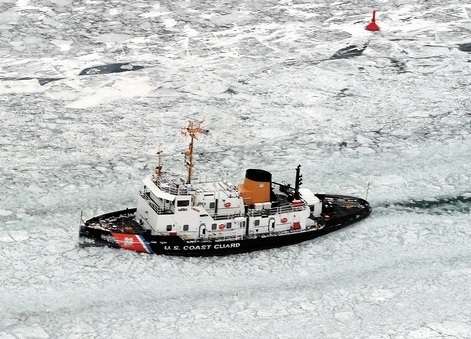 Petty Officer 3rd Class George Degener/U.S. Coast Guard
The New London-based Coast Guard cutter Morro Bay clears
a path through the ice near Neebish Island, Michigan.
Morro Bay joins effort by Coast Guard to break Great Lakes ice
Petty Officer First Class Eugene Wright woke up one morning while the Coast Guard cutter Morro Bay was sitting still in the ice.
"The ice-covered lake was blanketed in three to four inches of snow," the boatswain's mate wrote last week in a journal entry posted on Facebook. "With no land in sight, it appeared as if the cutter had been gently placed in the middle of a snow covered field and if I hadn't known better, may not be in the water at all. It sounds crazy, but with the sunrise it was picturesque. I am sure that in the months to come there will be plenty more experiences and lessons learned."
Each winter, Coast Guard ships convene in the Great Lakes for the country's largest domestic icebreaking operations. The cutter Morro Bay, which is homeported in New London, left Connecticut in late November for Cleveland.
The crew of the 140-foot cutter spent three weeks icebreaking this month, and members described their experiences via journal entries on Facebook.
The cutter got under way on Jan. 3 to start icebreaking in lower Lake Huron, the St. Clair River, Lake St. Clair, Detroit River and Lake Erie as part of "Operation Coal Shovel."
Then the Coast Guard moved the cutter to "Operation Taconite," named after one of the chief commodities in the area, and the crew of 20 headed for the St. Marys River. Toward the end of the three weeks, the Morro Bay returned to the St. Clair River and worked with the Canadian Coast Guard cutter Samuel Risley.
Lt. Cmdr. Douglas Wyatt, commanding officer of the Morro Bay, wrote in a journal entry about how the cutter helped a large cargo ship that couldn't turn in a channel. He compared moving the 1,000-foot vessel to "blowing a single pass through 30 inches of snow down the center of your driveway, then trying to drive out in a full size van."
They used a technique called "grooming a turn."
"We run up the channel well in advance of the following ship and favor one side of the turn, stop, come about, then run back down the channel favoring the other side of the turn. If seen from above, it would look rather like a crescent moon cut into the ice with the ends of each run meeting in the channels leading into and out of the turn," he wrote.
Then, he wrote, "We turn around once again and run right up the center of the crescent, with our wake breaking up any remaining large pieces of ice. The goal is that the following ship puts their bow on the inside track while their stern swings through the ice to the outer edge of the second track. If you do it right, the escorted ship never even stops. … We soon had them back up to speed and headed up river."
In the three weeks, the cutter helped 18 vessels, including a ferry, that were either stuck in the ice or needed an escort to get through the ice, and made paths in the ice that 17 other ships used to get to their destinations. The crew spent more than 350 hours under way in January and traveled close to 2,000 miles.
"This past week we entered Lake Michigan and have now been to all five Great Lakes," Lt. Jonathan Tice, the executive officer, wrote in an entry Jan. 21. "The seemingly endless miles traveled and hours worked were all done to help ships get through the ice and on their way to bring materials and goods to their ports of call."
He continued, "Working in the ice is very demanding with 1,000-foot ships and shoal water, literally feet away, as we maneuver to keep traffic moving. Everyone back home should be very proud of the crew on board Morro Bay as they've braved sub-zero temperatures out on deck, kept our engines running and warm no matter how cold it is, and stood thousands of hours of demanding watches."
The purpose of breaking the ice is to keep the navigable channels open for ships and for the Coast Guard to respond in emergencies, and also to prevent flooding. Ice can plug a waterway, forcing water out onto the shore.
An average of $2 billion worth of cargo, including steel, coal, heating oil and grain, ships throughout the Great Lakes region each year, according to the Coast Guard. The Morro Bay is normally responsible for the waters near Nantucket as well as the Cape Cod Canal and Cape Cod Bay.
Last week, the cutter returned to Cleveland for maintenance. Far fewer ships will be traveling in the region now that the shipping season has closed. The Morro Bay will spend the next two weeks responding to any search and rescue cases, first in Lake Huron and then in Lake Michigan. The calls for help could come from people out snowmobiling or ice fishing, or from a ship that gets trapped in the ice.
The cutter plans to return home in April or early May. To read more of the journal entries, visit the USCGC Morro Bay group page on Facebook. 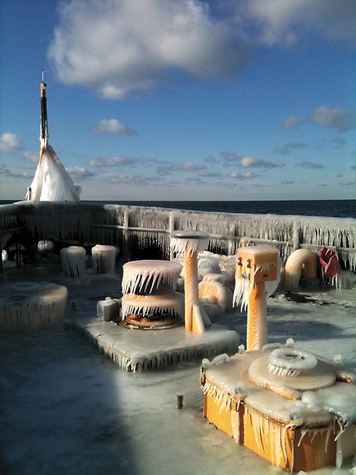