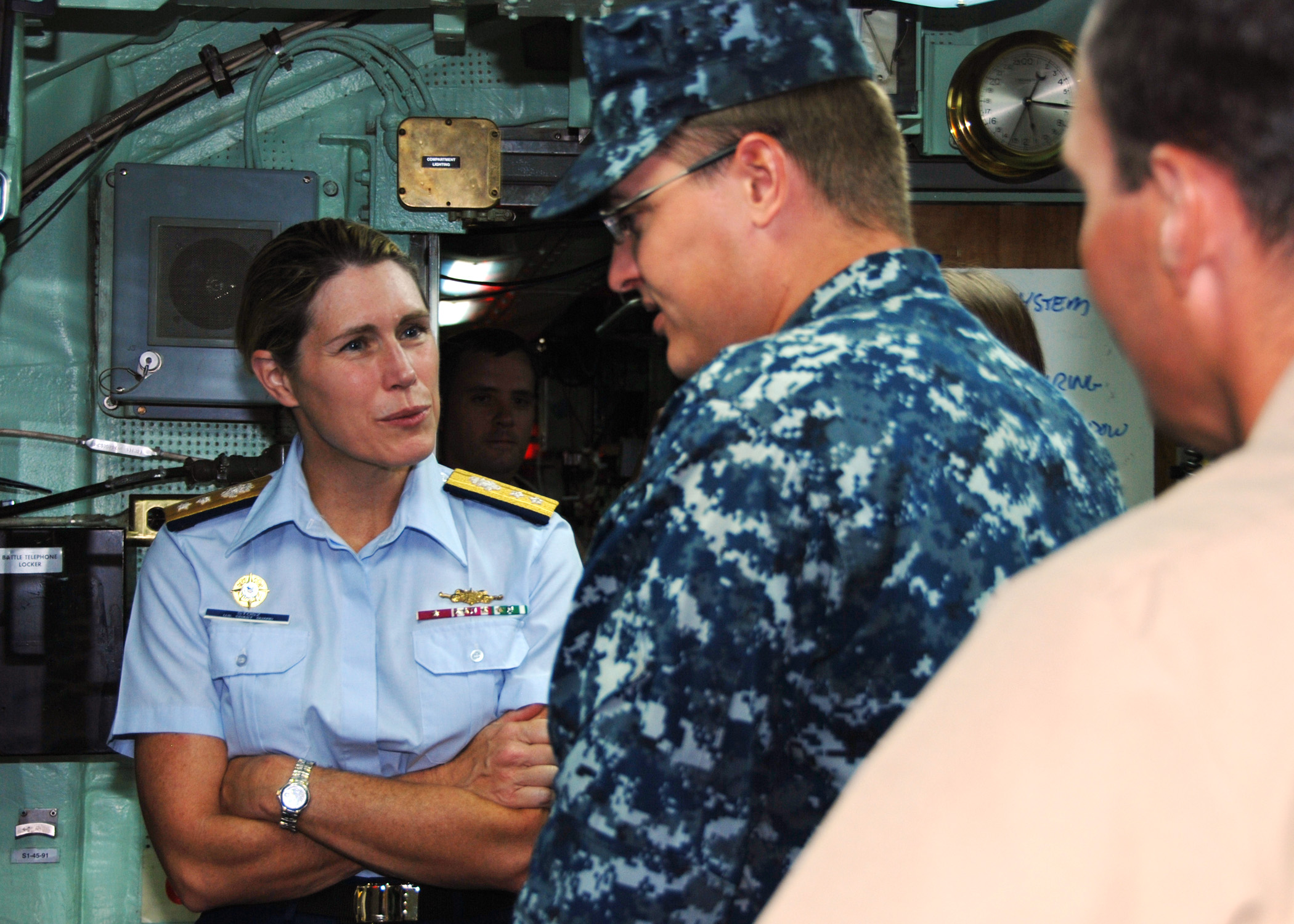 110727-N-AW342-036 GROTON, Conn., (July 27, 2011) – Sonar Technician
Submarine 3rd Class (SS) Kenton Spaulding explains how sonar works on
the submarine to Rear Adm. Sandra Stosz, U.S. Coast Guard Academy
Superintendent during a tour of the Los Angeles-class submarine USS Toledo
(SSN 769). (U.S. Navy photograph by Mass Communication Specialist 1st
Class Virginia K. Schaefer/Released)
GROTON, Conn. – Rear Adm. Michael McLaughlin, Commander, Submarine Group Two hosted Rear Adm. Sandra L. Stosz, Superintendent of the U.S. Coast Guard Academy aboard Los Angeles class attack submarine USS Toledo (SSN 769), July 27.
“It’s an honor to provide an opportunity for the superintendent to visit one of our boats,” said McLaughlin.
During the tour, Stosz also met with Cmdr. Sam Geiger, who recently assumed command of Toledo on July 15. Geiger relieved Cmdr. Douglas Reckamp.
Stosz became the 40th superintendent in June 2011. In her current position, she is responsible for the efficient, safe, and economical accomplishment of the Academy's training mission.
"I was very impressed during my visit onboard the USS Toledo. The pride and professionalism of the crew reflects the Navy's core values of honor, courage and commitment,” said Stosz. “The Coast Guard Academy and the Navy Submarine Base are separated by the Thames River, but we come together on that body of water to serve the United States of America."
During the visit aboard Toledo, Lt. Jon Stockton, the assistant operations officer, provided the tour highlighting the crew and the boat’s capabilities.
“It’s great to have other services, such as the U.S. Coast Guard, visit our boat to see what we are capable of and how we operate,” said Stockton.
Stosz graduated from the Coast Guard Academy in 1982 with a Bachelor of Science degree in Government. She was awarded a Master of Business Administration degree from Northwestern University’s J. L. Kellogg Graduate School of Management in 1994.
The Coast Guard Academy was established in 1876. The oldest service academy is West Point which was established in 1802.
The submarine, commissioned Feb. 24, 1995, is the second U.S. warship named for the people of the northwestern Ohio city. The first was a Baltimore-class heavy cruiser.  Submarine Toledo has a complement of 139 officers and enlisted crew.