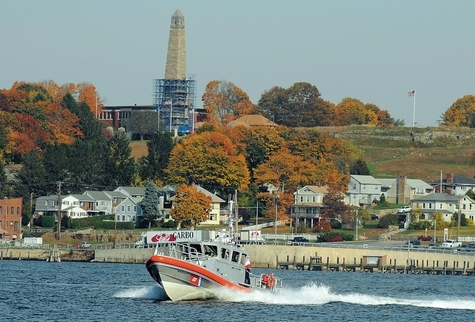 Sean D. Elliot/The Day
Coast Guard Station 's new 45-foot RB-M (Response Boat-Medium) returns from a VIP cruise in harbor on Thursday. The RB-M replaces a 41-foot utility boat that has been in service since the 1970s. Station is scheduled to receive two more of the RB-M boats in February 2011.
Two more to arrive in 2011 to replace older vessels
New London - Coast Guard Station New London has a new response boat, one of the replacements for the aging vessels the service is retiring to handle its increased responsibility for homeland security.
The service's leaders and Congress agree that in the wake of Sept. 11, 2001, new equipment is a must to protect the ports and waterways effectively. The Coast Guard has $27 billion for 20 major acquisition projects, including the response boats.
By 2015, 180 of these boats, known as the Response Boat-Medium, will be at Coast Guard stations nationwide. The project cost will be about $610 million for the boats, training and support services.
The 45-foot boats replace 41-foot utility boats built in the 1970s as well as several other types of Coast Guard small boats.
Reducing the numerous types of boats is also part of the modernization, said Capt. Joel Dolbeck, the RB-M project manager.
Fewer types of boats mean it's possible to buy spare parts in greater bulk to save on maintenance costs, Dolbeck said, and people can transfer between Coast Guard stations without having to train all over again on a different boat.
Coast Guard Station New London received its new boat earlier this month and expects two more in February. A ceremony Thursday at the station marked the official acceptance of the new boat, the 37th one delivered to a station since April 2008.
U.S. Rep. Joe Courtney, D-2nd District, and the keynote speaker, said he was pleased that Congress, and the nation, have given the station better tools to carry out challenging missions. Rear Adm. Daniel Neptun, commander of the First Coast Guard District in Boston, said the boat "brings an amazing capability" that will make the station "a stronger unit."
The response boat can travel 250 nautical miles at 30 knots without having to refuel. And it can withstand 12-foot seas and 50-knot winds, as well as tow vessels of up to 100 tons, Dolbeck said.
State-of-the art technology on board includes wireless headsets, an infrared camera and four shock-mitigating seats.
Coast Guard Station New York used the infrared camera on its new response boat to search through the night in the Hudson River after US Airways Flight 1549 landed in the water last year.
Capt. Joseph Vojvodich, commander of Coast Guard Sector Long Island Sound, said the utility boats were introduced at stations in the 1970s, at a time when the Coast Guard was taking on more law enforcement duties. The "needs of the nation" changed following Sept. 11, 2001, he said.
"As we welcome this new generation of boats in the Coast Guard, I know the men and women of Station New London will be in a better position to answer the call of duty," he said.