"Although mosquito numbers are declining with the onset of cool weather, we continue to detect EEE virus in communities in eastern Connecticut,” said Dr. Philip Armstrong, Medical Entomologist at the Connecticut Agricultural Experiment Station (CAES). “There is continued risk for mosquito-borne diseases until the first hard freeze when mosquito activity ends."

“Mosquitoes are still active and residents should continue to take measures to prevent mosquito bites especially during episodes of unseasonably warm weather as predicted for this weekend,” said Dr. Theodore Andreadis, Director of the Center for Vector Biology & Zoonotic Diseases at the CAES. "This includes applying insect repellent and covering bare skin, especially in wooded areas and during dusk and dawn when biting mosquitoes are most active.” 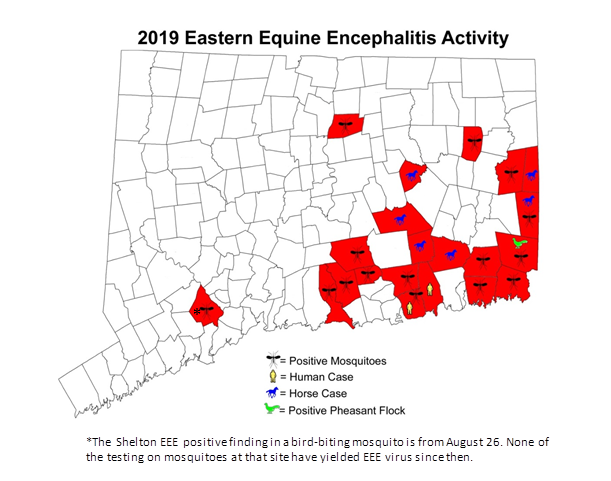 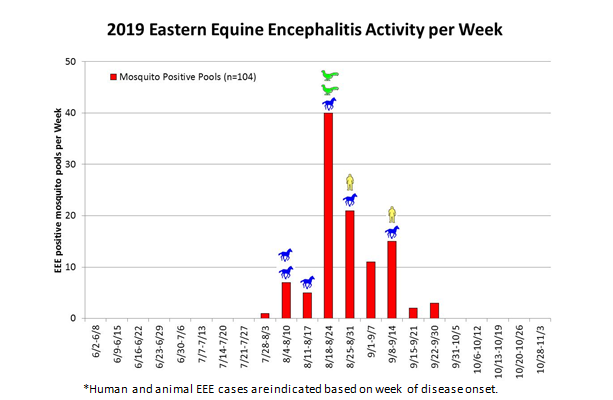 Eastern equine encephalitis is a rare but serious mosquito-borne viral disease in people and horses. On average, there are 6 human cases reported each year in the United States. The mortality rate of hospitalized patients is one-third and approximately one-half of survivors suffer from permanent neurological damage. In Connecticut, outbreaks of EEE have occurred sporadically in horses since 1938 and the first locally-acquired human case and fatality occurred in the fall of 2013.

To reduce the risk of being bitten by mosquitoes residents should:

The CAES maintains a network of 92 mosquito-trapping stations in 72 municipalities throughout the state. Mosquito traps are set Monday – Thursday nights at each site every ten days on a rotating basis. Mosquitoes are grouped (pooled) for testing according to species, collection site, and date.  Positive findings are reported to local health departments and on the CAES website at https://portal.ct.gov/CAES/Mosquito-Testing/Introductory/State-of-Connecticut-Mosquito-Trapping-and-Arbovirus-Testing-Program.

For information on West Nile and eastern equine encephalitis viruses and how to prevent mosquito bites, visit the Connecticut Mosquito Management Program Web site at https://portal.ct.gov/mosquito.