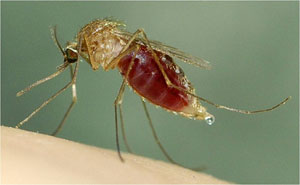 Mosquitoes are a diverse group of insects belonging to the fly order, Diptera. Over 2,500 species can be found on every continent except Antarctica. While North America is home to about 200 species of mosquitoes, currently 54 known species can be found in a variety of habitats in Connecticut. Of this number, approximately one-half are considered pests to humans or livestock and can transmit organisms causing disease.  (Identification Guide to the Mosquitoes of Connecticut)

Life Cycle of the Mosquito

The mosquito's life cycle includes four stages: egg, larva, pupa, and adult. This type of development is referred to as "complete metamorphosis" and is similar to the development of butterflies. Mosquitoes, however, are aquatic, with most of their development occurring in or near water. 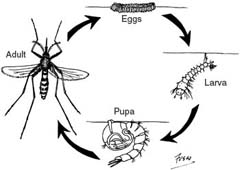 Adult Stage: Only the female mosquito bites because she requires a source of protein to produce eggs. Once a female has digested the blood, she can lay over 250 eggs per brood and, depending on the species, she can seek subsequent blood meals several times per season. Blood is withdrawn using specialized piercing and sucking mouth parts. The female is attracted to hosts by body heat, exhaled carbon dioxide, and other complex physiological processes. Every human has their own unique body chemistry and may be more or less attractive to mosquitoes. Also, not all mosquitoes bite humans and, in fact, some are fairly specific in their feeding preference. For example, some bite only birds or amphibians, such as toads, while others bite mammals, including humans. Males, in addition to females, feed on flower nectar and plant juices for energy.

Egg Stage: Depending on the species, mosquito eggs are deposited either singly or clustered in egg “rafts” on the water surface, or individually on moist soil, the latter hatching when flooded by rainwater or lunar tidal events. Eggs deposited on moist surfaces can withstand drying and can remain viable for several years. Certain species, such as Connecticut's saltmarsh mosquitoes, are very prolific breeders and can lay from 1,000 to 10,000 eggs per square foot on the moist mud found in a saltmarsh habitat. These moist depressions are usually found in the higher elevations of the saltmarsh, which are dominated by salt hay grasses.

Larval and Pupal Stages: Once the eggs hatch, mosquitoes develop through four larval stages (instars) as they feed and grow larger. They then progress to a non-feeding pupal stage and finally emerge as adults. The larvae and pupae breathe oxygen at the water's surface by means of specialized, snorkel-like air tubes. These air tubes are called "siphons" in the larvae and "trumpets" in the pupae. One species of mosquito obtains its oxygen by piercing the fleshy underwater roots and stems of aquatic plants, such as cattails, and actually breathing through the plant. Mosquito larvae actively feed by filtering bacteria and organic matter in the water. The development from egg to adult depends on the water temperature and can take as little as seven to 10 days in warmer weather or up to two months in cool, spring weather.

Many mosquito species (genus Aedes, Ochlerotatus, and Psorophora) in Connecticut deposit eggs in the fall, which will not hatch until the following spring. For these mosquitoes, larval development usually begins in early March and egg deposition can extend into October, with adults most abundant from May through September. A few species (genus Culiseta and Coquillettidia) will overwinter in the larval stage, while adults of other species (genus Culex and Anopheles) will enter into buildings or sheltered areas and remain dormant until warmer weather arrives. (This is why adult mosquitoes are occasionally seen during a midwinter warm spell.) In Connecticut, some species of mosquitoes can produce up to four broods per year. Most have an average adult life span of about two weeks, excluding those which overwinter as adults.

Mosquitoes can develop in a wide variety of aquatic habitats, with most species requiring a specific habitat. Stagnant water isolated from predators is ideal. Examples of preferred habitats include saltmarshes, freshwater swamps, woodland pools, roadside ditches, catch basins, and items in backyards, such as clogged rain gutters, discarded tires, or unmaintained bird baths. Some species, such as Culex pipiens, remain close to their development sites and have a limited flight range of less than one-quarter mile. Other species, such as the common saltmarsh mosquito (Ochlerotatus sollicitans), can fly up to 40 miles from their saltmarsh habitats in search of an animal to feed on. 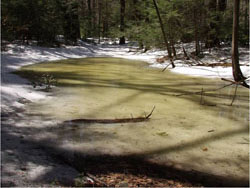 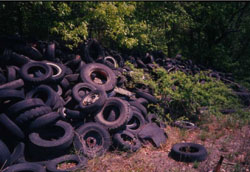 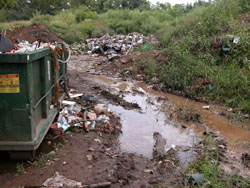 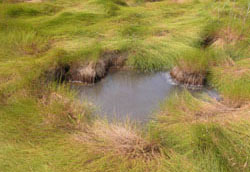