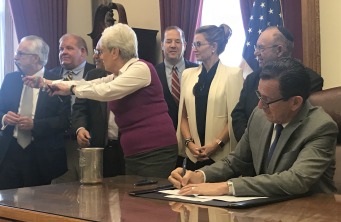 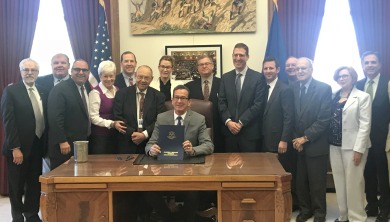 (HARTFORD, CT) – Governor Dannel P. Malloy today announced that he has signed into law legislation that adds Holocaust and genocide education and awareness to the required courses of study for public schools in Connecticut.

While the State Department of Education has made an optional course on these topics available to districts for years, not all schools have chosen to use it.

“It is incredibly disturbing that we have seen an uptick in hate crimes and hate speech over the last year – including assault, bomb threats, and vandalism – in nearly every region across our country,” Governor Malloy said. “Equally as disturbing are recent statistics showing that two-thirds of American millennials don’t know what Auschwitz is and 22 percent of millennials say they haven’t heard of the Holocaust. We are simply not doing enough to teach our young people the extreme and deadly mistakes of the past. Holocaust and genocide awareness are not just essential curriculum, but critical.”

“Young people must understand the devastating and permanent consequences of the Holocaust,” Lt. Governor Nancy Wyman said. “With soaring oratory and singular legislative actions that codified supremacy, the Nazis built an extermination machine that virtually wiped out East European Jewry. It’s critical that students are taught this history, not just to ensure their vigilance in preventing future genocide, but also so they recognize the opportunities they have every day to speak out against hate and injustice and recognize how racism happens. These small acts of good shape a future of equality – and they start with education.”

“Requiring this course of study will give our students a deeper and enduring understanding of the world changing events that were the Holocaust and other modern genocides but does so in way that is age-appropriate,” Education Commissioner Dianna R. Wentzell said. “In turn, our students will take this education and awareness and use it as they develop into informed, engaged and humane participants in civic life.”

“As a Holocaust survivor, educator, and spiritual leader in the Hartford community for the past 63 years, I am thrilled to see this historic legislation pass unanimously by the House and Senate and be signed into law by the Governor,” said Rabbi Philip Lazowski, who serves as a chaplain to the State Senate and has been one of the lead advocates for adopting this measure. “We must remember the horrors of the Holocaust and other genocides and teach our children so that such atrocities never happen again. Thanks to this bipartisan legislation, our children will learn about how to fight against hate, how to treat each other with humanity and make this world a better place. This is not only important for Connecticut, but can serve as a model throughout the nation. I urge teachers to fully embrace this important curriculum that will have a positive, lasting impact on generations to come.”

The new law requires all local and regional boards of education to include the topic in their social studies curriculum beginning in the 2018-19 school year. In developing and implementing the curriculum, the boards can use exiting and appropriate public or private materials, personnel, and other resources. They can also accept gifts, grants, and donations, including in-kind donations.

The legislation is Senate Bill 452, An Act Concerning the Inclusion of Holocaust and Genocide Education and Awareness in the Social Studies Curriculum. It was adopted by unanimous votes in both chambers of the Connecticut General Assembly.

Last year, Governor Malloy signed a law (Public Act 17-111) that strengthened Connecticut’s hate crime laws, making them among the strongest in the nation. That law, which made the commission of a hate crime a felony instead of a misdemeanor, came in response to recent incidents of hate across the country, including murders, assaults, bomb threats, and vandalism, directed against certain groups.