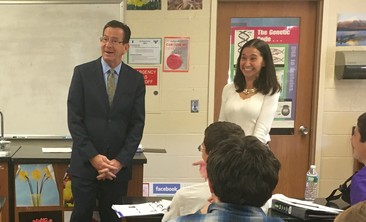 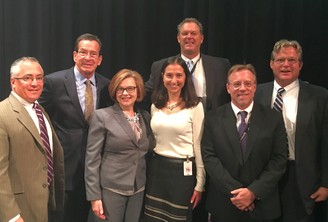 (NORTH BRANFORD, CT) - Governor Dannel P. Malloy today announced that Lauren Danner, a biology teacher from North Branford High School, has been named Connecticut's 2017 Teacher of the Year. State and local officials joined Mrs. Danner at her school today to deliver the good news to her students and colleagues.

Mrs. Danner is a general science and biology teacher and Science Department Leader at North Branford High School, where she has taught for the past seven years. Mrs. Danner's lessons involve activities and student discourse centered around real-world connections to scientific phenomena. She also regularly incorporates technology in her classroom as a strategy to increase student engagement and collaboration, while providing opportunities to assess and monitor student growth.

"Teachers make a real difference in the lives of students they serve," Governor Malloy said. "As a high school biology teacher, Mrs. Danner has the power to ignite a love of science that will carry her students far and hopefully inspire some of them to pursue careers in the fields of science, technology, engineering and math. Congratulations to Mrs. Danner on being named the 2017 Teacher of the Year and thank you to all of our teachers for the work that you do each day on behalf of Connecticut children."

"I want to congratulate Mrs. Danner and thank her for her commitment to our students," Lt. Governor Nancy Wyman said. "A strong education system depends on great teachers -professionals who encourage and motivate their students, who mentor and support newer educators, and who have a genuine love for teaching. Mrs. Danner sets an extraordinary example, and we are fortunate to have her."

"Being named the 2017 Connecticut Teacher of the Year is a tremendous honor and this recognition means so much to me and our entire school community," Mrs. Danner said. "The outpouring of support from students, families, faculty, and community members during the selection process has been overwhelming and the entire experience is something that I will always treasure. I am humbled and honored to be representing my phenomenal colleagues in North Branford as well as the hard-working and dedicated teachers across the state of Connecticut."

"Lauren Danner is an outstanding teacher and an inspiration to all of us who seek to deliver on the promise of an excellent education for every student," State Department of Education Commissioner Dianna R. Wentzell said. "Teachers play a critical role in preparing our students to take on big challenges and achieve success in school and beyond. Connecticut is fortunate to have a strong, dedicated teaching force committed to student success. Congratulations to Mrs. Danner on this incredible honor and thank you for inspiring our young people to be lifelong learners."

Mrs. Danner was chosen from among four finalists, 15 semifinalists, and over 100 district-level Teachers of the Year. A statewide council of former Teachers of the Year and representatives from educational organizations, businesses, and the community conducted the rigorous selection process, which includes on-site visits, candidate applications, interviews, and observations of teaching.

"On behalf of the Connecticut Teacher of the Year Council, we welcome Lauren to our family and know that she will be an excellent representative of teachers throughout our state," Connecticut Teacher of the Year Council President David Bosso said. "Like so many teachers, Lauren is a model of dedication, passion, and enthusiasm for the important work we do. I'm certain that her students, colleagues, family, friends, and entire community share in the pride that accompanies such recognition."

Mrs. Danner first became interested in a teaching career as she pursued a Bachelor of Science degree in Diagnostic Genetic Sciences from the University of Connecticut, working as a laboratory teaching assistant for the program. Upon graduating, she worked as a cytogenetic technologist at Mount Sinai Hospital, followed by a cell culture technologist position at Neurogen Corporation, where she was employed for ten years. Fueled by a passion of science and learning, she decided to return to school, receiving a Master of Science in Education from the University of New Haven.

She began her teaching career as an intern at Beecher Road School, a PK-6 elementary school in Woodbridge. Mrs. Danner completed her student teaching in eighth grade science at Bailey Middle School in West Haven and she is currently completing her seventh year of teaching in the North Branford School District at the high school. Mrs. Danner is known for creating a positive classroom environment where students have the opportunity and ability to succeed as members of a scientific community.

In addition to her teaching responsibilities, Mrs. Danner has served as the 9-12 Science Department Leader since 2014. She is a member of the North Branford High School Data Team, Faculty Council, and District Technology Team. In 2012, she was nominated by a student and won a nationwide contest entitled, "Here Comes the Boom-Most Inspirational Teacher." She was awarded $10,000, designated for extracurricular activities at the high school.

"Lauren Danner is an inspiration to everyone involved in the educational process and beyond," North Branford Superintendent Scott Schoonmaker said. "Her commitment and dedication to her students is unprecedented. I feel fortunate to have had the opportunity to watch her grow into the educator and person that she is."

"Lauren Danner is a model for all of us in the field of education to follow," North Branford High School Principal Todd Stoeffler said. "She remains current regarding curriculum advances in the field of science and is always able and successful when implementing new strategies. She continues to be an advocate for all students. She truly is a professional who typifies the traits we would all expect in the State Teacher of the Year."