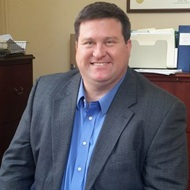 Matt Streeter has always believed in a common sense approach to government. He adopted that philosophy when he began his career in government and public service in 1987 and he carries it with him in his newest role, that of a member of the Freedom of Information Commission.
"Regardless of the role I was in, I always believed in open and accessible government. I viewed it as common sense, something vital to making our Democracy work," Streeter says.
Streeter has been an FOI Commissioner since being appointed by House Minority Leader Larry Cafero in February of 2012. But his views on government have been shaped through a variety of different endeavors. Professionally, he has worked as both an assistant to a town manager (in Mansfield, Ct.) and as a town manager (in Palmer, Ma.) He was Palmer's town manager from 2008-2010 and its interim treasurer from 2008-2009.
His approach to good government has been molded through years of tireless volunteer work in the town of South Windsor, where he resides with his wife and children. He was first elected to public office in 1987 and served until 2008. He has been a member of the town council, the deputy mayor and a two-term mayor just to name a few posts he has held down in his career. Prior to launching his career in government, he earned degrees in public financial management and public and non-profit management from the University of Connecticut in West Hartford.
Suffice it to say he has seen government in action from many vantage points. And has his point of view changed now that he is a Freedom of Information Commissioner?
"I've always believed in being fair. One of the best ways to do that is to be as open as possible," Streeter says.
Streeter says that sitting on the FOI Commission has given him a different view but not necessarily changed his perspective.
"When I was a town manager, I believed in giving out as much as I possibly could. In fact, it wasn't until I came to FOI that I realized that there are quite so many exemptions to disclosure," he says. "I always believed that people were basically fair. I think everyone realizes that you can't satisfy everyone all the time. I've had some interesting cases, but the hearings have not been as contentious as I might have thought they would be. For the most part, people believe in doing what's right."
Streeter is rapidly becoming an FOI workhorse. Since his appointment in 2012, he has never missed a commission meeting, been a hearing officer in more than 20 cases and testified on behalf of the FOIC in front of the legislature.
"It has been immensely rewarding," he says. "I'm working with good people at the FOIC and it's an important to be a part of open and accessible government."