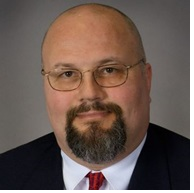 When Chris Hankins was tapped to become a member of the Freedom of Information Commission, he was no FOI novice. Unlike some “rookie” commissioners, Hankins brought a wealth of FOI-related experience with him to the commission when he became a member in March of 2013.
From December of 1988 to December, 2001, Hankins served the city of Meriden as legal counsel, first as a staff attorney and, for the last seven years of his tenure, as deputy city attorney. In that capacity, he was called on to advise city departments on filling FOI requests for documents, following FOI protocol for meetings and other FOI matters. Occasionally, Hankins would represent the city in front of the commission should a complaint be filed. He even helped develop a model formula for determining indigence as it applies to FOI requests which, he proudly says, many other jurisdictions now use.
“I never really looked at (FOI) as something adversarial,” Hankins says of his time in Meriden. “Someone wants something and you give it to them. That was my philosophy if we were dealing with public records.”
But then, when he left Meriden to become Legal Counsel for the Connecticut Education Association, he found that some in the public sector didn’t share the philosophy he adopted in Meriden. So he took on another role, that of the complainant, representing the statewide education association before the FOI Commission when it believes it has been improperly denied access to public records or a public meeting.
Talk about seeing both sides. Clearly that made the next step an obvious one. “Yes, for sure I had multiple cases at the commission,” he says. “And then to be asked to be a commissioner was a tremendous honor for someone who had been doing FOI work since 1988. Being a commissioner really allows me to see FOI from all sides.”
The wealth of FOI experience Hankins now brings to the commission is supplemented by some of his other life experiences. After earning a B.A and an M.B.A from the University of Rhode Island, he earned his law degree from the University of Connecticut in 1984 and worked as both an assistant court clerk and private practice attorney before joining the Meriden legal staff. Hankins also served as a member of several boards in East Haddam where he lives and was an attorney arbitrator for four years from 1997 to 2001. Those experiences, he feels, also prepared him for his role as an FOI Commissioner.
“As an arbitrator, I learned how to listen to both sides and from an FOI perspective, having been on both sides of an issue, I think I appreciate the importance of giving both sides a fair shake,” he says. “I think people appreciate that, even if they are unsuccessful. If you are respectful and hear what they have to say, they are satisfied.”
Hankins says that he has drawn a “bright red line” when it comes to cases involving matters related to education. He will not hear any cases involving any teachers or school district he might have to deal with as CEA’s legal counsel. He also recuses himself when such a matter comes before the commission for discussion and a vote.  Although that might be considered difficult or awkward, Hankins says he must remove himself in the name of fairness.  And those recusals haven’t stopped Hankins from becoming a frequent hearing officer in other matters as well as a visible commission member at meetings and other functions.
“Like I said, I was honored to be asked to serve and I really enjoy it,” he says. His new role in the FOI universe is, he says, a culmination of where he felt his career had always taken him.
“It’s an opportunity to help people and by extension, to make sure that government is open and accessible. It’s good for everyone,” he says.  “And I have to say that I have never seen a more dedicated group of public sector employees as I have at the FOI Commission. It’s really a delight to work with them and with my fellow commissioners.”