Babesiosis is a tick-borne disease caused by microscopic parasites that infect red blood cells (1) and is the second most commonly reported tick-borne disease in Connecticut. Although there are over 100 species of tick-borne parasites that can cause babesiosis, Babesia microti is the most frequently found species in the United States that affects people. Babesiosis is primarily spread by the bite of an infected Ixodes scapularis, blacklegged tick; however, less commonly, B. microti can be transmitted through blood transfusion, and transplacentally from an infected mother to her baby during pregnancy or delivery (1,2). Most healthy individuals infected with B. microti are asymptomatic. Others can develop flu-like symptoms including fever, chills, sweats, myalgia, and weakness. It can be life threatening in the elderly, people who are immunocompromised or have serious underlying health conditions, and people without a spleen (asplenia). General laboratory findings include decreased hematocrit due to hemolytic anemia, and thrombocytopenia.

In Connecticut, the first cases of babesiosis were reported in 1988 (3). Babesiosis has been a physician reportable disease since 1989, and Babesia a laboratory reportable finding since 1990. In 2011, babesiosis became a nationally notifiable disease (4). The Connecticut Department of Public Health (DPH) uses the babesiosis national surveillance case definition, that combines laboratory, clinical, and epidemiologic information, to classify cases.

Due to the need for clinical information to determine case classification, DPH conducts follow up on all positive results meeting the national surveillance case definition laboratory criteria for diagnosis. Supplemental forms, and letters requesting full completion and return, are mailed to ordering providers and hospital Infection Control Practitioners.

During 2015–2019, the number of reports received annually by DPH increased 80% from 766 to 1380 (Figure). Follow up was conducted on 5260 reports with supportive or confirmatory laboratory results. Supplemental forms were returned for 3893 (74%) and included 1219 (31%) confirmed cases, 304 (8%) probable cases, and 2370 (61%) were classified as not a case (Figure). The remaining 1367 were classified as suspect. Further analyses were conducted by grouping confirmed and probable classifications for a total of 1523 cases.

The American Red Cross screens blood donations and reports donors identified to have a positive NAAT test for babesiosis. During 2015–2019, DPH received 421 reports of blood donors with positive Babesia screenings. Data linking blood donation to a case were not available as DPH did not receive any reports of confirmed or probable cases that were recipients of blood, organ, or tissue products, and no organ donors were identified (6). Blood donation was not reported from provider offices, which suggests this information was not available or not collected.

When people are outdoors, steps should be taken to reduce the risk for babesiosis and other tick-borne diseases. Areas where ticks are commonly found, such as wooded and tall grassy areas, should be avoided if possible, especially during warmer months. Using personal protective clothing (i.e wearing long sleeve shirts and long pants to decrease the area of exposed skin) and tick repellents according to label instructions is also recommended for all persons when outdoors. It is critical to check for ticks on clothing and skin and to check pets for ticks when returning indoors.

Data show that babesiosis is underreported (7). Babesiosis is transmitted by the same tick species as Lyme disease and anaplasmosis. All three illnesses can cause general flu-like symptoms, share geographic locations, and peak during the summer months. When evaluating patients with flu-like symptoms suggestive of tick-borne illness, especially during the summer months, providers should consider ordering a tick-borne disease panel for purposes of differential diagnosis. DPH encourages providers to complete the necessary reporting forms for all tick-borne diseases, including the supplemental Babesiosis Case Report form and return it to DPH in a timely manner. Completed forms can be mailed to the CT Dept. of Public Health, 410 Capitol Avenue, MS#11EPI, PO Box 340308, Hartford CT, 06134-0308 in an envelope marked “Confidential” or faxed to 860-509-7910. Only one method of reporting is necessary. 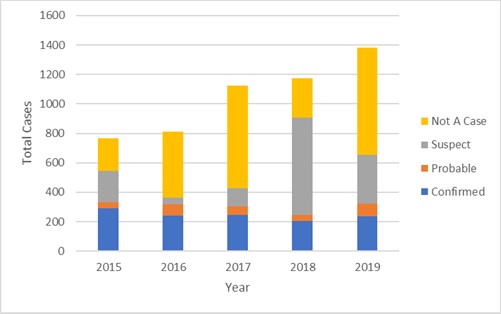