Animal rabies is an important public health concern because of the potential for human infection. The virus is transmitted primarily through bites from an infected animal; less commonly, the virus can be transmitted by infectious saliva or central nervous system tissue contacting open wounds or mucus membranes. The principle reservoir species in the United States include bats, raccoons, skunks, and foxes (1). Coyotes, bobcats, woodchucks, and other large mammals may also develop and transmit rabies. Small rodents such as squirrels, chipmunks, mice, and rats are not considered rabies vectors as they are unlikely to survive an attack by a rabid animal.

The rabies virus infects the nervous system and the disease is fatal to wild animals and unvaccinated domestic animals. In humans, once clinical disease develops the infection is nearly always fatal. Clinical  illness  can  be  prevented  by conducting  a  thorough  risk  assessment  based  on The Advisory Committee on Immunization Practices (ACIP) national  guidelines and appropriate administration of rabies post-exposure  prophylaxis  (rPEP) if indicated (2).

To assist decision making regarding rPEP, the Connecticut Department of Public Health (CT DPH) State Public Health Laboratory (SPHL) offers testing of animals that could have exposed people to the rabies virus. In July 2016, modifications to rabies testing requirements at SPHL that emphasized testing only animals involved in potential human exposures were fully implemented (3). Although the changes were initiated mid-year, the number of animals tested at the SPHL in 2016 decreased by 37% relative to 2015 (3).

Among all animals tested, 171 (4%) tested positive. Those testing positive included 112 (66%) wild terrestrial animals, 43 (25%) bats, and 16 (9%) domestic animals. Overall, positivity rates varied by species and included 37% of foxes, 36% of raccoons, 19% of skunks, 11% of domestic cattle, 8% of groundhogs, 2% of bats, 1% of cats, and <1% dogs. Testing was not performed on 138 (3%) specimens and results were indeterminant or unsatisfactory for 10 (<1%) specimens. The most likely causes were poor handling of the carcass (significant decomposition), poor sample size, or method used when euthanizing the animal. A combined total of 77 animals not considered to be rabies vectors were submitted for testing including 54 (71%) squirrels and 14 (18%) chipmunks (Table). None tested positive for rabies virus.

The 2016 changes to rabies testing guidance led to an initial 37% reduction in the number of animals submitted when compared to the previous year’s data, thus reducing the burden for rabies testing at SPHL. Since then, the number of animals submitted for testing and proportion of positive test results has trended downward. Nearly one-half of animals tested at SPHL continues to be cats and dogs. This is likely because domesticated animals have higher likelihood of human interaction and are more often available for testing after a potential human exposure. During 2017-2020, a combined annual average of 540 cats and dogs were submitted for rabies testing, a 16% decrease over 2016 data. Of those, 99% indicated human exposure with 78% reporting a bite exposure. Those submissions not indicating human exposure showed a domestic animal was exposed to potentially rabid wild animals.

During 2017-2020, data show the SPHL continues to receive animals that are considered unlikely to be infected by rabies virus including chipmunks, mice, moles, rabbits, shrews, and squirrels. Although these represent 1.7% of all submissions during that period, this unnecessary testing still impacts public health resources.

In Connecticut, domestic animal bites are reportable by the victim to local animal control or to the Department of Agriculture. Vaccination of domestic animals, avoiding contact with wildlife, and maintaining cats and dogs under supervision while outside are essential to preventing rabies exposures. The DPH will work to provide rabies information to the public to educate and outline the importance of staying away from wild animals, bats, and unfamiliar domestic animals. Education about what is considered an exposure, and what is not, may help prevent unnecessary animal testing and rPEP administration.

The rabies statistics presented here only reflect animals tested at SPHL. Animals not involved in potential human exposure, or are not considered to be rabies vectors, can be tested for a fee at the Connecticut Veterinary Medical Diagnostic Laboratory, University of Connecticut. Information concerning service and guidelines, as well as tests and fees for animal rabies testing is available at: http://cvmdl.uconn.edu/ or by calling 860-486-3738.

Healthcare providers, veterinarians, or animal control professionals with questions about possible human exposure to rabies or administration of rPEP should call the DPH Epidemiology and Emerging Infections Program at 860-509-7994. Healthcare providers may also consult the ACIP Recommendations of 2008 and 2010 (2); veterinarians and animal control professionals may also consult the Compendium of Animal Rabies Prevention and Control (4). For questions about domestic animal exposures to rabies, contact local animal control or the Department of Agriculture Animal Control Division at 860-713-2506. 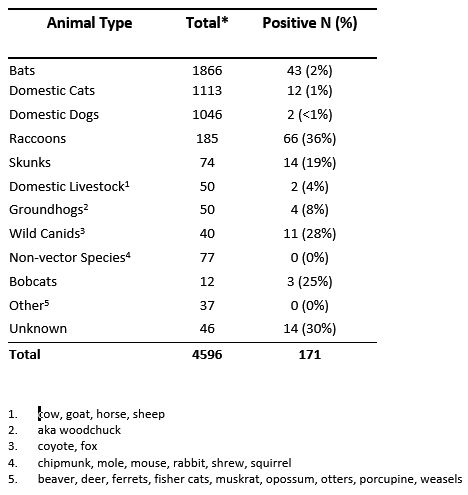 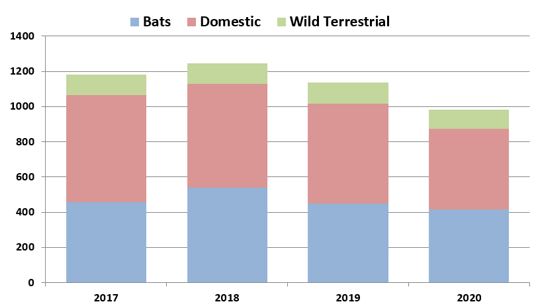