June 24, 2022: The Centers for Disease Control and Prevention has listed Fairfield, Hartford, New London, Middlesex, Tolland, and Windham Counties in Low/Green the as part of its COVID-19 Community Levels Map. Only Litchfield, Middlesex and New Haven County are listed in the Medium/Yellow category. Residents who live in the Medium /Yellow counties who are at a high risk for severe illness, should talk to their health care provider about whether to wear a mask and take other precautions. These residents should stay up to date with their COVID-19 vaccines and get tested if they have symptoms. Visit the CDC COVID-19 Community Levels Map for updates.

Human Arboviral Disease Awareness for the 2021 Season in Connecticut

In Connecticut, arthropod-borne viruses, or arboviruses, are transmitted to humans primarily through the bite of infected mosquitoes and ticks. Mosquitoes transmit West Nile virus (WNV) and Eastern Equine Encephalitis virus (EEEV), which are the most commonly reported locally acquired arboviral diseases in Connecticut, and Jamestown Canyon virus (JCV), a less commonly reported infection. During 2000–2020, 159 locally-acquired cases of WNV disease, 5 cases of EEEV disease, and 1 case of JCV disease were reported (Figure). Powassan virus (POWV), an emerging arbovirus in Connecticut, is transmitted through the bite of an infected Ixodes scapularis, more commonly known as the Blacklegged or deer tick. Ten POWV disease cases were reported during 2016–2020 (Figure) (1).

While many infections with these viruses may be asymptomatic or result in a flu-like illness, a small percentage of people progress to develop severe disease and meningitis or encephalitis (neuroinvasive disease). Infants can have a sudden onset of encephalitis. Signs and symptoms of WNV and EEEV most commonly begin 2-6 and 4-10 days after being bitten by an infected mosquito, respectively. Approximately 1 in 10 cases of neuroinvasive WNV disease and one-third of neuroinvasive EEEV disease cases are fatal. Infection with JCV typically results in milder disease and is rarely fatal. Signs and symptoms of POWV begin 1 to 4 weeks after a bite from an infected tick; there is evidence that transmission of the virus can occur within 15 minutes of tick attachment. Approximately 1 in 10 cases of neuroinvasive POWV disease are fatal, and survivors of neuroinvasive arboviral disease often experience long-term neurologic impairments.

Healthcare providers should consider arboviral infections as a potential diagnosis for patients presenting with sudden onset of fever, headache, vomiting, malaise, arthralgia, myalgia, or acute neurological syndromes, particularly with a history of potential exposure to mosquitoes or ticks. Mosquito-borne arboviral infections in Connecticut are most likely to occur during late July through early October (2,3); POWV infections can occur from early spring into late fall (1).

The incidence of arboviral infections varies from year to year and is influenced by many factors including weather, mosquito and tick populations, and human behavior. Because of this, it is difficult to determine how many people will develop illness each year or where infections will be acquired. However, human cases of WNV and EEEV disease are typically preceded by positive mosquito findings and disease in animals (2,3). The Connecticut Agricultural Experiment Station conducts mosquito trapping and testing across the state during June through October. The locations of infected mosquitoes and reported cases of EEEV and WNV disease in animals and humans are updated weekly and provide an indicator of risk level in an area.

Residents, healthcare providers, and local officials are encouraged to monitor mosquito-borne arboviral activity in their towns and in neighboring areas. When surveillance data and press releases indicate the presence of WNV or EEEV activity, residents should take precautions to avoid mosquito bites and healthcare providers should have heightened awareness of the possibility of arboviral infections.

The most effective way to prevent infection with these viruses is to avoid mosquito and tick bites. Bites can be prevented by using EPA registered insect repellants, knowing when and where mosquitoes and ticks are likely to be, and wearing light-colored long-sleeved shirts and long pants when outdoors (4,5). In addition, for POWV, prevention includes checking clothing, gear, people, and pets for ticks after being outdoors (4). Taking a shower within two hours of coming indoors will help remove any ticks that have not yet attached. Preventive measures are particularly important for older people who are at the highest risk for developing severe illnesses.

Diagnosis of arboviral infections is through detection of IgM antibody in serum or CSF followed by confirmatory Plaque Reduction Neutralization Test (PRNT). Testing at the State Public Health Laboratory (SPHL) is available and provides timely (approximately 48 hours) preliminary results for clinicians and public health professionals. The SPHL Arboviral Panel includes EEEV, WNV, St. Louis Encephalitis virus (SLEV), and POWV. EEEV, WNV, and SLEV IgM Microsphere Immunoassay (MIA) are performed at SPHL. Samples found to be positive for WNV IgM at the SPHL are considered confirmatory. Samples found to be presumptive positive for EEEV or SLEV IgM MIA are sent to the Centers for Disease Control and Prevention (CDC) for confirmatory PRNT; negative samples are forwarded to CDC for POWV testing. Specific guidelines for submitting samples can be found on the SPHL website. For questions about specimen collection or handling, contact the Virology laboratory at 860-920-6662 or Christina Langer, Virology/Serology Supervisor, at 860-920-6647, christina.langer@ct.gov. 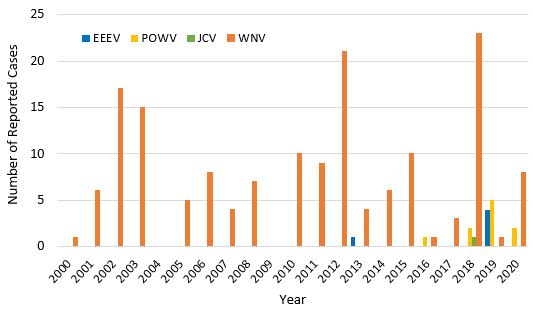