Human granulocytic anaplasmosis is a tickborne zoonosis caused by the bacterium Anaplasma phagocytophilum. In Connecticut, humans become infected through the bite of an infected blacklegged tick, Ixodes scapularis. Signs and symptoms of anaplasmosis are nonspecific and may include fever, chills, headache, and malaise (1). Although rare, severe illness or even death can occur. Common laboratory findings associated with anaplasmosis include thrombocytopenia, leukopenia, or increased levels of liver enzymes (1).

The Connecticut Department of Public Health (CTDPH) has conducted surveillance for anaplasmosis since 1995 (2). Through 2013, healthcare providers were required to provide clinical information by completing and returning a supplemental follow-up form sent to them by CTDPH. This clinical follow-up was discontinued in 2014 because response rates from providers were low and disease incidence was steady. Starting in 2014, laboratories were required to report only positive PCR results. For this report, a confirmed case was defined as having a positive A. phagocytophilum PCR.

The spatial distribution of cases as indicated by zip code gradually shifted from the northeastern region of Connecticut to the western region. From 2014–2018, there was a higher proportion of cases with county of residence in Windham County (17.3%) compared to 2019 (1.9%). In 2014, 32.3% of cases were reported in Windham County. In 2019, most cases were reported in Fairfield (45.4%) and Litchfield (31.7%) counties.

In 2019, there was a nearly 3-fold increase in the number of reported anaplasmosis cases compared to 2014–2018. While demographic and temporal trends were similar from year to year, there were notable changes in spatial distribution of cases by county and zip code of residence.

During 2014–2019, distribution of cases by age and gender parallel those previously reported by CTDPH and other health agencies (2,3).The higher number of cases observed in older age groups may reflect an association between disease severity and age and therefore increased testing in this population; during 2008–2012, national data showed hospitalizations, life-threatening complications, and case fatality rates increased with age (1).

The seasonal distribution of cases also mirrors what has been previously observed (3). Most reported cases of anaplasmosis occurred during summer months, resembling the temporal distribution of other tick-borne diseases transmitted by the same vector, such as Lyme disease. The peak in cases corresponds with the feeding stage of nymphal I. scapularis and increased outdoor human activity. The smaller fall peak that was observed in some years corresponds with adult tick activity (3).

Shifts in underlying environmental factors, such as forest fragmentation and climate change may impact habitat suitability for tick vectors and could have caused the shift in spatial distribution seen in 2019. It is also possible that the shift may be an artefact of case testing and reporting. Changes in provider ordering patterns could also account for differences in case counts in eastern and western Connecticut during 2014–2019.

Results may also reflect a true increase in cases. In recent years, health departments in other New England states also observed increases in anaplasmosis cases (4). Surveillance should include enhanced clinical follow-up, systematic active statewide tick surveillance to understand changes in distribution and abundance of I. scapularis, and pathogen testing of collected ticks to evaluate changes in the proportion carrying A. phagocytophilum. The Connecticut Agricultural Experiment Station has conducted passive tick surveillance since 1990 and began active statewide surveillance in 2019 (5).

In 2020, clinical follow-up conducted by CTDPH resumed. Healthcare providers’ assistance in collecting clinical data for anaplasmosis is critical to further characterize the full clinical spectrum and epidemiology of this disease in Connecticut. Providers should be aware of the increased incidence of anaplasmosis during summer months and late fall and remain cognizant that symptoms of anaplasmosis pose similarities to those of other diseases, including COVID-19 and influenza. 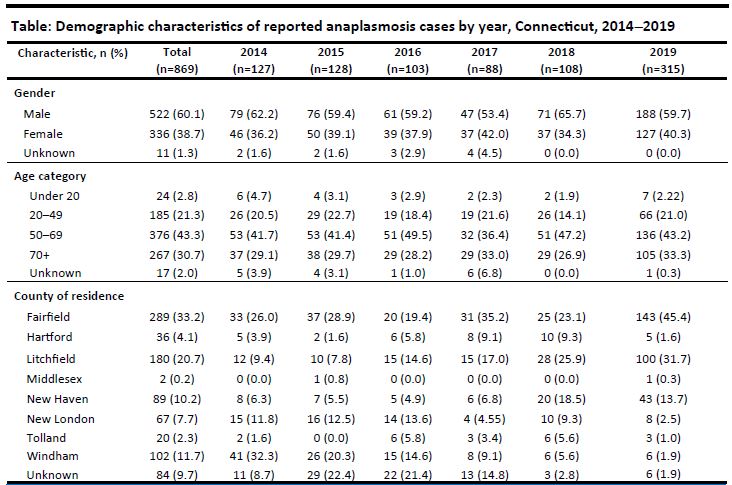 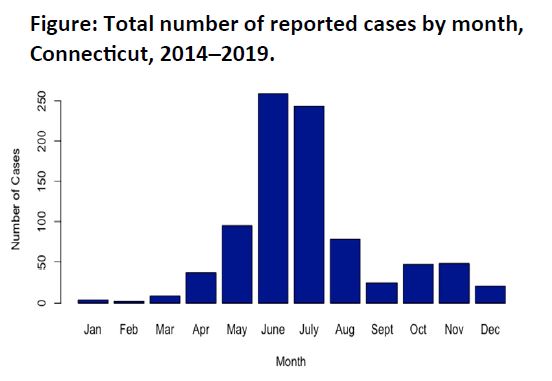