The Route 111/15 Interchange is located in the southwest corner of Trumbull, approximately 0.40 miles north of the Bridgeport city line. Route 15 (Merritt Parkway) is on the National Register of Historic Places and has been designated a Scenic Road. The project included the replacement and replication of a historic concrete rigid frame bridge and the reconfiguration of the existing on and off-ramps into the first Single Point Interchange (SPI) in Connecticut. Completed in fall 2003, the Connecticut Department of Transportation has selected the project as its entry for the National Partnership for Highway Quality "2004 Making a Difference Award". 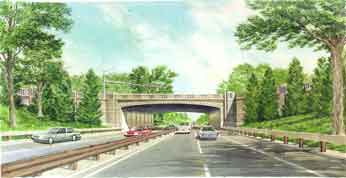 This project included the replacement of the single span concrete rigid frame bridge and constructed an underpass Single Point Interchange (SPI) with the major crossroad, Route 15, passing under Route 111. The SPI is a grade-separated interchange that provides added capacity in restricted rights of way. The principal operational feature of an SPI is that it has only one signalized intersection through which all four left turns operate with the opposing left turns inside one another. The geometry of the SPI is directly influenced by the design speed of the left turns, consequently, the radii of the turns has a direct impact on the width of the bridge structure. The new structure has approximately a 20 meter span and a width of 47.5 meters.

The SPI provides dual left and right turns from both exit ramps, separated by raised islands. The Route 111 Southbound approach tapes from the two existing lanes to three 3.35 meter lanes, an exclusive left turn, a thru lane and a shared thru/right turn lane. The Northbound approach expands from the two existing lanes to four 3.35 meter lanes, an exclusive left turn, two thru lanes and an exclusive right turn lane. The right turn lane exists prior to the signalized intersection. The alignment of the left turn approaches and departures on the ramps create a template for the curved retaining walls.

The left turning movement geometry was designed for a minimum design speed of 40 km/h. This design speed allows the proposed SPI to minimize the impact of the restrictive rights of way, as well as the width of the proposed bridge.

The designer, Parsons, Brinckerhoff, Quade & Douglas, Inc. and contractor O & G worked together to finish the project 11 months ahead of schedule by initiating a value engineering concept that included a detour of night time traffic up and over the existing ramps.