along the hartford line corridor

in advance of the hartford line Rail Service launch

even before the launch of the Hartford Line on June 16th 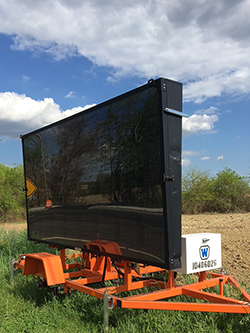 (NEWINGTON, CT) –The Connecticut Department of Transportation (CTDOT) today announced that it will place electronic signs which will display rail safety messages to drivers at street-level rail crossings along the Hartford Line corridor.

There will be a steady increase in rail traffic on the Hartford Line corridor throughout the month of June as the number of daily test trains will surge in preparation for the new Hartford Line service. The electronic signs will display messages that alert drivers to the increase in daily trains and remind them to obey traffic laws when navigating street-level rail crossings.

“With the increase in rail traffic, the Connecticut Department of Transportation wants to remind the public to obey the law at rail crossings. People may not always remember that trains cannot stop quickly. In fact, it can take a mile for a train to come to a complete stop. Drivers should never attempt to drive under or around a closing or closed gate at a street-level rail crossing,” stated CTDOT Commissioner James Redeker.

This initiative is part of CTDOT’s commitment to Operation Lifesaver – a national educational and awareness campaign around safety at railroad crossings.

The first set of electronic signs were installed at four street-level rail crossings in Windsor on Tuesday where they will remain for a week. Every Tuesday, the electronic signs will be moved to different street-level rail crossings, which will allow the signs to be stationed at a majority of the Hartford Line crossings in Connecticut prior to service launch.

“Next month, Connecticut residents, businesses, and visitors will benefit from the new Hartford Line rail service. The impact of the Hartford Line will be significant for Connecticut’s quality of life, economy, environment, and desirability as a place to live and work,” said Commissioner Redeker.

When the Hartford Line service begins on June 16, 2018, it will provide travelers with fast, convenient, and reliable regional passenger rail service throughout the I-91 corridor, with connections to other regional public transit (rail and bus) services. Weekday roundtrip rail service on the Hartford Line will increase significantly, from six to 17 trips per day between New Haven and Hartford, and increasing from six to 12 trips per day between Hartford and Springfield.