The Merritt Parkway extends for 37.27 miles as Connecticut State Route 15 from the New York State line in Greenwich, to the southern edge of the Sikorsky Bridge in Stratford, which overpasses the Housatonic River.  Running almost parallel to Interstate 95, approximately 10 miles to the North, the Merritt Parkway was initially conceived to relieve congestion on Route 1, which also runs parallel to the other roadways. It serves as an important commuter corridor as well as being a popular alternative route for cars to enter New England from points south.

The entire Merritt Parkway corridor is on the National Historic Register and is accentuated by 66 distinct bridges in the Art Deco, Art Moderne, or other styles.  The Parkway's alignment traverses many hills and bends in response to the natural topography of the surrounding landscape. Ultimately, the trail, depending upon the final alignment, would require crossing forty-nine local roads, most or all of which are envisioned to be at at-grade.

The communitiesalong the parkway include: Greenwich, Stamford, New Canaan, Norwalk, Westport, Fairfield, Trumbull and Stratford. The project study area is primarily within the State right-of-way and every effort will be made to minimize impacts beyond it. However, in order to assess the trail’s indirect impacts, as well as to identify possible alternate routes along the corridor, the study will be integrated with local plans of Conservation and Development and consider linkages to Town centers, parks, schools, transit routes, open space, and north-south greenways. Some of the trails in this area, either existing or in some phase of planning include the Mianus River Greenway in Stamford and Greenwich, the Rippowam/Mill River Greenway in Stamford, the Norwalk River Valley Trail and the Pequonnock Trail in Trumbull. 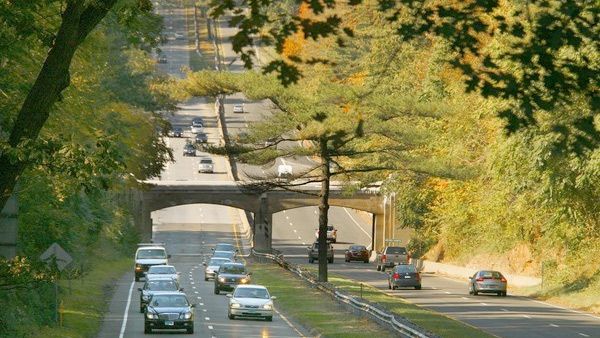 The neighborhoods outside the trail corridor each possess a unique character, and many of the cross streets are small in scale and wooded. Residents enjoy a sense of privacy despite proximity to the heavily traveled state route.  These qualities must be considered in detail and preserved to the extent practical if the process were to move forward. This study will closely review all these issues along with the design and safety of at grade crossings of the various cross roads. Through public involvement, the concerns of those impacted by the envisioned trail will be included in the study analysis and conceptual solutions.

The trail corridor lies between the roadway and abutting properties, which are a mix of residential, commercial, and town owned open space. The landscape character within the corridor varies, but in many areas are wooded, which for many years has helped to provide a buffer for adjacent residents. The Merritt Parkway was built within the northern 100 feet of a 300 foot wide right of way. The typical cross-section shows a trail roughly centered within the state right-of-way on the south side of the Parkway. The major goal of the study is to determine the best possible conceptual alignment, based upon all the factors included in the inventory and analysis.  As the study progresses, several different typical cross-sections may be developed based on topographical conditions.

The study will involve an inventory of all wetlands and watercourses along the Merritt Parkway, of which there are many.  Some, such as the Saugatuck and Mill Rivers, are quite substantial. This portion of the environmental assessment will also consider potential impacts to existing wildlife or other important ecological resources.

All natural and cultural resources will be inventoried.  These include but are not limited to: specimen trees, significant plant communities, stone walls and rock outcrops. Areas of potential archeological resources will be identified and given closer investigation where needed. Scenic resources and a visual inventory will be prepared, and is described in greater detail on the NEPA page.

The study will also consider aspects of safety, traffic and maintenance for all users as the potential trail corridor integrates with the Merritt Parkway.

This comprehensive study and public involvement is necessary to determie whether such a facility could be developed while preserving and enhancing the quality of life for nearby residents and protecting the historic integrity of the Parkway.