Removal of Traffic Signals on Route 9
and Main Street Improvements
About the Project
The Connecticut Department of Transportation (Department) is currently developing plans to remove two traffic signals on Route 9 as well as plans to improve pedestrian safety and reduce congestion along Main Street in downtown Middletown. A summary of the public involvement efforts as well as a detailed project description is below.

If you wish to be added to an email list for project updates please send an email to DOT.Rte9Middletown@ct.gov. 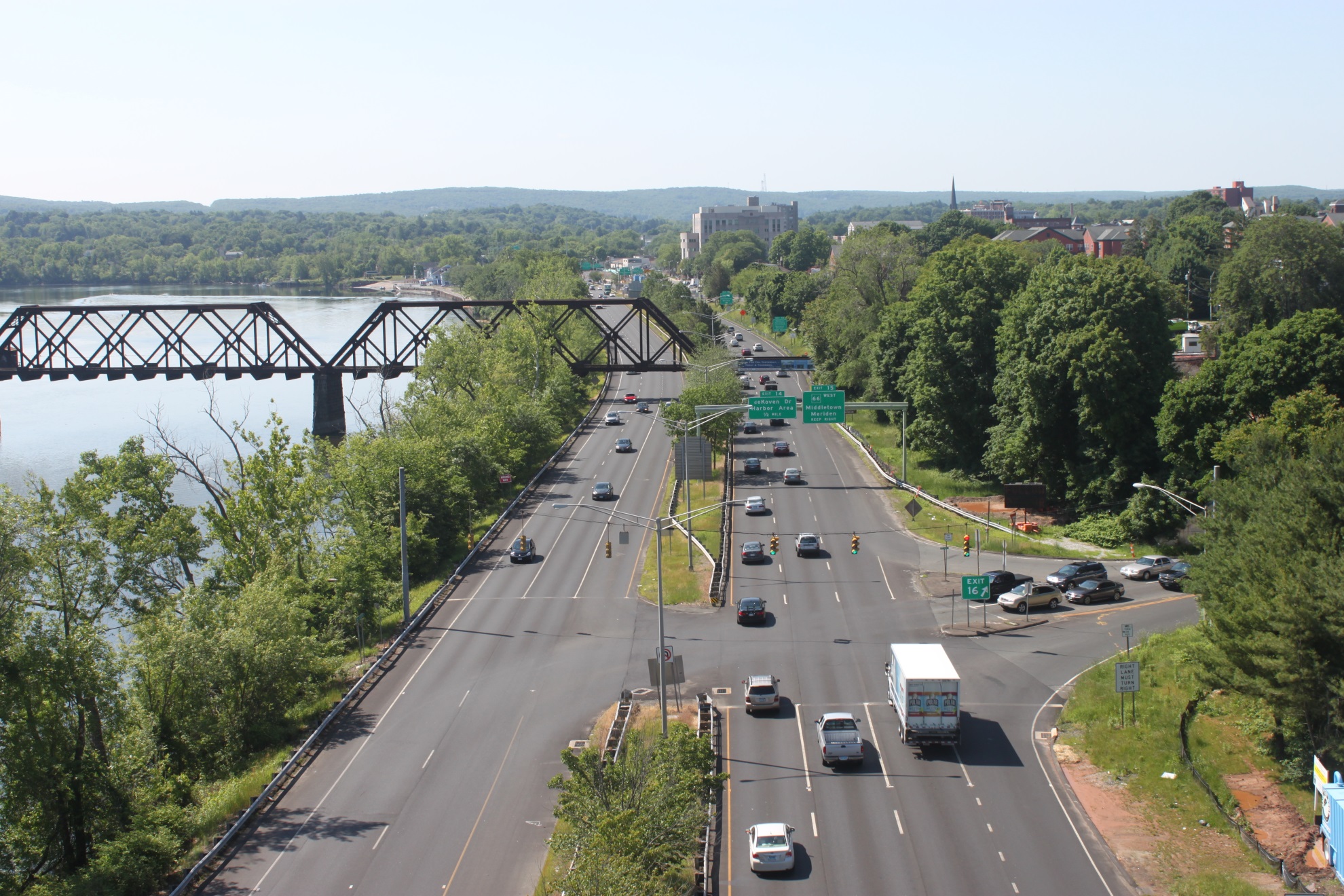 The Department presented a design to remove the traffic signals on Route 9 by elevating Route 9 southbound in two locations; the intersection of Hartford Avenue and Route 9 as well as the intersection of Washington Street and Route 9. The meeting was well attended and a two-week comment period yielded two main concerns:

w The effect of the additional traffic on Main Street, despite the operational benefits of the proposed bumpouts
w The view obstruction of the Connecticut River by the southern elevated section of Route 9 southbound

Subsequent to this meeting, the Department met with City of Middletown (City) officials to discuss scope modifications. Several alternatives were developed to address the concerns of the public. After meetings with the City, impacted property owners, and critical stakeholders the Department has scheduled a second public informational meeting.
Second Public Informational Meeting – March 22, 2018 - Plans

The Connecticut Department of Transportation (Department) will conduct a Public Informational Meeting and Connecticut Environmental Policy Act (CEPA) Scoping Meeting concerning the proposed modifications to Route 9 in the City of Middletown, including the removal of the traffic signals on Route 9 and Intersection improvements along Main Street on Thursday, March 22, 2018 (Snow Date: March 23, 2018) at the Middletown High School Auditorium, 200 La Rosa Lane, Middletown, Connecticut. A formal presentation will begin at 7:00 p.m.

Project 0082-0318 is proposed to reduce congestion, improve safety, and improve access to downtown Middletown by removing two existing traffic signals on Route 9. Connecticut Route 9 is a north/south running freeway except for a short section of non-freeway in the downtown Middletown area where it overlaps with Route 17. This section of Route 9 stretches for approximately 0.36 miles (from exit 15 to exit 16) and includes two at-grade signalized intersections. These signalized intersections contribute to significant delays and crashes. The most recent three year crash history (January 2015 to December 2017) shows that there were 313 crashes resulting in 91 injuries including 1 fatality within the project limits.

In order to provide access to downtown Middletown from Route 9 northbound, a bridge will be constructed to convey northbound vehicles over Route 9 southbound as well as the railroad tracks and yard. The off-ramp will intersect Rapallo Avenue at a new signalized intersection. To the west of this intersection Rapallo Avenue will be one way towards Main Street while two-way travel will be maintained to the east. 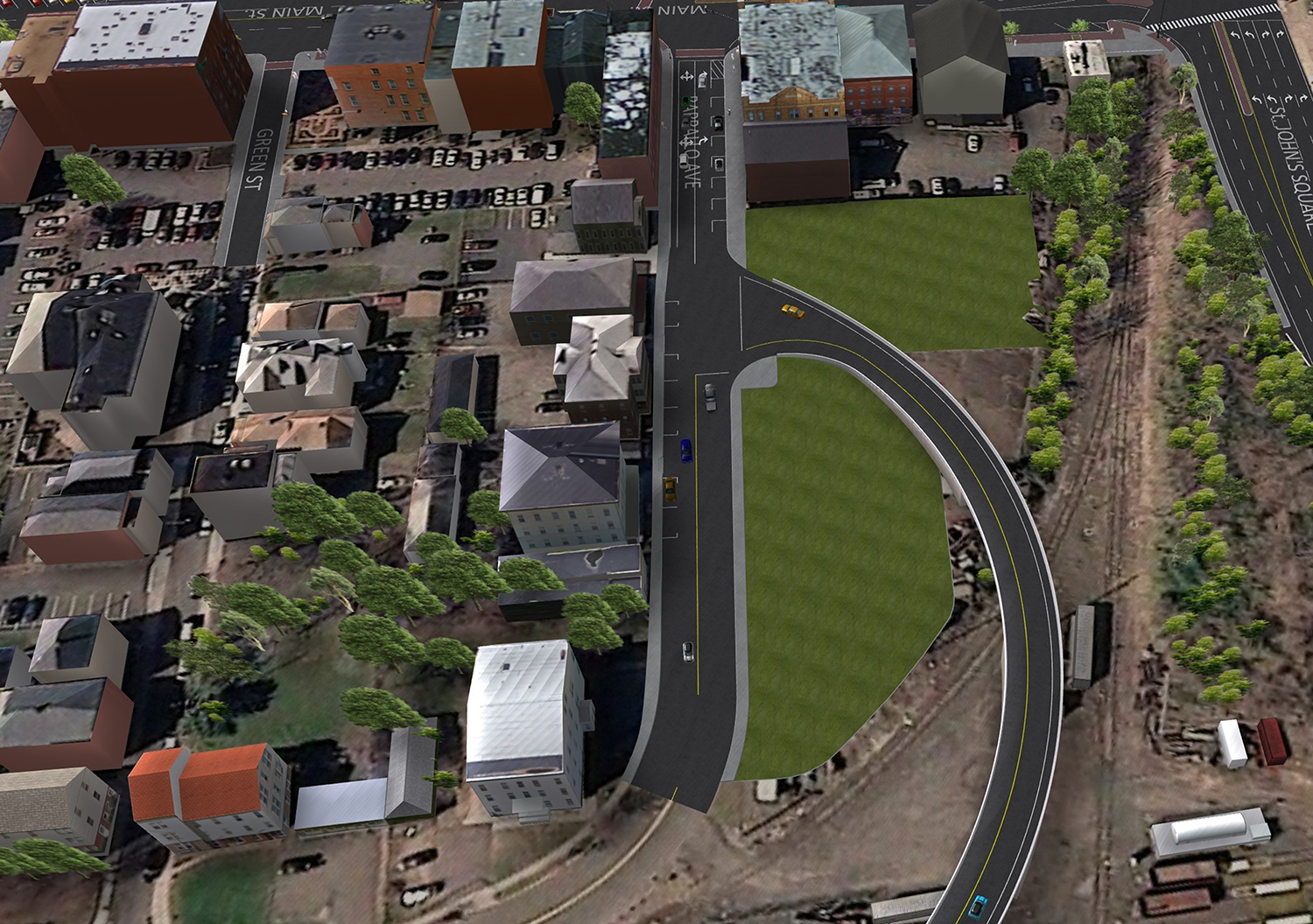 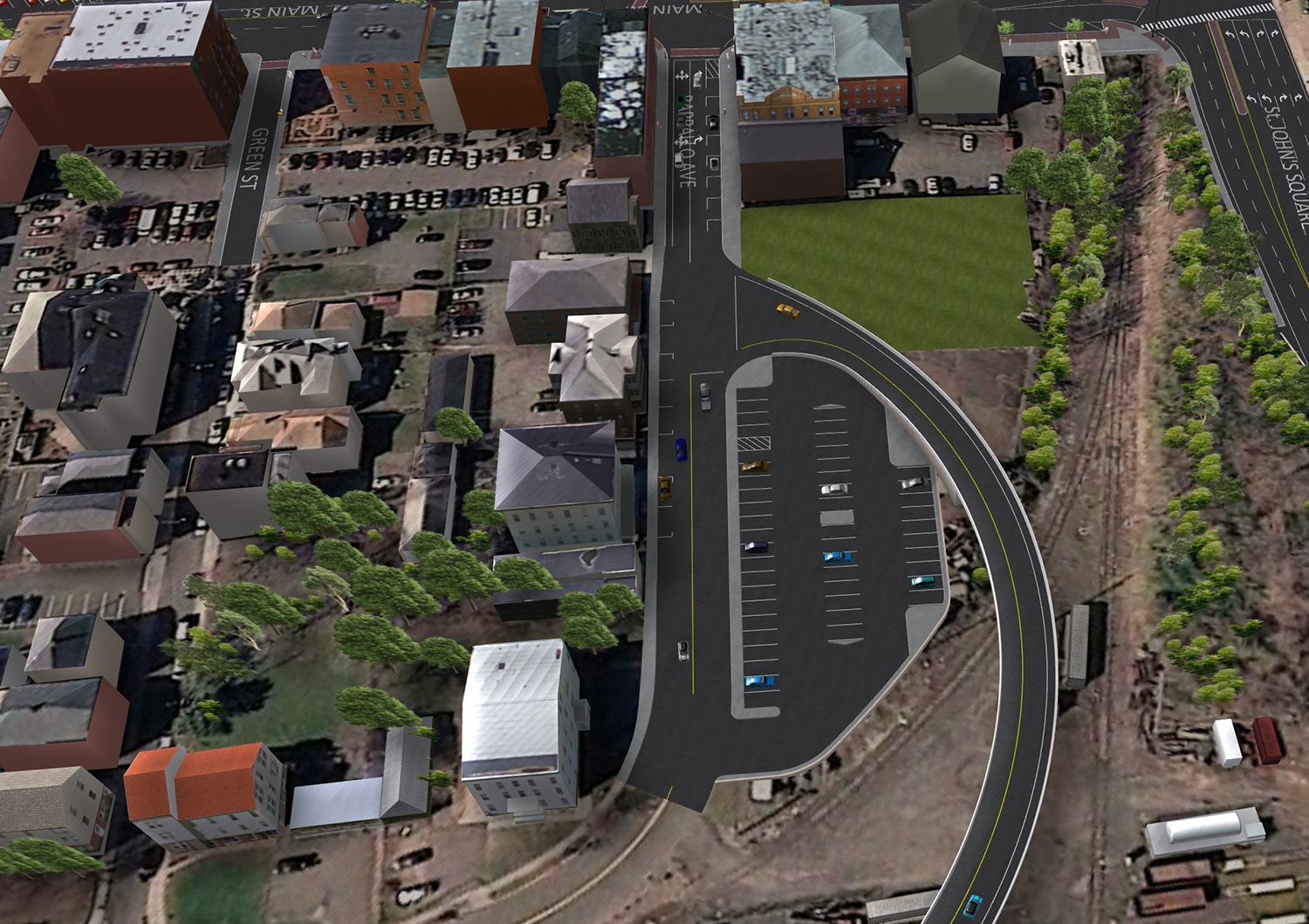 Project 0082-0319 is proposed to enhance pedestrian safety and reduce vehicular congestion by constructing sidewalk bump-outs to shorten pedestrian crossing distances along Main Street. Main Street is a north-south running four lane arterial with on-street parking on both sides of the road. It is the main arterial for downtown Middletown, providing access for pedestrians and vehicles to many restaurants and shops. Due to the on-street parking, current crosswalk distances are between 80 and 96 feet, creating long pedestrian phases which in turn lead to poor vehicular levels of service. This project will construct sidewalk bump-outs to effectively shorten the required crossing distance for pedestrians. A total of 18 bump-outs are proposed that will reduce the pedestrian crossing distances to approximately 55 feet, shortening the pedestrian phase. This will reduce the overall delay experienced at each intersection and improve the level of service. The presence of on street parking reduces the sightlines between a waiting pedestrian and vehicles on Main Street. The bump-outs will relocate the sidewalk ramps even with the end of the parking stalls, improving the visibility for the pedestrian and motorist and increasing safety. 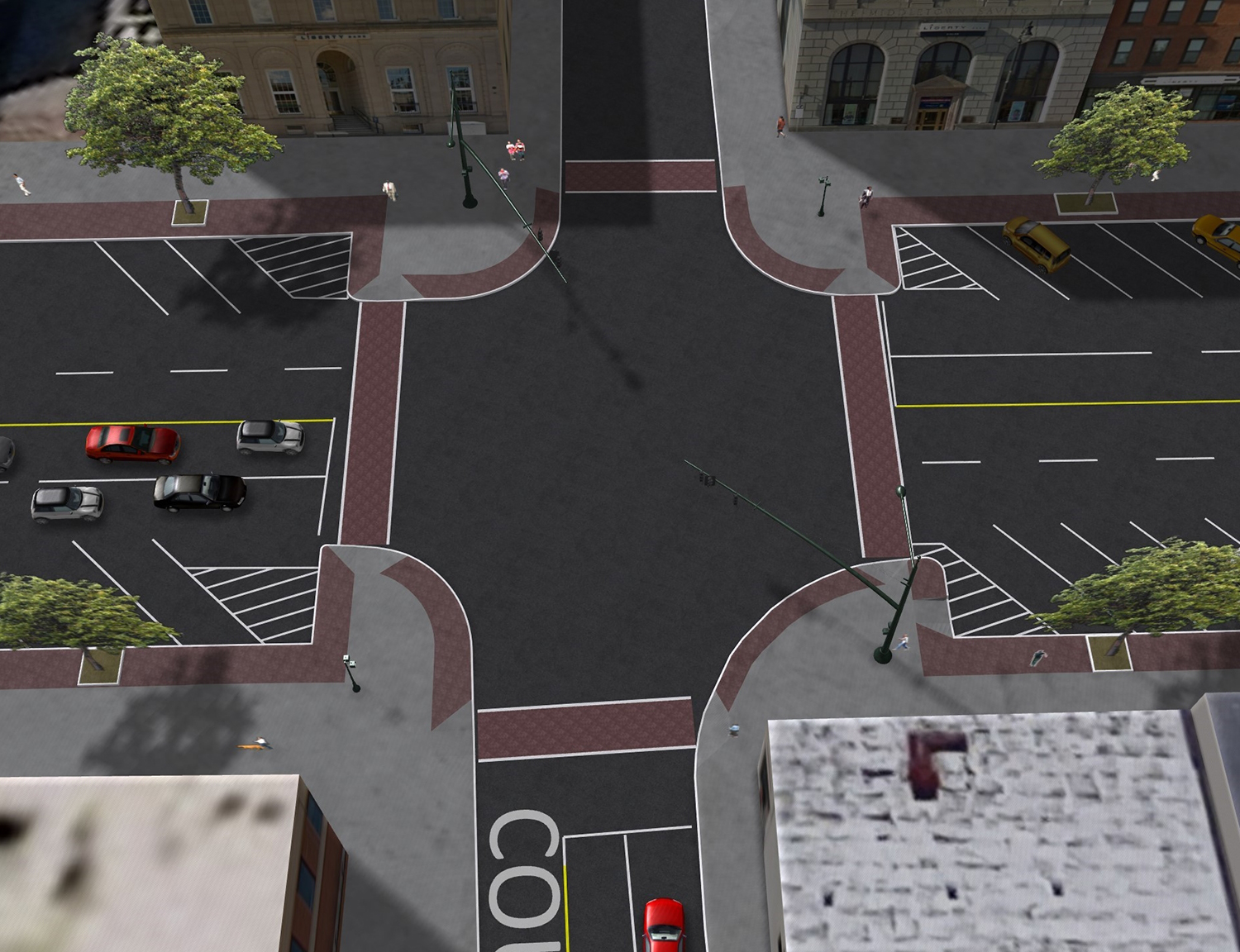 The proposed work includes the addition of two turn lanes on St. John’s Square westbound. Widening will occur on the southbound side in order to incorporate the two new lanes as well as a proposed median island. In addition, geometric improvements will be made to the intersection by way of median islands on Main Street that will serve to normalize the alignment. Rapallo Avenue, which currently consists of one lane in each direction and on-street parking on both sides of the street, will be converted into a one-way street in the westbound direction with limited on-street parking. Grand Street will be widened for the addition of an eastbound turn lane. Widening will also occur at the northwest corner of the intersection of Main Street and Washington Street to accommodate a dedicated right-turn lane. 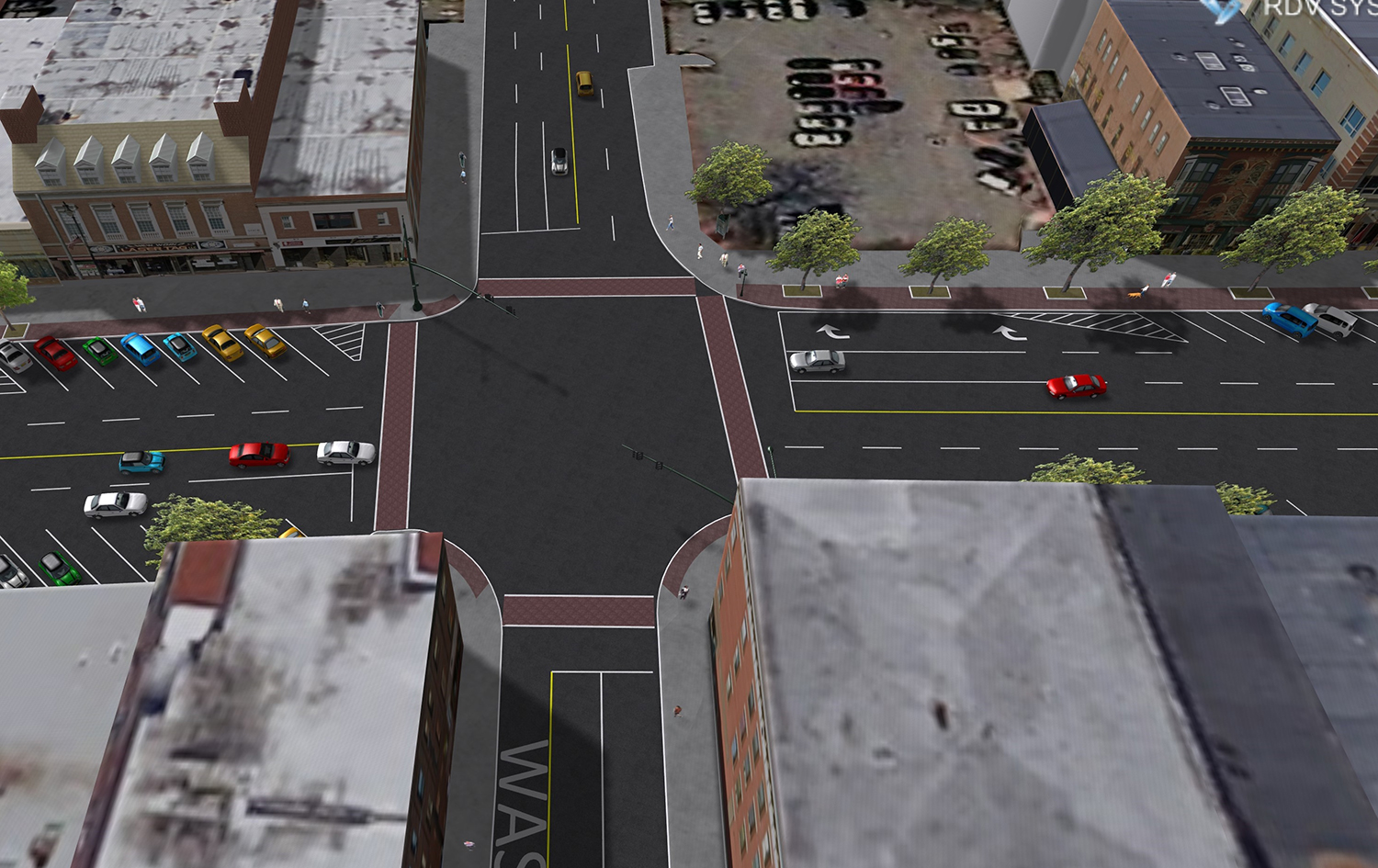 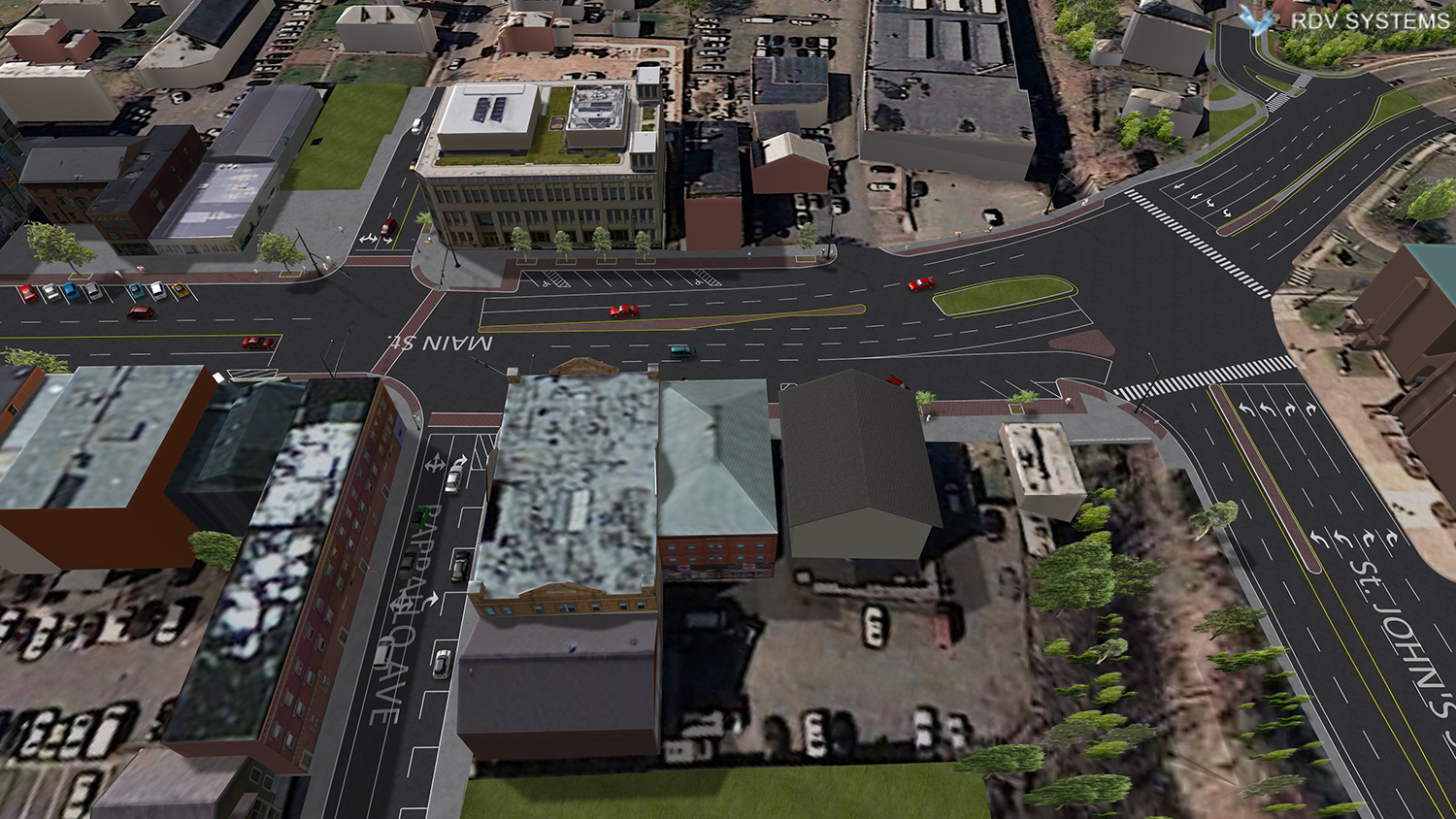 There are right-of-way impacts associated with the proposed improvements. The proposed Route 9 northbound off-ramp will require the acquisition and relocation of three commercial properties. The widening at Main Street and Washington Street as well as the widening on Grand Street will require sliver acquisitions of four properties. Temporary rights may be pursued for the reconstruction of driveways on private property.

The Public Informational Meeting is being held to afford a full opportunity for public participation and to allow open discussion of any views and comments the community may have concerning the proposed projects. This meeting will also serve as a CEPA scoping meeting to gather and analyze information from the public and various state agencies to help determine the proper level of environmental review and documentation necessary for the project.

The meeting facility is ADA accessible. Language assistance may be requested by contacting the Department’s Office of Communications at (860) 594-3062 at least five (5) business days prior to the meeting. Persons having a hearing and/or speech disability may dial 711 for Telecommunications Relay Service (TRS). Language assistance is provided at no cost to the public, and efforts will be made to respond to timely requests for assistance.

Plans of the proposed projects will be on display for public review. Department personnel will be available during the meeting to discuss the project. Detailed information is available at the Department’s Office of Engineering, 2800 Berlin Turnpike, Newington, Connecticut, Monday through Friday between the hours of 8:30 a.m. and 4:00 p.m., excluding holidays. Anyone wishing to discuss the project may contact the Department by e-mail at DOT.Rte9Middletown@ct.gov. Plans are also available for review at the Middletown City Hall.