I-691 Resurfacing, Bridge Rehabilitation and Safety Improvements Project
Project No. 0079-0244

PLANNED CONSTRUCTION:   From August 22 through September 9, during the nighttime hours, between 7 PM and 6 AM, crews will conduct roadway patching along the I-691 Eastbound bridges. Crews will be removing and replacing existing concrete pavement repairs on Stages 1 and 2 and the ramps of I-691 Westbound. Crews will also be surveying patches and bridge deck elevations. Work on electrical light pole bases will continue along I-691 Eastbound and then move to I-691 Westbound during the week of August 29.

The week of August 22 through August 26, during the nighttime hours, crews will be restriping the final roadway alignment of I-691 Eastbound.

From August 22 to September 2, during the nighttime hours, crews will be saw cutting for concrete pavement repairs in Stages 2 and 3 of I-691 Westbound. Crews will also be removing curbing along I-691 Eastbound and cleaning trenches along the bridges of I-691 Eastbound.

The week of September 6 through September 9, during nighttime hours, crews will lay the binder course along Stage of I-691 Eastbound. Crews will also be milling Stage 3 and ramps of I-691 Westbound.

Work will be conducted primarily during nighttime hours, from 7 PM to 6 AM. One or two lanes along I-691 will be closed to traffic while nighttime work is underway. All lanes will be reopened and operational during peak traffic hours.

PROJECT DESCRIPTION: The I-691 Resurfacing, Bridge Rehabilitation and Safety Improvements Project is located along I-691, beginning the Meriden Mall/MidState Medical Center area in Meriden and continuing through the towns of Middlefield, Meriden, Southington and Cheshire.  The overall project limits are approximately from mile 0 to mile 9 on I-691 and Route 66 between log mile 0.0 and 1.95 for signage upgrades. The purpose of the project is to improve travel conditions and increase safety for all users along I-691 from Meriden to Southington. The need for the project includes addressing the poor condition and continued degradation of the roadway, making critical repairs to the bridge infrastructure and completing safety enhancements including improved signage and new guardrails.

The overall project limits are approximately from mile 0 to mile 9 on I-691 and Route 66 between log mile 0.0 and 1.95 for signage upgrades. 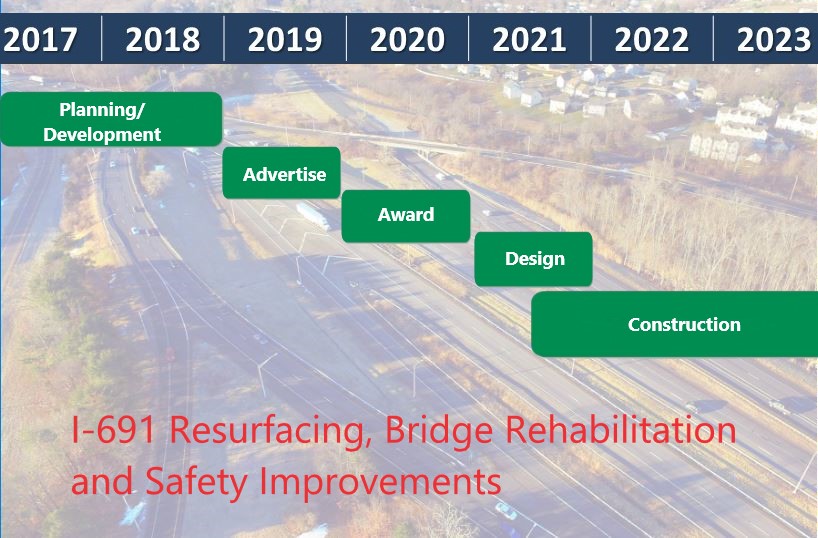