(Wethersfield, CT) – Today, Connecticut Department of Labor (CTDOL) Commissioner Kurt Westby announced that the state’s January unemployment rate was 8.1%, down 0.1% from December 2020. Additionally, the annual benchmarked unemployment numbers show that the unemployment rate during the pandemic was slightly higher than previously estimated.  The federal Bureau of Labor Statistics (BLS) has revised the methodology for estimating state unemployment rates.

Commissioner Westby said, “There’s no doubt that the pandemic was tough on the economy and the workforce; we saw that throughout 2020 with historic unemployment insurance filing levels and large employment declines in many industries. This information also reveals a light on the horizon—the labor market is well-positioned to recover once the vaccine is widely distributed.”

CTDOL Acting Director of Research Patrick Flaherty said, “Even with a high unemployment rate, job posting data shows that at the same time thousands of employers are trying to hire. There is pent-up demand across market sectors—once people are vaccinated and feel safe, they will go out, go back to restaurants and shops, and go back to work. We believe there will be strong economic growth as a result.”

Highlights from the January jobs report:

WETHERSFIELD, March 12, 2021 – Connecticut payroll employment was essentially unchanged in January 2021, dropping just 100 jobs (‑0.01%) after a revised 4,600 (‑0.3%) decrease in December 2020.  This is the third monthly job loss after six consecutive seasonally adjusted monthly jobs gains.  Statewide employment is now 127,300 (-7.5%) positions lower than a year ago at 1,570,700 jobs.  Connecticut has now recovered 166,800 nonfarm jobs (57.0%) of the 292,400 jobs lost in March and April 2020 due to the COVID-19 lockdown.  These nonfarm industry employment estimates are from the business establishment survey conducted by the U.S. Bureau of Labor Statistics (BLS) from the Current Employment Statistics (CES) program.  This data is being released under the newly implemented benchmark.  January data are preliminary.

“Connecticut employment sprinted out of the lockdown in the middle of 2020, but growth stalled as infection rates rose at the end of the year” said Patrick Flaherty, Acting Director of the Office of Research at the Connecticut Department of Labor.  “Private sector employment increased in January led by retail trade, education, and other services.  The unemployment rate is now 3.3% points below the peak reached in the late spring of 2020.”

Three of the ten major industry supersectors had employment gains in January 2021.

Note:  The six major Connecticut LMAs are estimated independently from the statewide data by the BLS and cover more than 90% of the nonfarm employment in the state. Thus, estimates will not fully sum to the statewide total.

Data users must be cautious about trying to compare or reconcile UI claims data with the official unemployment figures derived from the household survey.  For additional insight into the Connecticut labor market during the COVID-19 pandemic please see the analysis linked here: https://www1.ctdol.state.ct.us/lmi/claimsdata.asp  Please note that there are conceptual, coverage, and scope differences between the two data sources.

The nonfarm employment estimate, derived from a survey of businesses, is a measure of jobs in the state; the unemployment rate and labor force estimates are based on a household survey, and measure the work status of people who live in Connecticut.  Overall, as the national and state economies recover, volatility in monthly numbers can be expected. Job and employment estimates are best understood in the context of their movement over several months rather than observed changes in a single month’s value.

The establishment payroll survey data released today have been benchmarked to reflect more comprehensive counts of nonfarm payroll jobs in the state.  The process replaces the original monthly sample estimates with census job counts derived from unemployment insurance (UI) tax records through March 2020 (considered the official benchmark month).  Preliminary second and third quarter UI tax records also replace the sample estimates through September 2020.  The survey data are then re-estimated from October 2020 to December 2020 with more complete random samples from the newly benchmarked September 2020 levels.  Seasonally adjusted data from January 2019 forward are also subject to revision due to the changing concurrent seasonal factors.  Additionally, data for many industry employment series prior to 2020 (some going back to 1990), both seasonally and not seasonally adjusted, may incorporate some revisions and data reconstruction due to changes in scope of industry coverage and improved information.

This year, a significant inclusion of employment scope/coverage by CES in NAICS 62 (Health Care and Social Assistance – mainly home health aides) came from NAICS 814 (domestic household employment) which traditionally was not covered by the Current Employment Statistics (CES) program and nonfarm industry statistics.  This employment was measured at about 10,075 and was added to December 2019 levels and then tracked back at the UI account level to 1990.  This is an industry with high turnover and movement.  Consequently, Connecticut total nonfarm employment levels have been adjusted back to January 1990 reflecting this industry inclusion.  Please update your historical data after this release with the revised data from our website.

Connecticut’s total nonfarm employment level for March 2020 (the official benchmark month) was revised upward by 5,900 from the initially published estimate of 1,677,400 to 1,683,300, or 0.3% seasonally adjusted.  Going forward, the monthly benchmark revision changes to Connecticut’s December 2020 seasonally adjusted nonfarm employment monthly levels were revised down by 20,000, from 1,590,800 to 1,570,800. The COVID-19 Lockdown in March-April (a 292,400 seasonally adjusted job decline) was estimated to be a 291,300 decline at the time but some of the subsequent job recovery from June 2020 on to December 2020 was over-estimated.  The sample seemed to perform adequately under a very volatile situation. 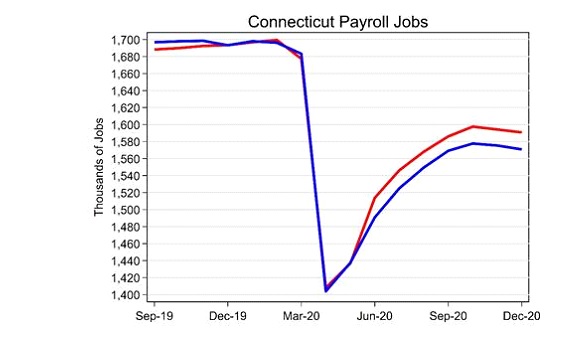 In the spring of 2020, BLS encountered pandemic-related challenges enrolling new businesses to participate in the CES survey, which required adjustments to the timing of quarterly sample rotation. In doing so, there was an unintended data processing issue beginning in July 2020 in which data from some businesses that were scheduled to be dropped from the sample were used in estimates. BLS is taking steps to resolve this issue immediately and will research the impact on CES employment, hours, and earnings.

(See https://www.bls.gov/web/empsit/cestn.htm#section1a for more information on the CES sample and quarterly rotation.)

This year, the whole history of statewide Local Area Unemployment Statistics (LAUS) were revised from 1976 to 2020 using a new improved “Gen5” model-based estimation.  Detailed information describing this change is available at https://www.bls.gov/lau/gen-5-changes-in-2021.htm.  On an annual average basis, the revised Connecticut unemployment rate rose from 3.6% in 2019 to 7.9% in 2020, highest since 2013 when it was 8.0%. 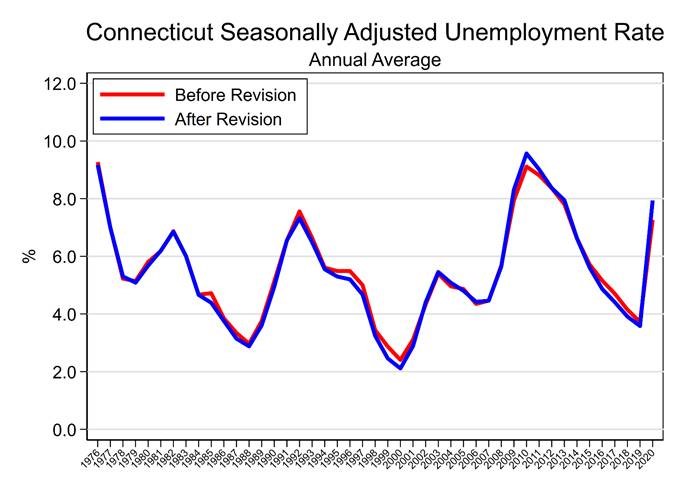 All revised nonfarm employment and unemployment data for Connecticut should be available soon on Connecticut’s Department of Labor’s website under Labor Market Information www.ctworkforce.info.