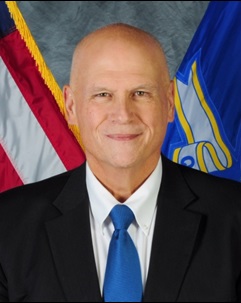 James C. Rovella was nominated by Governor Ned Lamont to be the Commissioner of the Department of Emergency Services and Public Protection (DESPP) on December 28, 2018 and was confirmed by the Connecticut State Senate on February 20, 2019.

Commissioner Rovella graduated from South Catholic High School in Hartford in 1976. He then went on to obtain a Bachelor of Arts degree in Criminal Justice and a Master's Degree in Public Administration from the University of Hartford in 1980 and 1982 respectively.

Prior to his nomination, Commissioner Rovella has had a distinguished career in public safety.

Commissioner Rovella joined the Hartford Police Department in 1981. Upon graduation from the Hartford Police Academy, he was assigned to the Patrol Division where he walked a beat on Barbour Street and Park Street and patrolled Charter Oak Terrace. In 1987, Commissioner Rovella was appointed to detective with the Department's Major Crimes Division where he specialized in homicide and cold case investigations. That career focus led him to become an Inspector with the State of Connecticut Division of Criminal Justice.

In 2012, Commissioner Rovella returned to the Hartford Police Department as the Chief of Police. During his tenure, he worked closely with leaders across Hartford to institute changes to many traditional policing philosophies. The change centered around extensive and meaningful community outreach, prevention and a culture of service. Policy, practices and technology were aligned to this new philosophy. Commissioner Rovella sought partnerships and solutions from the community to steer people successfully away from the criminal justice system rather than into it.

His community outreach was bolstered by unprecedented transparency and communication. He was able to increase community trust through partnering with both grassroots and national organizations in social justice reform. The role of a Community Service Officer was imparted on all officers in the department. Public review of activity, trends and outcomes was instituted monthly.

Commissioner Rovella is the recipient of the highest departmental award, the Chief's Medal of Heroism, and the recipient of numerous letters of commendation and acknowledgement for Exemplary, Meritorious and Distinguished Service. . He is a member of the Connecticut Chiefs of Police Association, the International Association of Police Chiefs (IACP) and Police Executive Research Forum (PERF).

In his service as Commissioner of the Department of Emergency Services and Public Protection, he oversees six agencies:

Commissioner Rovella is also the Homeland Protection and Security Advisor to the Governor.