The Belding Wildlife Management Area is a 282-acre parcel of land in Vernon that was donated by Maxwell Belding to the State of Connecticut. A 1981 Memorandum of Understanding identifies the Department of Energy and Environmental Protection as the steward of the land and instructs the agency to use modern wildlife, forestry, and conservation practices to maintain and improve the land. 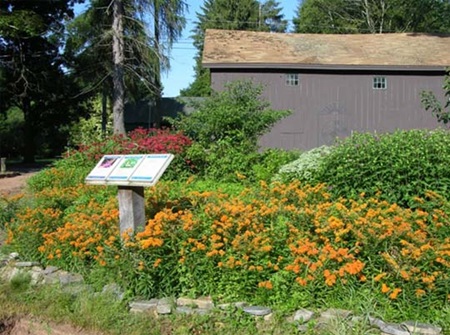 In 2002, the Belding Wildlife Management Area Charitable Support Trust was established to provide the DEEP the resources to conduct professional management, enhancement, and long-term maintenance of the area. A board of trustees was established and remains in force to provide oversight of the trust and to review and approve ongoing activities on the management area. Loss of habitat is the biggest threat facing wildlife. Belding WMA provides a variety of habitat types, including fields, forest, and wetlands. Birds, such as indigo buntings and blue-winged warblers, inhabit the field edges. Black-throated green warblers and red-breasted nuthatches can be heard in the conifer forest. Ground-dwelling ovenbirds and waterthrush sing from the forest floor and along the stream. Woodcock return each spring to perform their courtship display, and wood frogs gather in vernal pools where their chorus can be heard on the first warm day of spring.

Programs offered at Belding WMA include seasonal walks to learn about the plants and animals that can be found at the area. School groups use Belding as an outdoor classroom, and to learn about habitats and the species that depend on them. Belding WMA staff also provides environmental educational programs at area schools and libraries.

For more information about Belding WMA, including programs or projects, please send an E-mail to deep.belding@ct.gov. For a safe and enjoyable visit, and to help protect the wildlife of Belding WMA, please observe the following rules:

Belding WMA currently has fields and mature forest, but very little young forest. In the past, young forest was created after natural disturbances. Wildfires burned trees. Beavers cut down trees and flooded many more. Hurricanes and tornadoes blew down trees. After these natural disturbances, the forest grew back. As shrubs and tree seedlings began to grow, this created the shrubland and young forest habitat that many of Connecticut’s animals depend on.

Today, Connecticut has become very developed. To protect roads and buildings, wildfires are no longer allowed to burn and cutting and flooding by beavers is curtailed. Most young forest habitat now occurs where timber has been harvested.

The first phase of this habitat project removed mature oaks to allow the oak seedlings in the understory to grow. Once sunlight reaches the seedlings, they will grow to create much needed young forest habitat. Birds such as blue-winged warbler, eastern towhee, hooded warbler, and Baltimore oriole are expected to move in. 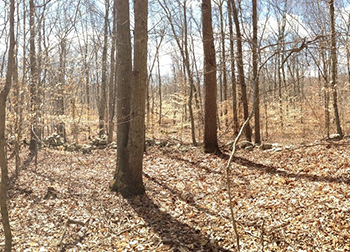 Before a forest cut on land trust property, where there are very few places for wildlife to hide and find food. 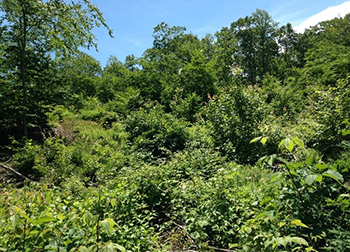 After a forest cut on land trust property, where it is teeming with more wildlife than ever!

For more information on the history of habitats in Connecticut and the importance of native plants, please see the Habitat History and Native Landscaping slide shows below. Use the arrow keys on your keyboard to advance the pages.

A History of Change for Connecticut's Wildlife

(Use the "left" and "right" arrowkeys on your keyboard to navigate each PDF as a slideshow.)

When the settlers first arrived in Connecticut, they encountered mostly mature forests. But, grasslands, shrublands, and young forests could also be found across the landscape. Natural processes created these habitats, which a wide variety of birds and other animals depended on. Today, as these habitats disappear, so do the animals that need them. While development has been the major cause of this decline, another reason is the process known as forest succession. Find out how the Connecticut landscape has changed and how we are bringing back these special habitats.

Native Landscaping: Bring Wildlife to Your Yard with Native Plants 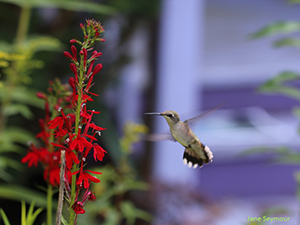 (Use the "left" and "right" arrowkeys on your keyboard to navigate each PDF as a slideshow.) 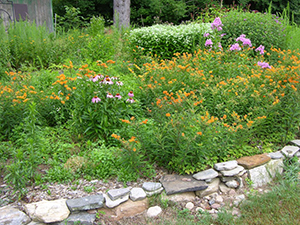 How can you help your backyard wildlife? Plant native plants!
Maintaining a manicured lawn decorated with ornamental plants used to be the norm, but many animals disappeared as we took away their food sources and shelter. But, we can bring them back! Planting native plants provides food for the most important component of the food web - insects! An array of plant-eating insects, like moth and butterfly caterpillars, are a major food source for backyard birds. Even those that feed from bird feeders depend on these insects to survive. Learn more about landscaping and wildlife with this Native Landscaping slideshow, which also provides a list of native plants.

Species of the Week 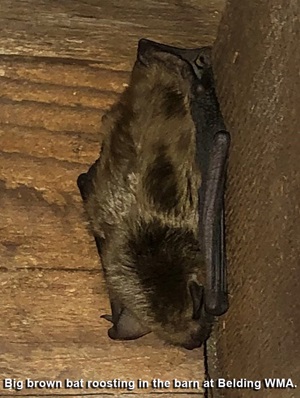 Because they fly at night, bats were once thought to be spooky, scary creatures. As it turns out, bats are extremely beneficial to humans, feeding heavily on crop pests and mosquitos. Some bats are capable of eating up to 1,200 mosquitos and other night-flying insects per hour!

Bats are not blind, but they use echolocation to find their way around at night. When a bat detects an insect, it sends out a series of very high-pitched calls. The sounds that bounce back tell the bat exactly where the insect is, and it then swoops in for the catch.

Bats do not get caught in your hair. If you see them swooping near you, it is likely because they are catching the mosquitoes that want to bite you.

Of the nine species of bats that are native to Connecticut, the big brown bat is the only one that is not listed as endangered, threatened, or special concern. Bats that hibernate for the winter have been devastated by white-nosed syndrome, a disease that has killed millions of bats across North America. The fungus that causes this disease thrives in the cool, moist conditions of the caves where these bats spend their winters.

Not all bats head to the bat cave in winter. Some migrate south, but even these bats have been impacted by loss of habitat and use of insecticides.

Big brown bats can still be seen flying around in the evening, but they will soon settle in to their winter hibernacula. To learn more about the bats of Connecticut, visit CT DEEP’s Bats webpage.

DEEP is responsible for maintaining a diversity of fish and wildlife habitats at Belding WMA. Several projects are currently underway at the area to benefit special habitats or unique species. For example, American chestnut and pitch pine are found on the property and projects have been implemented to help preserve these rare trees. Active management to create, maintain, and expand grasslands and shrublands, both disappearing habitats, is ongoing. Invasive plants are in the process of being removed and riparian habitats are being restored.

How to Get There 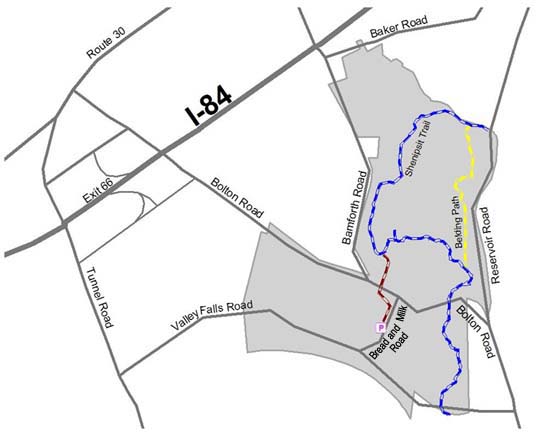 Parking for Belding Wildlife Management Area is located at Bread and Milk Road in Vernon, CT.

A project to restore native pitch pines was initiated in 2008. Pitch pine woodland, a globally rare forest type, is found only in the northeastern United States. Pitch pines depend on fire to expose the soil and release the seeds. Due to fire suppression, pitch pine communities have become increasingly rare.

As the seedlings become established, the young stand of pitch pine will provide important cover for species that depend on this type of early successional habitat. Wildlife species associated with this type of disturbance-dependent habitat include whip-poor-will, prairie warbler, and brown thrasher, a species of special concern in Connecticut.

The DEEP, in partnership with the Connecticut Agricultural Experiment Station (CAES), introduced blight-resistant American chestnut trees to the Belding Wildlife Management Area (WMA) in Vernon this past May. The American chestnut was once a dominant tree of the eastern forests. It was an extremely valuable source of lumber as its wood is highly resistant to rot. In addition, chestnuts produced edible nuts that were an important food source for wildlife. Unfortunately, a non-native, imported fungus, discovered in New York City in 1904, spread quickly and decimated American chestnuts throughout their range. The blight cannot exist in the soil, so even though it kills the trees, it does not kill the roots. Many of these persisting roots continue to grow new sprouts, but the sprouts become infected by the blight and die before reaching maturity.

Dr. Sandy Anagnostakis of the CAES has been breeding blight-resistant American chestnuts as part of an effort to save this tree from extinction. The DEEP planted 200 of these seedlings on a 2.5-acre site within Belding WMA where native chestnut sprouts are abundant. The abundance of native chestnut sprouts on the site is a critical factor in the reestablishment of this valuable species as a key component of Connecticut’s forested landscape. The native sprouts will be inoculated against the blight until they reach maturity and can cross-pollinate with the blight-resistant seedlings. The offspring of these crosses will result in trees that are genetically similar to the trees that were native to the site, but will also carry the genes that resist the blight.

Because American chestnut seedlings require full sunlight, the overstory trees on the restoration site were cleared by a forestry contractor. As the planted chestnut trees grow, the oaks, maples, and birch will grow up with them, resulting in a more diverse forest.

The Wildlife Division initiated a project in 2008 at the Belding Wildlife Management Area to remove invasive shrubs and increase grassland habitat in the fields along Valley Falls Road. Two hedgerows of trees and invasive shrubs that had grown up between the fields were removed to create one larger field. Larger grasslands attract a wider diversity of wildlife.

Early successional habitats (grasslands, shrublands, and young forests) have become rare due to the elimination of disturbances, such as fire and beaver flooding, that historically created or maintained these types of habitats. Livestock grazing is another type of disturbance that maintains grassland habitat, but pastures also have been disappearing from the Connecticut landscape. As these early successional habitats disappear, so do the species that depend on them.

Grasslands are home to a variety of native wildlife. Birds such as bobolink, eastern meadowlark, red-winged blackbird, and field sparrow nest on the ground in grasslands. Twelve species of grassland-dependent birds are on Connecticut’s List of Endangered, Threatened, and Special Concern Species. The most endangered of these species are those that require large areas. The state-endangered grasshopper sparrow prefers sites of at least 100 acres. Upland sandpipers require grasslands of 150 acres or more.

Hayfields attract grassland ground nesters, but early mowing destroys the nests before the chicks fledge. The DEEP mows areas after the nesting season to maintain grassland habitat. Without mowing or other type of disturbance, these fields would eventually revert to forest. Lawns, which are mowed regularly throughout the season, are not considered grasslands and provide little value for wildlife.