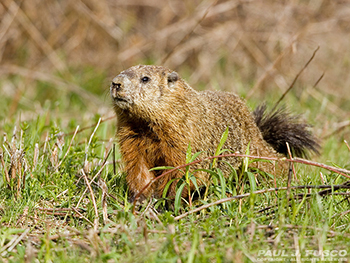 Management of Problems: Damage and problems caused by woodchucks can usually be classified into three categories:

An effective method of controlling woodchucks, and other wildlife, in a garden situation is to erect a fence. A sturdy fence at least 3 feet high will keep most medium-sized animals out. However, woodchucks may try to burrow under the fence. It is recommended that the fence extend underground another 1.5 to 2 feet. Woodchucks have been known to climb over fences, in which case a 1-foot extension that is bent outward at a 90-degree angle should be added to the top of the fence, or the fence be "loosely" constructed to bend outward when an animal attempts to climb up. Placement of an electric hot shot wire 4 to 6 inches above ground and/or at the top of the fence will prevent woodchucks from climbing up and over the fence.

Woodchucks can be excluded from burrowing under sheds and porches by placing galvanized wire mesh along the openings and burying it at least 1.5 to 2 feet underground.

Commercial taste or odor repellents may provide some level of plant protection from feeding damages and also reduce scent marking on trees, decks, or siding. Some of the active ingredients in these repellents include capsaicin and predator urine. Products designed to frighten wildlife away from gardens or small backyards are available, such as ones that use a motion-activated noise alarm or spray water. A radio playing constantly for a few days also may cause a woodchuck to leave its burrow under a shed or deck.

The use of cage trapping is the most effective method of controlling woodchucks that are causing property damage or posing a serious problem. A properly-sized, single door trap (32"x10"x12") or double door trap (36"x10"x12"), set near the burrow with barricades on either side so as to funnel the woodchuck into the unbaited trap, works well. Baiting cage traps with apples, melon, or fresh greens, also set near burrows or along trails, is also effective. Woodchucks can be wary of entering traps. Using woodchuck “scented” dirt taken from the burrow mound to “prime” the trap also may be helpful. It is recommended that removal efforts be delayed until all woodchucks (adults and young) can be removed.

When trapping any wildlife, it is important to adhere to state trapping laws. Woodchucks are susceptible to heat shock, requiring that traps be checked several times a day in summer or placed in the shade or under cover to prevent death. Traps set for woodchucks should be closed at night to prevent catching non-target skunks and raccoons, and then reset at dawn. Once trapped, woodchucks can either be humanely euthanized or released on-site after excluding them from under sheds and porches with galvanized wire mesh. Animals should not be released on state lands (wildlife management areas, parks, forests, etc.) nor on private property unless the landowner grants permission. Persons needing assistance in controlling problem woodchucks can hire a licensed Nuisance Wildlife Control Operator (NWCO) to remove problem small animals and perform exclusion work.

Woodchucks may be controlled in agricultural settings through hunting. All hunting of woodchucks must be done in accordance with state hunting laws and by knowledgeable persons following all state firearms discharge laws. Woodchucks can be hunted most of the year with no daily or seasonal limits. Check the current Connecticut Hunting and Trapping Guide for season dates and requirements.