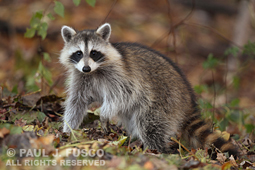 Management of Problem Raccoons: Because of their ability to coexist with humans, raccoons can become a nuisance when they damage gardens, raid garbage cans, or inhabit human structures. They can be especially destructive on farms, where they feed heavily on crops and sometimes kill poultry by raiding chicken coops. Many raccoon problems can be controlled using preventive measures. For example, to deter raccoons from raiding garbage cans, several modifications can be made. Snaps can be attached to the lid and the handle can be secured to a stake driven into the ground to prevent opening and tip-over. Placing cans in wooden bins or in the garage may also eliminate raccoon raiding problems. Some people have had success with placing ammonia directly in the can to repel raccoons.

Pet or livestock food should not be left outside where it is available to raccoons. Bird feeders should be placed away from trees or other structures that can be climbed by raccoons. Predator guards can be purchased or made and installed on the feeder poles to prevent climbing.

Raccoons can easily access roofs by climbing trees, downspouts, vines, or a trellis located near the house. Therefore, to prevent raccoons from entering houses, roofs and chimneys should be well-maintained. Repair any holes near the eaves of the roof and securely place a chimney cap over the chimney. Limiting the access to the roof by trimming trees and shrubs may also be helpful.

Raccoons that have already gained access into attics, flues, or storage buildings are often females seeking safe den sites to whelp and raise their young during their lengthy breeding season that runs from late March-May (whelping) into June-July (weaning and pup rearing). Some denning females with young may be able to be tolerated until the young are old enough to leave the den at around 8 weeks of age. When raccoons cannot be tolerated, evicting raccoons by harassment or use of repellents, such as vinegar or ammonia, combined with light and noise from a portable radio, can be effective. After confirming that the raccoons have departed, cap the chimney or repair openings to prevent recurring problems.

Cage trapping of raccoons occupying buildings, damaging gardens and fruit trees, or causing a disease or safety threat may be successfully done by homeowners, BUT it requires considerable knowledge of state trapping laws and legal options for handling trapped raccoons. Connecticut trapping laws require all persons setting traps to check those traps once per day and tag all traps with their name. Properly-set, raccoon-sized cage traps (10” x 12” x 32”) must be set as close to an opening or damage site as possible. The most effective baits include fishy or fruity smelling items, sunflower seeds, and marshmallows. Trapped raccoons, including females with young, may be released on-site, following capping of chimneys and closing openings. The young should be carefully removed from the nest following the female's capture, making sure that you use bite proof gloves or a capture pole. Place the young in a warm, secure cardboard box near the den opening. Females released on-site will generally return that night for her young.

Relocation of trapped raccoons IS NOT ALLOWED: Raccoons that cannot be released on-site are prohibited from relocation due to their risk for rabies and, most importantly, because there is a state law prohibiting relocation. Relocated wildlife generally have low survivability; they wander extensively; and they have the potential to cause harm to other wildlife and be a nuisance for people near the release site. Raccoons that cannot be released on-site must be humanely killed by either shooting, CO2 euthanasia, or lethal injection by a licensed veterinarian. Any person planning to dispatch raccoons by shooting as a method of euthanasia should be knowledgeable of all state and municipal firearms laws and trained in the safe use and handling of firearms. For professional assistance in controlling raccoons, Connecticut licenses Nuisance Wildlife Control Operators (NWCOs) who can evict, trap, and release on-site or trap and euthanize raccoons, as well as complete repairs to prevent recurring conflicts.

Anyone working in attics, flues, or any den site where raccoon feces is present should use a protective respirator with HEPA filters, wear gloves, and follow safety practices to avoid accidental ingestion or inhalation of raccoon roundworm spores found in most feces. Clean-up of raccoon feces presents a safety concern and should be done using methods that prevent creating dust or contaminating living areas and following Centers for Disease Control and Prevention guidelines.

An electric fence may help keep raccoons out of gardens. The wires must be spaced close together and close to the ground to be effective.

On farms where more effective methods are needed to control a large number of animals, hunters and trappers can harvest problem raccoons during the regulated hunting and trapping seasons. When raccoons are found to be causing substantial crop damage, DEEP may issue a raccoon damage control permit that allows hunting with coon dogs at night.

Raccoon Rabies: Since "raccoon rabies" reached Connecticut in March 1991, thousands of raccoons have become infected. Other species, including dogs, cats, skunks, foxes, woodchucks, and livestock, have also been infected. The following symptoms may indicate the presence of rabies, distemper or other diseases in raccoons or other mammals: unprovoked aggression, impaired movement, paralysis or lack of coordination, unusually friendly behavior, and disorientation. Just because a nocturnal animal, like the raccoon, is active during daylight hours doesn’t necessarily mean that it is sick. Raccoons often adjust their feeding schedules, especially in the spring when rearing their young. Contact with any wild or stray animal should be avoided, especially if it is behaving abnormally. Report sick or strange-acting animals to your local police, animal control officer, or the DEEP. For more information on rabies, contact your local health department.