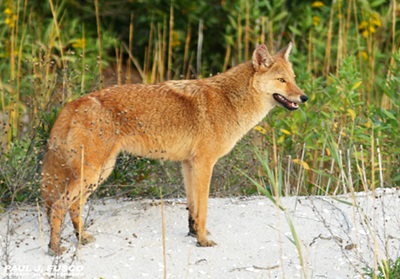 Eastern coyotes were first documented in Connecticut in the 1950s. Since then, they have expanded their range and are now common throughout the state. Coyotes are opportunistic and use a variety of habitats, including developed areas like wooded suburbs, parks, beach fronts, and office parks. Their ability to survive and take advantage of food sources found in and around these “man-made” habitats has resulted in an increase in coyote sightings and related conflicts. A coyote’s diet consists predominantly of mice, woodchucks, squirrels, rabbits, turkeys, deer, some fruits, carrion, and when available, garbage. Coyotes will also prey on small livestock and poultry, and reports of coyotes attacking and sometimes killing pets have continued over the last decade. Unsupervised pets, particularly outdoor cats and dogs, can be vulnerable to coyote attacks. Unfortunately, many pet owners remain unaware or become complacent of the potential presence of coyotes and the threat they pose, only to learn the hard way after letting their pet outside at night or in the early morning, resulting in an attack causing serious injuries or death.

Residents who report coyote conflicts often contact their town Animal Control Division to request assistance and frequently are told the town cannot assist and to contact the DEEP Wildlife Division. Those who contact the Division about coyote conflicts are informed that DEEP does not remove coyotes except in emergencies, but the department documents reported coyote conflicts and provides control information, as well as referrals to licensed Nuisance Wildlife Control Operators (NWCOs) for possible on-site assistance. The Wildlife Division may issue a special permit to a NWCO working for the landowner or municipality to trap and euthanize coyotes responsible for serious damages or public health and safety threats. The Division routinely works with town officials, sharing coyote complaint information and control recommendations. Town Animal Control Officers play an important role in educating residents about threats posed by coyotes, as well as providing information on rabies and pet vaccination status to ensure public safety.

As coyotes have become more common and occasionally prey on or attack pets, public concerns about coyotes attacking people, especially children, have increased. Although some coyotes may exhibit bold behavior near people, the risk of a coyote attacking a person is low. This risk can increase if coyotes are intentionally fed and then learn to associate people with food, or if a person is walking with a dog, especially one that is not leashed, near a coyote den or territory during the denning and pup rearing seasons. Coyotes mate in late January into February, with den preparation and selection during March and actual denning and whelping of 5 to 7 pups in April. Coyotes are known to become more aggressive around these core areas, which they vigorously defend against resident dogs while also exhibiting increasingly bold behavior around people. Territorial coyotes may aggressively approach and threaten or attack dogs of all sizes, not just small dogs weighing less than 25 lbs. These denning coyotes are suspected to be the ones reported stalking dog walkers and, in rare cases, attacking leashed dogs or biting people trying to protect their dogs.

Follow the tips below to increase the safety of pets and livestock, enhance human safety, and learn how to coexist with coyotes:

Tips on Preventing Conflicts with Coyotes

A DEEP Special Trapping Permit may be issued to a qualified NWCO, hired by the landowner or municipality, to target problem foxes or coyotes responsible for damages or real public health or safety threats. Affected landowners or municipalities must fill out and submit to the Wildlife Division an Application to Trap Foxes or Coyotes Causing Severe Damage or Public Safety Threat (Word Form; PDF).

Learn more about the coyote from our Coyote Fact Sheet .