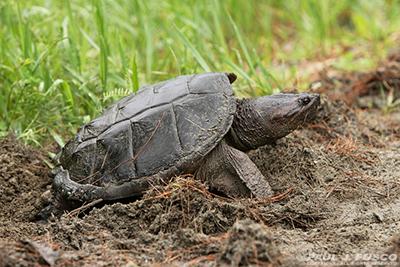 Snapping turtles are widespread in Connecticut. Their ability to adapt to human disturbance and the state's changing landscape has made them successful.

Snapping turtles range across the eastern United States to the Rocky Mountains, from southern Canada to the Gulf of Mexico, and into Central America. Connecticut’s largest freshwater turtle is easily recognized by its dark carapace (upper shell) with a deeply serrated back edge and small plastron (bottom shell) that does not completely cover all of the animal's flesh. Snapping turtles have a long tail, often measuring as long or longer than the carapace, that is covered with bony plates. They also have a large, muscular head, long neck which can be withdrawn into the shell, and a sharp, hooked upper jaw with a rough edge for tearing food. Snapping turtles reach adulthood between 8 and 10 years old and can live for decades beyond that. The carapace measures 8-12 inches on an average adult, and fully-grown turtles can weigh between 10 to 35 pounds. Snapping turtles can be found in a wide variety of aquatic habitats, preferring slow-moving water and a soft muddy or sandy bottom. Snapping turtles rarely leave the water except during their breeding season, when females emerge to dig a nest and lay eggs.

Why is this turtle in my yard?

If you happen to see a large, dark-colored turtle with a long tail and grooves on the back edge of its shell, it is most likely a female snapping turtle looking for a place to dig a nest and lay her eggs. Preferred nesting sites include sandy areas like lawns, gardens, and road banks where a female turtle can dig a small hole to protect her eggs. Snapping turtles search for nesting sites between late May and late June. Once the turtle finds a nesting spot, she digs a hole and lays 20 to 40 eggs over the course of a few hours. After covering the eggs, the female returns to the water, leaving the eggs and hatchlings to fend for themselves.

Like other reptiles found in Connecticut, snapping turtles are not dangerous and will only bite in defense. In water, they are shy and will quickly flee from humans. But, if provoked on land, they will snap in defense, and their powerful jaws can produce a painful and damaging bite. If you happen to come across a snapping turtle, keep your distance and keep curious pets away from the turtle. Do not touch the turtle or attempt to pick it up.

There is no water nearby. Should I move the eggs near water?

Do not move the nest; turtle nests cannot be disturbed without DEEP authorization. Female snapping turtles sometimes travel great distances to lay their eggs, sometimes up to a mile from the nearest water source to find the right nest spot. Hatchlings instinctively head towards water after emerging from the nest. The eggs hatch after 80 or 90 days of incubation, usually in August, September, or October.

What should I do after a snapping turtle lays her eggs?

The best action is to leave the eggs alone. Keep pets away from the area so that they do not attempt to dig up the nest or eat the eggs. Avoid applying pesticides, fertilizers, or other lawn chemicals near the area as they could harm the eggs. Predators, such as raccoons, skunks, foxes, and snakes often dig up these turtle nests. If you cannot scare away the predator before it is too late, do not worry; this is part of the natural food chain. A tiny percentage of eggs will actually survive to adulthood.

Special regulations for snapping turtles were adopted in 2013, and updated in 2016 to regulate capture and nest disturbances and in 2018 to prohibit the commercial trade of snapping turtles.