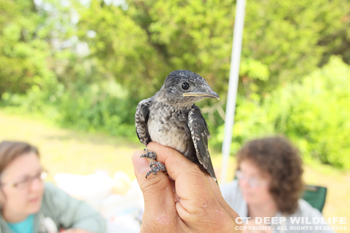 In summer 2011, the DEEP Wildlife Division initiated a study to assess the dispersal patterns of sub-adult purple martins in Connecticut. Each year, juvenile purple martins from several colonies across the state are fitted with identifying leg bands. Each colony is assigned a different band color to determine the natal colony of birds viewed in the future. Understanding how these birds move across the state and colonize new sites will aid in the recovery of this state species of special concern. However, for the study to be successful, these banded birds need to be seen again. The success (or failure) of the study depends on the number of sightings reported to the Wildlife Division.

How You Can Help! 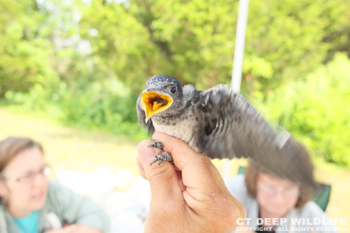 You can help by keeping an eye out for banded birds starting in spring. Purple martins typically begin to return to Connecticut from their wintering grounds during the first few weeks in April and into May.

If you see a color-banded purple martin, please report the sighting to the DEEP Wildlife Division at deep.wildlife@ct.gov or 860-424-3011. Be sure to provide the following information:

Have Purple Martins? Here's What You Can Do

The best place to start is with the Purple Martin Conservation Association (PMCA). Here you can find information on Project MartinWatch (PMW), a continent-wide citizen science project designed to help landlords better manage their colony as well as help the PMCA track the reproductive biology of purple martins. Some martin colony managers already participate in this project, but those who do not should give serious consideration to joining. View the complete project description on the PMCA website.

You will be provided with data forms and other materials, including step-by-step instructions. Nest checks should occur at least every 5-7 days during the entire nesting season until the chicks have fledged. One of the benefits of frequent checks is that potential problems, such as nest parasites, can be addressed early. Another benefit is that you will be able to determine the approximate age of the chicks. This information is extremely helpful when it comes time for banding. Perhaps the greatest benefit of collecting information in this fashion and sending it to PMCA is that your data can be combined with data from hundreds of other colonies all across the continent. With that much data, staff from PMCA can begin to answer questions such as how the overall population is changing. Your Data Matter!

Purple Martin Banding: A Day in the Field! 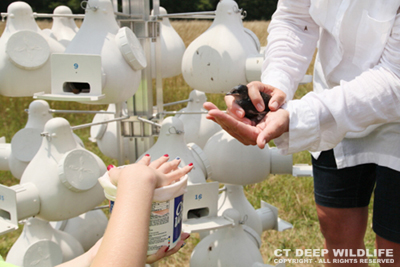 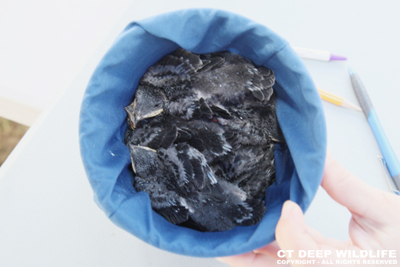 The purple martin chicks from a single nest box are carefully placed into a container and moved to the banding station. Each container has a code to identify which nest box the martins chicks came from so they can be returned to their original nest. 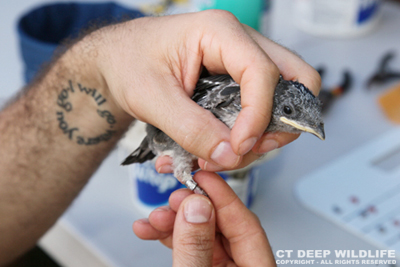 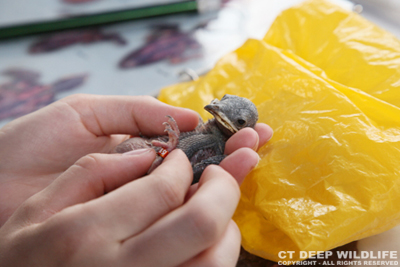 Each purple martin is banded with a federal U.S. Geological Survey metal silver band which has an engraved nine-digit code. On the other leg, the bird is banded with one or two colored bands which identifies the colony where the martin chick was hatched. The single metal orange band in this photo (above) indicates that this martin was banded at a colony at Hammonasset Beach State Park. Colored bands are either metal with the letters CT and a 3-digit number or are plastic with no identifying code. 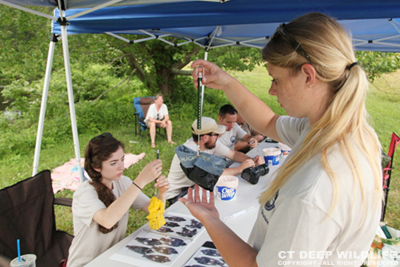 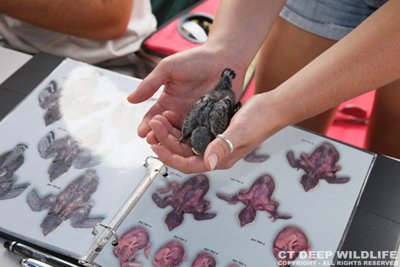 Each martin chick is placed in a small bag and weighed with a specialized scale. Detailed photos are used to determine the age which typically ranges between 6 days (when they are large enough to be banded) and 24 days (before they fledge at around 28 days). 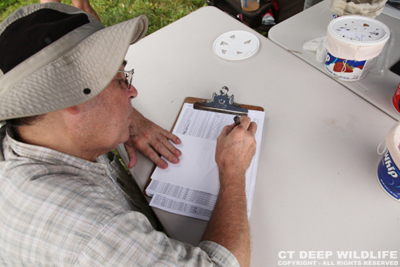 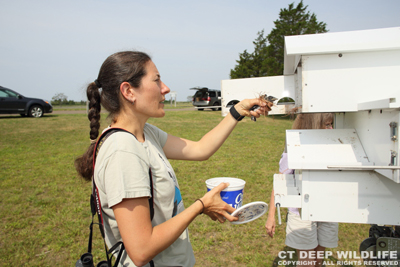 Data are recorded for each purple martin, including the nine-digit silver band number, colored band number, age, and weight. At this age, it is not possible to determine the sex of the martins. After data are entered for each martin from a single nest, the chicks are carefully placed back into their original nest where their parents will return and continue to take care of them.