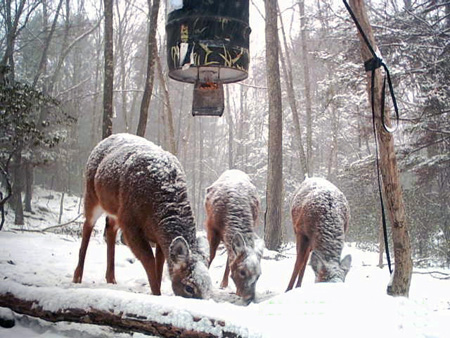 How can deer survive harsh winters?

In fall, deer grow a special winter coat and begin to store fat. The winter coat has hollow guard hairs for insulation with a finer undercoat for warmth, which help deer retain body heat, thus reducing energy demands. Fat reserves put on by deer in fall provide energy and heat over the winter. In addition, deer decrease their metabolic rate during winter, reducing food requirements to about half of their summer requirements. All of these factors contribute to substantially decreased winter energy demands, which can be met with limited natural browse and supplemented with fat reserves. In locations where a severe winter is an annual event, deer may migrate to wintering areas with thicker overhead cover and more available natural winter browse or even move into urban areas where more ornamental browse is available. These adaptations help deer survive severe winters. Even when food is abundant, deer use their fat reserves and lose weight over winter. Deer in relatively good condition can fast for several weeks without harmful effects. Some deer, especially the young and old, may die during harsher winters, as these animals may have insufficient fats stores going into winter or are unable to find food and also compete with larger deer for available food.

What are the negative impacts of winter feeding?

Deer are ruminants, meaning they have a four part stomach with microbes (bacteria) that help digest woody vegetation. Deer acquire specifically adapted microbes over a period of time that digest specific food material. For example, during spring as the green-up of vegetation slowly occurs, deer will slowly begin to use the new food source as the season progresses. When deer eat food that has not been part of their diet, such as large quantities suddenly placed out during severe winters, the specific microbes are not present to help with digestion. Deer will eat any readily available handouts during winter, thus they may fill their stomach with indigestible material. It has been documented over several years that deer have died with stomachs full of food (hay and corn) that was placed out during harsh winters as an emergency food source when limited natural foods were available. Food sources rich in carbohydrates have been known to cause acidosis (grain overload) and enterotoxemia (overeating disease), which can be fatal. In addition, feeding deer during winter can artificially congregate deer into small areas, damaging natural vegetation and habituating deer to humans, thus increasing their use of urban areas and the destruction of ornamental landscape plantings. Although bovine tuberculosis (TB) or chronic wasting disease (CWD) have not been documented in Connecticut’s deer population, winter feeding may artificially congregate deer, increasing the potential for transmission of diseases.

Why shouldn’t I feed deer during winter?
Severe winters cause people to be concerned about the welfare of white-tailed deer and their ability to survive winter. Whether an individual deer can survive winter depends on its physical condition going into winter, the severity of winter, amount and quality of winter food sources, and the animal’s energy expenditures. White-tailed deer have biological adaptations that help them survive through winter. Although winter-related starvation can occur during particularly harsh winters, trying to save deer by supplementally feeding them is not the solution. DEEP discourages providing supplemental food for deer during winter. Feeding deer often makes them more vulnerable to starvation, predation, disease, and vehicle collisions.

What is the difference between winter feeding and baiting?
Baiting deer during the hunting season is different than feeding deer during a harsh winter. Baiting is a technique used by deer hunters where food materials are put out to attract animals to a specific area to position them for better shot placement, potentially increasing hunter success. One of the goals of the DEEP Wildlife Division is to maintain deer population at levels compatible with available habitat and land uses. Baiting is a management option allowed only in Connecticut’s urban deer management zones, where populations need to be reduced. This management option is typically introduced when deer have other food sources available to them, and deer are able to slowly acclimate to limited amounts of bait being placed on the landscape.

The information contained in this document was modified from educational materials produced by Michigan and Wisconsin Departments of Natural Resources.

Deer Crop Damage Permit Program
The Deer Crop Damage Permit Program (Connecticut General Statutes 26-82) provides commercial agriculturalists with a minimum annual gross income of $2,500.00 and an actual or potential loss of this income from their cultivated agricultural crops, the opportunity to reduce damage caused by deer when the firearms deer hunting seasons are closed.