Once common throughout most of New England and eastern New York, the New England cottontail population has declined. Its historic range has decreased by 85%, mainly due to habitat loss. In 2006, the rabbit was considered for listing under the federal Endangered Species Act. 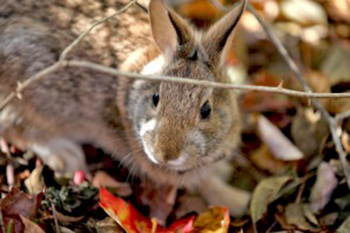 The New England cottontail is the only rabbit that is native to Connecticut.
Photo by Tom Barnes.

New England cottontails do not venture far from the heavy cover. They are typically found in abandoned, filled-in beaver ponds; railroad right-of-ways; power-line corridors; abandoned farms; and young forests. These thick, shrubby habitats, known as “thickets,” provide woody browse throughout winter and protection from bad weather and predators.  Thickets are fairly large and close to other thickets so that young rabbits can successfully find their own territories and mates. Small or poor-quality habitat make New England cottontails more vulnerable to predators because the rabbits must venture farther from protective cover to feed.

Cottontail rabbits are a regulated game species in Connecticut, New York, Massachusetts, and Rhode Island. Research in Connecticut has shown that hunting has little effect on the cottontail population. Most cottontails are killed by predators like hawks, foxes, bobcats, coyotes, and weasels.

What Is Being Done?

A comprehensive conservation strategy for NEC outlines specific objectives for habitat creation and enhancement, land protection, research, monitoring, population management, education and outreach.  Each year regional partners report on progress made toward those objectives in an annual performance report.

In September 2015, the Secretary of the Interior announced that due to these extraordinary efforts, the New England cottontail would not be listed. However, a critical factor in reaching this decision was that conservation efforts continue. 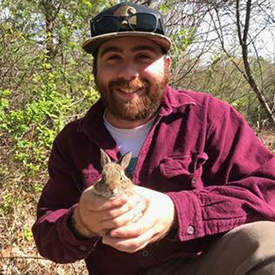 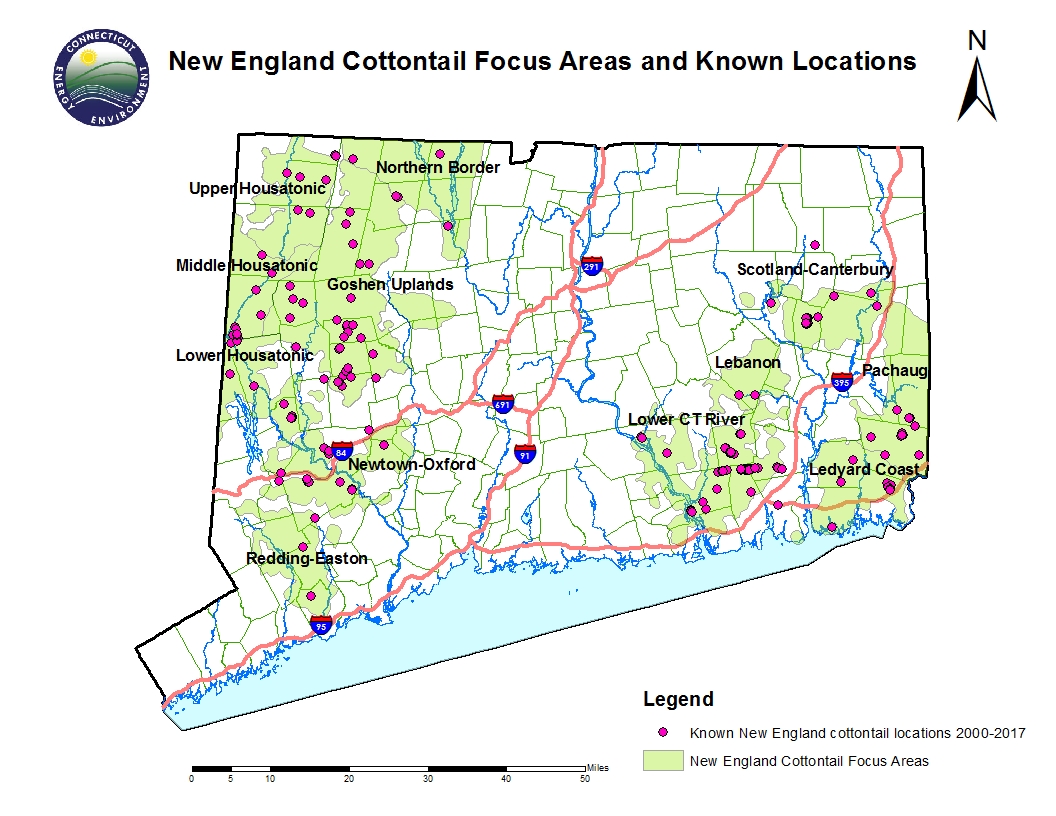 Conservation focus areas help biologists and habitat managers concentrate efforts in areas where they will have the greatest effect. Almost all known New England cottontail populations in Connecticut occur within the focus areas.

Efforts are currently underway to create and maintain habitat for New England cottontails on state lands. Sites were selected based on a screening process and known locations of New England cottontails. Habitat restoration involves conducting timber harvests that result in dense regeneration, as well as plantings and non-native invasive plant control. Habitat enhancement follows New England cottontail Best Management Practices (BMPs). BMPs are updated periodically to incorporate the most recent scientific research, and offer guidelines for when and how to cut trees, clear invasive plants, and encourage new growth in a way that avoids impact to existing New England cottontail habitat and populations. We also follow CT DEEP Forestry Division’s BMPs to maintain water quality during timber harvests. Before conducting habitat management, the DEEP National Diversity Database is consulted to ensure the work will not impact any endangered or threatened plants or wildlife. Areas like steep slopes are avoided and sensitive ecosystems, like vernal pools or trout streams, are buffered to maintain the quality of these critical habitats.

At one of our sites, Roraback Wildlife Management Area in Harwinton, a demonstration trail was created to highlight management techniques and habitat features important to wildlife. (Demonstration Trail Guide).

All of our work on state lands are open to the public. If you’d like to see our habitat restoration at work, visit these properties.

Ninety percent of Connecticut’s lands are privately owned, so the involvement of private landowners is critical. Through the Natural Resources Conservation Service’s Working Lands for Wildlife Program, the Wildlife Division and NRCS are working together to locate interested landowners within conservation focus areas to develop management plans.

Wildlife Division staff has been conducting research, monitoring, assessment, and distribution studies for more than a decade throughout Connecticut. The resulting information has helped us create conservation focus areas, and also choose where to create habitat and focus landowner outreach efforts. Data has been obtained through hunter harvests, roadkill collections, live-trapping, radio-telemetry, and fecal pellet sampling. 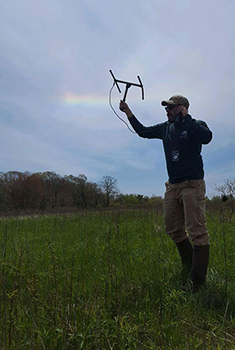 Along with our conservation partners in other states, we are involved in a region-wide effort to monitor changes in New England cottontail distribution over time.

This project provides a source of New England cottontails for reintroduction at existing or restored habitat patches. 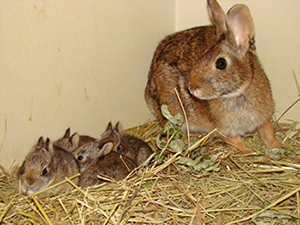 All of our work on state lands are open to the public. If you would like to see our habitat restoration at work, visit these properties: