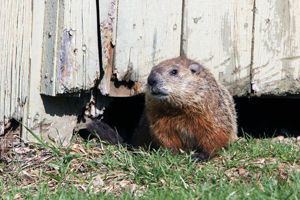 Background: Before the early settlers arrived in this country, most of Connecticut's landscape was forested. Woodchucks, at the time, lived in the scattered forest openings. As land was cleared for farms and houses, this highly adaptable animal also found suitable habitat in associated fields and along forest edges. This new habitat provided a more reliable source of food. The woodchuck is now more abundant in Connecticut than it was during Colonial times.

Range: The woodchuck's range extends from eastern Alaska, through much of Canada, into the eastern United States, and south to northern Georgia.

Description: The woodchuck, also called groundhog, is the largest member of the squirrel family in the state. This stocky, medium-sized mammal is built for digging with short, strong legs and long, curved claws on the front feet. The fur ranges from light to dark brown, with lighter guard hairs giving a frosted appearance. The feet are dark brown to black. The woodchuck has a short, bushy, almost flattened tail, and small, rounded ears that can close over the ear openings to keep out debris while the animal is underground. Males and females are similar in appearance, although males are slightly larger.

Life History: Woodchucks usually breed in their second year, but a small percentage may breed as a yearling. The breeding season starts when they emerge from hibernation in early March. Males emerge from hibernation first in early spring, and begin to search for females. One male will mate with several females. Some males will remain in the same den with the female through the 28- to 32-day gestation period. As birth of the young approaches in April or May, the male will leave the den. One litter is produced annually, usually containing 2 to 6 blind, naked, and helpless young. Young woodchucks are weaned and begin foraging outside the den at 5 to 6 weeks of age, and are ready to seek their own dens shortly after.

Woodchucks emit a shrill whistle when alarmed, followed by a chattering “tchuck, tchuck” sound. They do not get their name from "chucking" wood, but rather from a corruption of the Algonquin word "wuchak."

Excellent diggers, woodchucks dig both simple and complex burrow systems, whose depth and length depend on the type of soil. Most burrows are 25 to 30 feet long and from 2 to 5 feet deep, with at least 2 entrances, although sometimes more. The main entrance is often the most conspicuous, with a large mound of freshly dug dirt nearby. The other less visible entrances are used for escape purposes. A nesting chamber for sleeping and raising young is found at the end of the main tunnel; a separate toilet chamber helps keep the burrow clean. Woodchucks may have 2 burrows: a winter den, in a wooded area, that is deep enough to keep them from freezing, and also a summer den, in open flat or gently rolling areas.

During the warmer months, woodchucks are commonly seen in early morning or late afternoon. They might sleep in the sun during midday hours on rocks or logs near the safety of the burrow entrance. Even while feeding, they usually will not venture more than a few hundred yards away from the burrow entrance. Woodchucks rely on their keen hearing and sense of smell to give them enough time to escape to their dens when danger is near. Their sense of location and navigation is aided by following scent markings made with secretions from a gland located in the mouth. Secretions are left on the surface of saplings, trees, and rocks in their surroundings, especially along trails from feeding areas to burrows.

Woodchucks can be fierce fighters when cornered by potential predators, which include dogs, coyotes, foxes, bears, bobcats, mink, weasels, hawks, and owls.

The woodchuck is one of the few mammals classified as a true hibernator. During 4 to 5 months in winter, the heart, respiration, and metabolism rates of true hibernators are greatly reduced and the animals are nourished from their fat reserves. Toward the end of summer, as cooler weather begins, woodchucks increase their feeding activity to put on a thick layer of fat, which is essential for a long hibernation. By the end of October, most woodchucks have begun their winter sleep, curled up in nests of dried grass and leaves located in burrows below the frost line. The burrow entrance is sealed off with dirt. Woodchucks arise slowly from hibernation during March.

Although woodchucks are primarily terrestrial, they can climb trees up to 15 feet or more to escape an enemy and to even feed on the berries and leaves of some trees, such as red mulberry and hackberry. They also take to the water and are good swimmers.

Abandoned burrows of woodchucks are used for den sites or escape cover by a variety of wildlife, including skunks, raccoons, foxes, rabbits, opossums, weasels, and snakes.

Management of Problems: Damage and problems caused by woodchucks can usually be classified into three categories:

An effective method of controlling woodchucks, and other wildlife, in a garden situation is to erect a fence. A sturdy fence at least 3 feet high will keep most medium-sized animals out. However, woodchucks may try to burrow under the fence. It is recommended that the fence extend underground another 1.5 to 2 feet. Woodchucks have been known to climb over fences, in which case a 1-foot extension that is bent outward at a 90-degree angle should be added to the top of the fence, or the fence be "loosely" constructed to bend outward when an animal attempts to climb up. Placement of an electric hot shot wire 4 to 6 inches above ground and/or at the top of the fence will prevent woodchucks from climbing up and over the fence.

Woodchucks can be excluded from burrowing under sheds and porches by placing galvanized wire mesh along the openings and burying it at least 1.5 to 2 feet underground.

Commercial taste or odor repellents may provide some level of plant protection from feeding damages and also reduce scent marking on trees, decks, or siding. Some of the active ingredients in these repellents include capsaicin and predator urine. Products designed to frighten wildlife away from gardens or small backyards are available, such as ones that use a motion-activated noise alarm or spray water. A radio playing constantly for a few days also may cause a woodchuck to leave its burrow under a shed or deck.

The use of cage trapping is the most effective method of controlling woodchucks that are causing property damage or posing a serious problem. A properly-sized, single door trap (32"x10"x12") or double door trap (36"x10"x12"), set near the burrow with barricades on either side so as to funnel the woodchuck into the unbaited trap, works well. Baiting cage traps with apples, melon, or fresh greens, also set near burrows or along trails, is also effective. Woodchucks can be wary of entering traps. Using woodchuck “scented” dirt taken from the burrow mound to “prime” the trap also may be helpful. It is recommended that removal efforts be delayed until all woodchucks (adults and young) can be removed.

When trapping any wildlife, it is important to adhere to state trapping laws. Woodchucks are susceptible to heat shock, requiring that traps be checked several times a day in summer or placed in the shade or under cover to prevent death. Traps set for woodchucks should be closed at night to prevent catching non-target skunks and raccoons, and then reset at dawn. Once trapped, woodchucks can either be humanely euthanized or released on-site after excluding them from under sheds and porches with galvanized wire mesh. Animals should not be released on state lands (wildlife management areas, parks, forests, etc.) nor on private property unless the landowner grants permission. Persons needing assistance in controlling problem woodchucks can hire a licensed Nuisance Wildlife Control Operator (NWCO) to remove problem small animals and perform exclusion work.

Woodchucks may be controlled in agricultural settings through hunting. All hunting of woodchucks must be done in accordance with state hunting laws and by knowledgeable persons following all state firearms discharge laws. Woodchucks can be hunted most of the year with no daily or seasonal limits. Check the current Connecticut Hunting and Trapping Guide for season dates and requirements.

This publication is partially funded by the Federal Aid in Wildlife Restoration Program. Funds are provided through an excise tax on the sale of sporting firearms, ammunition, and archery equipment. (rev. 6/22)