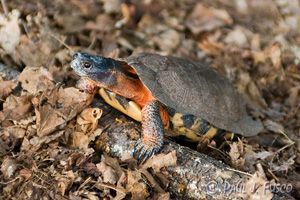 Background: Wood turtles may be found throughout Connecticut, but they have become increasingly rare due to their complex habitat needs. Wood turtles also have become more scarce in Fairfield County due to the fragmentation of suitable habitat by urban development.

Range: Wood turtles can be found across the northeastern United States into parts of Canada. They range from Nova Scotia through New England, south into northern Virginia, and west through the Great Lakes region into Minnesota.

Description: The scientific name of the wood turtle, Glyptemys insculpta, refers to the deeply sculptured or chiseled pattern found on the carapace (top shell). This part of the shell is dark brown or black and may have an array of faint yellow lines radiating from the center of each chiseled, pyramid-like segment due to tannins and minerals accumulating between ridges. These segments of the carapace, as well as those of the plastron (bottom shell), are called scutes. The carapace also is keeled, with a noticeable ridge running from front to back. The plastron is yellow with large dark blotches in the outer corners of each scute. The black or dark brown head and upper limbs are contrasted by brighter pigments ranging from red and orange to a pale yellow on the throat and limb undersides. Orange hues are most typical for New England’s wood turtles. The hind feet are only slightly webbed, and the tail is long and thick at the base. Adults weigh approximately 1.5 to 2.5 pounds and reach a length of 5 to 9 inches.

Habitat and Diet: Wood turtles use aquatic and terrestrial habitats at different times of the year. Their habitats include rivers and large streams, riparian forests (adjacent to rivers), wetlands, hayfields, and other early successional habitats. Terrestrial habitat that is usually within 1,000 feet of a suitable stream or river is most likely used. Preferred stream conditions include moderate flow, sandy or gravelly bottoms, and muddy banks.

Life History: From late spring to early fall, wood turtles can be found roaming their aquatic or terrestrial habitats. However, once temperatures drop in autumn, the turtles retreat to rivers and large streams for hibernation. The winter is spent underwater, often tucked away below undercut riverbanks within exposed tree roots. Dissolved oxygen is extracted from the water, allowing the turtle to remain submerged entirely until the arrival of spring. Once warmer weather sets in, the turtles will become increasingly more active, eventually leaving the water to begin foraging for food and searching for mates. Travel up or down stream is most likely, as turtles seldom stray very far from their riparian habitats.

Females nest in spring to early summer, depositing anywhere from 4 to 12 eggs into a nest dug out of soft soil, typically in sandy deposits along stream banks or other areas of loose soil. The eggs hatch in late summer or fall and the young turtles may either emerge or remain in the nest for winter hibernation. As soon as the young turtles hatch, they are on their own and receive no care from the adults.

Turtle eggs and hatchlings are heavily preyed upon by a wide variety of predators, ranging from raccoons to birds and snakes. High rates of nest predation and hatchling mortality, paired with the lengthy amount of time it takes for wood turtles to reach sexual maturity, present a challenge to maintaining sustainable populations. Wood turtles live upwards of 40 to 60 years, possibly more.

Conservation Concerns: Loss and fragmentation of habitat are the greatest threats to wood turtles. Many remaining populations in Connecticut are low in numbers and isolated from one another by human-dominated landscapes. Turtles forced to venture farther and farther from appropriate habitat to find mates and nesting sites are more likely to be run over by cars, attacked by predators, or collected by people as pets.

Other sources of mortality include entanglements in litter and debris left behind by people, as well as strikes from mowing equipment used to maintain hayfields and other early successional habitats.

The wood turtle is imperiled throughout a large portion of its range and was placed under international trade regulatory protection through the Convention on International Trade in Endangered Species (CITES) in 1992. Wood turtles also have been included on the International Union for Conservation of Nature’s (IUCN) Red List as a vulnerable species since 1996. They are listed as a species of special concern in Connecticut and protected by the Connecticut Endangered Species Act.

How You Can Help

The production of this Endangered and Threatened Species Fact Sheet Series is made possible by donations to the Endangered Species/Wildlife Income Tax Checkoff Fund.
(4/11)