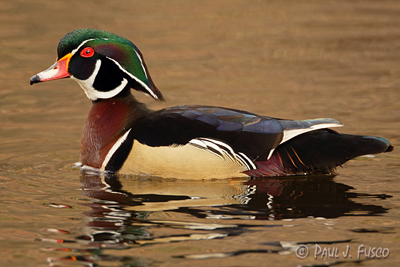 Background:
The wood duck is one of the most beautiful of the North American ducks. In the early 1900s, the species was considered in danger of extinction throughout its range due to market shooting, habitat loss, and hunting seasons that extended into the breeding season. With the implementation of the Migratory Bird Treaty Act in 1918 between the United States and Canada, market shooting was outlawed and judicious hunting season lengths and bag limits were instituted. These changes, together with the construction and placement of nest boxes during the last seven decades, have resulted in a dramatic comeback of wood duck populations.

Wood ducks are distributed throughout Connecticut, with the highest densities located in the northwest and northeast corners of the state.

Range: The wood duck ranges from Nova Scotia and Minnesota south to Florida and Texas. In the west, the species occurs from British Columbia to Washington and south through California. Wood ducks are also found in Cuba. They winter in California, the southeastern and Gulf states, and Cuba.

Description: The wood duck is a medium-sized dabbling duck, about half the size of a mallard. It weighs approximately 1.5 pounds, measures between 16 to 21 inches long, and has a 24 to 28-inch wingspan. The male is slightly larger than the female. Both sexes have a noticeable crest that extends outward from the back of the head. The male's plumage of green, purple, bronze, and white and its bright red eyes make it one of the most impressive of Connecticut's waterfowl. The female is rather drab in comparison, mostly gray and light brown, with a white teardrop-shaped eye ring.

In flight, the wood duck is identified by its rapid wingbeat, light underbelly, and long, rectangular tail. Flight is swift and direct and usually not much higher than the treetops.

Wood ducks are highly vocal and are often heard before they are seen. They have a number of calls. The male's call is a drawn out "ji...ihb" or "jeeb," while the female's flight call is a squealing "oo-eek, oo-eek."

Life History: Wood ducks nest in tree cavities but cannot excavate their own nest holes. Hens will use pre-existing cavities wherever they can be found but will usually select ones located in close proximity to water. However, wood ducks have been known to successfully nest up to one-half mile from the nearest water source. A scarcity of natural cavities may limit a wood duck population. Nesting sites can be provided by erecting specially-constructed nest boxes in suitable habitat. The nest boxes are readily accepted by wood ducks.

Wood ducks form pair bonds on the wintering grounds. The pairs typically begin arriving in Connecticut in early to mid-March. Hens tend to return to the areas from which they were fledged or had previously nested successfully. The hen inspects and chooses the nest site. Wood ducks do not carry nest materials to the nest as most other birds do. They will use whatever materials exist within the chosen cavity to create the nest.

In Connecticut, nesting usually begins in March. The hen lays 1 egg per day until her clutch is complete; the average clutch size is between 10-14 eggs. Once a hen has laid all of her eggs, she begins incubating them. Development of the chicks doesn’t start until incubation. Due to this evolutionary adaptation, all of the eggs hatch at the same time. The incubation period typically lasts 30 days. Broods hatch as early as the first week in May and as late as the fourth week in July.

After hatching, the hen will brood (cover and warm) her hatchlings for a day. Twenty-four to 36 hours after hatching, the young are called from the nest by the female. Small toenails on the webs of the ducklings enable them to climb up the wall of the cavity and out of the hole. The ducklings will then drop to the ground and join the hen, which will lead them to quality brood-rearing habitat. Areas with a mix of submerged vegetation beds, which provide an abundant supply of invertebrates, and stands of dense herbaceous vegetation like bulrushes, cattails, duck potato, water lilies, duckweed, and pickerelweed, which provide excellent cover from predators, constitute good brood habitat. The young are capable of flight at 56 to 60 days after hatching.

Interesting Facts: Wood ducks are among the most productive egg layers of all the duck species. This evolutionary adaptation occurs because wood ducks experience very high duckling mortality rates. If the first nest fails, the female will attempt up to 2 re-nests to raise a brood.

Wood ducks will often lay their eggs in another wood duck nest. This phenomenon is called dump nesting. Nests containing 15 or more eggs are considered dump nests. After the nesting season, sometimes whole eggs or dead chicks are found in dump nests. This is because once the hen and her own brood leave the cavity, they do not return. Dump nesting typically occurs in areas where nest sites are densely crowded and are not visually isolated from each other. Hen wood ducks will observe other hens entering cavities to lay eggs and will then follow suit. Hens that dump eggs typically lay and incubate their own eggs later in the nesting season. Thus, a hen doesn’t "throw all her eggs in one basket" and increases her odds that one or more of her eggs will survive. It is generally thought that dump nesting is favorable for wood ducks and thus has evolved as part of wood duck behavior.

In proportion to their wing length, wood ducks have the broadest wings of any duck. They also have the largest eyes of any of the duck species. These evolutionary adaptations likely evolved to assist the wood duck to fly through the trees and branches characteristic of the habitats they frequent.

Local resident wood ducks congregate in flock sizes of 10 to 50 and sometimes up to 200 in wooded swamps during late summer and early fall.

Migrant wood ducks that originate from Ontario, the Maritimes, New York, and New England states begin to arrive in Connecticut in mid-September, with peak arrival in October. Both resident and migrant wood ducks migrate rapidly out of the state during November. Most are gone by mid-November, although some linger into December during mild weather. Connecticut's breeding population of wood ducks winters south of Maryland along the Atlantic Coastal Plain, with North Carolina, South Carolina, and Georgia being the most important areas.

Conservation and Management: The recovery of the wood duck is an outstanding example of successful wildlife management. The Wildlife Division began monitoring wood duck nest boxes on state and private land starting in 1953. Today, the Division maintains nearly 600 nest boxes annually on state land. This program has been very successful. Box use averages 50% and nest success is 80-90% in nest boxes placed on posts over water in suitable habitat. In comparison, nest success in tree cavities is about 50%. Raccoons may be a significant predator on tree cavity nests, while flooding may cause nest failure in boxes.

Wood ducks require high quality wetland habitat with low human disturbance. Heavy human development pressures in Connecticut have a negative impact on wetland habitat and the wood duck population. Some valuable wetland habitat is currently owned and managed by the DEEP, land trusts, and private conservation organizations. However, wide-scale  habitat protection can only be accomplished with strong enforcement of freshwater wetland regulations, incentives for open space preservation, and an environmentally aware public.

What You Can Do to Help: Build, install, and monitor wood duck nest boxes in appropriate wetland habitat. Nest box plans and installation guidelines are available from the DEEP Wildlife Division at deep.wildlife@ct.gov or call 860-424-3011.