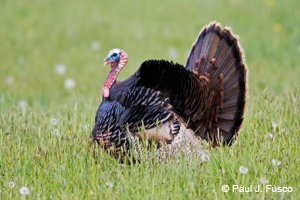 Background: Wild turkeys were abundant in Connecticut when the first settlers arrived. However, a combination of forest clearing and a series of severe winters eliminated the turkey from Connecticut by the early 1800s. From the 1950s through the early 1970s, attempts at wild turkey restoration through artificial propagation were largely unsuccessful. The major breakthrough in restoration efforts occurred when free-roaming wild turkeys were live-captured and translocated using a rocket net. This large, lightweight net is fired by rockets from a remote blind and carried over turkeys that have been attracted to the area by bait.

Between 1975 and 1992, 356 wild turkeys were released at 18 sites throughout the state. These releases and subsequent population expansion have resulted in the successful restoration of wild turkeys to all 169 Connecticut towns. Recent land use practices in Connecticut have also favored the expansion of wild turkey populations as the landscape has become more forested. As a result of restoration efforts and the increase in forest habitat, sportsmen have been able to hunt wild turkeys since 1981, and landowners and others have enjoyed observing them in their natural state.

Range: In the United States, five subspecies of wild turkey inhabit 49 states, not including Alaska. The subspecies which exists in Connecticut, Meleagris gallopavo silvestris, ranges from southern Maine to northern Florida, west to eastern Texas and north to North Dakota.

Description: The eastern wild turkey is a large, majestic bird. Adult males weigh anywhere between 15 and 25 pounds, and measure 48 inches. Adult females are smaller, weighing between 8 and 12 pounds and measuring 36 inches.

Males or “toms” are dark in coloration with iridescent feathers. They have a fleshy, unfeathered head that is brightly-colored in red, white, and blue, especially during the mating season. Toms also have spurs (up to 1.5 inches in length) on their legs, and a hair-like beard (up to 12 inches long) protruding from their breast.

Female turkeys (hens) are lighter in coloration (brown and buff colored). They lack spurs and have a pale blue head. Although uncommon, a small percentage of hens will have a beard.

Habitat and Diet: Wild turkeys inhabit a mixture of mature hardwood forests and open fields. They frequently forage in fields that border forestland.

The diet of wild turkeys include acorns and other mast (hard fruit), fleshy fruits, corn, a variety of seeds, and invertebrates. Young turkeys (poults) feed heavily on insects.

Life History: The breeding season starts in late March and early April when toms begin gobbling and displaying for the hens. Turkeys are considered polygamous breeders, as toms will mate with many hens and hens may breed with more than one tom. Males establish a pecking order of dominance, and the most dominant male may breed with most of the hens in an area.

Hens lay a clutch of 8 to 14 eggs at the rate of about 1 egg per day. The eggs are incubated for 28 days beginning when the final egg is laid. Once hatched, the poults will remain with the hen throughout summer, fall, and winter. In late summer, hens with their broods will join up to form flocks. Flocks of up to 100 birds have been reported in Connecticut, but commonly the flocks number from 10 to 20 birds. On occasion, adult toms will join the flock, but more often will form groups of their own or travel as individuals.

Interesting Facts: Although usually seen on the ground, turkeys do fly. A wild turkey may range over several square miles in one day.

The wild turkey fares better in less-disturbed areas. However, in some areas of dense human populations, where food and cover are plentiful, turkeys have adapted and seem to survive well. Few predators are able to catch an adult wild turkey. The turkey's well-developed instinct for survival and excellent eyesight and hearing help to keep it out of harm’s way. Hens on the nest, as well as poults during their first few weeks of life, are most vulnerable to predation. Free-ranging domestic dogs can severely reduce nesting success in populated areas.

Management: A Connecticut regulation prohibits individuals from releasing any turkey into the wild. Releasing pen-raised turkeys only jeopardizes the survival of the existing wild turkey population. Birds raised in captivity are host to a reservoir of diseases and are of a poorer genetic strain. They also do not possess the instincts to survive in the wild.

The DEEP Wildlife Division recommends NOT feeding wild turkeys, as this encourages the spread of disease and loss of wild instincts.

This publication is partially funded by the Federal Aid in Wildlife Restoration Program. Funds are provided through an excise tax on the sale of sporting firearms, ammunition, and archery equipment. (rev. 11/2016)