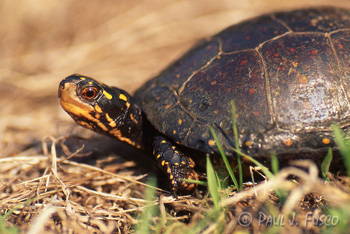 Description: The spotted turtle is characterized by a smooth, bluish-black carapace (top shell) with yellow-orange spots. The carapace is made up of a combination of scales (scutes) and bones, and it includes the ribs and much of the backbone. This turtle is sometimes referred to as the “polka-dot turtle,” as the number of spots can range from a single dot to multiple dots per scute. The plastron (bottom shell) is yellowish-tan with dark markings. The sides of the head and chin are often marked with reddish-orange to yellow blotches, and the forearms may also be bright orange.

Spotted turtles are small, only growing to about 4.5 inches in length and weighing between ½ to ¾ pounds. Males are distinguished by a tan chin, brown eyes, concave plastron, and a longer, thicker tail. Females have a more domed shell, yellow chin, and orange eyes. Hatchling spotted turtles are 1 to 1.5-inches long when born.

Range: The spotted turtle has a somewhat disjunct range in North America. It occupies the eastern portion of the Great Lakes region from Ontario south to Illinois and west to Michigan. It also is found along the eastern seaboard from southern Maine south to Florida. Isolated populations also occur in southern Quebec, southern Ontario, central Illinois, central Georgia, and northcentral Florida.

Habitat and Diet: Spotted turtles are found throughout the Connecticut lowlands, close to slow-moving bodies of water. They use shallow water bodies, including unpolluted bogs, pond edges, ditches, marshes, fens, vernal pools, red maple swamps, and slow-moving streams. Water bodies with a soft, murky bottom and abundant aquatic vegetation are preferred. Spotted turtles will seek out other wetlands if their habitat becomes unsuitable. Upland habitats also are used for nesting, aestivating, and travel corridors between wetlands.

Life History: Spotted turtles emerge from hibernation in early spring, usually in March, and begin looking for mates. After breeding, the females leave the breeding pools in search of nesting areas. They may travel a good distance and, in many instances, are killed when crossing roads. Preferred nesting sites are generally located in open, upland habitats, such as a meadow, field, or the edge of a road. The female digs a nest cavity with her hind legs and feet, and then lays about 3-4 eggs. She covers the eggs with soil, smoothing it over by dragging her body over the ground. The eggs hatch in mid-September through October, but some hatchlings may overwinter in the nest and surface the following spring. Sex of the hatchlings is determined by the temperature and humidity of the nest.

Due to this turtle's small size, predation is high, especially for hatchlings. Mammals, such as raccoons and muskrats, often prey on spotted turtles, as well as some birds and predaceous fish.

Spotted turtles are thought to live 25 to 50 years and reach sexual maturity at 8 to 10 years of age.

Spotted turtles are active only during daylight hours, and spend the night under water on the pond bottom. They are often seen basking on logs or rocks during spring and summer, but may retreat to an aquatic or terrestrial spot (under the leaf litter) when there is intense heat. This summer “hibernation” is known as aestivation.

Conservation Concerns: Spotted turtles are protected by the Connecticut Threatened and Endangered Species Act and may not be collected from the wild. The isolation and decline of spotted turtle populations are attributed to collection for the pet trade industry; the alteration, loss, and fragmentation of habitat; habitat succession; road mortality; and predation. Relatively low reproductive rates, coupled with the above-mentioned threats, make spotted turtles extremely susceptible to population declines. They are sensitive to pollution and toxic substances, and will disappear rapidly from habitats with declining water quality.

Mortality associated with crossing roads is especially problematic given that the turtles that cross roads are often pregnant females in search of a nesting site.

Every individual turtle collected from the wild to become a pet has a profound effect because each turtle removed is no longer able to be a reproducing member of that population.

You can help the spotted turtle, and many other wildlife species, by conserving wetland habitat wherever you can. Use proper erosion and sediment controls during work that involves disturbance of soils adjacent to wetland systems. The creation or maintenance of a buffer strip of natural vegetation (minimum of 100 feet) along wetlands and watercourses will protect the water quality of the wetlands that these turtles require.

Leave turtles in the wild. They should never be kept as pets. Whether collected singly or for the pet trade, turtles that are removed from the wild are no longer able to be a reproducing member of a population. Every turtle removed reduces the ability of the population to maintain itself. You should also keep in mind that caring for a pet turtle is not as easy as you may think. They require specific temperatures, diets, and lighting for digestion and shell health. Cages must be kept clean as turtles can carry salmonella. And, turtles live a long time. No person shall possess in excess of one spotted turtle at any time.

Never release a captive turtle into the wild. It probably would not survive, may not be native to the area, and could introduce diseases to wild populations.

Do not disturb turtles nesting in yards or gardens.

As you drive, watch out for turtles crossing the road. Turtles found crossing roads are often pregnant females and they should be helped on their way and not collected. Without creating a traffic hazard or compromising safety, drivers are encouraged to avoid running over turtles that are crossing roads. Also, still keeping safety precautions in mind, you may elect to pick up turtles from the road and move them onto the side they are headed. Never relocate a turtle to another area that is far from where you found it.

Learn more about turtles and their conservation concerns, and educate others about how to help Connecticut's turtle species.

The production of this Endangered and Threatened Species Fact Sheet Series is made possible by donations to the Endangered Species/Wildlife Income Tax Checkoff Fund.