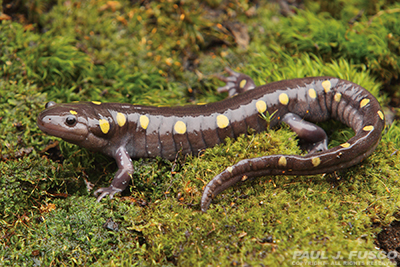 Background and Range: One of the surest signs of spring is the mass migration of spotted salamanders. These underground dwellers emerge from winter dormancy with the season’s first warm rains, and then travel to their breeding pools. This salamander is in the family Abystomatidae which includes the large, stout-bodied mole salamanders. Distinguished by its large size and bright yellow spots, the spotted salamander is a vernal pool indicator species that has an important role in its respective niche.

The spotted salamander's range covers much of the eastern third of the United States and also the southeastern regions of the Canadian Maritime Provinces. It is Connecticut's most widespread mole salamander.

Description: Large, robust, and with a broad head, this salamander ranges in length from 4.75 to 6.75 inches (120-200mm). The back is dark in coloration while the lower sides and bottom regions are lighter, usually gray. Two irregular rows of bright yellow spots are along the back and tail. Females are considerably larger than males. Recently transformed young have greenish-yellow flecks, while larvae range from olive brown or black to various gray shades. The external gills of the larvae help distinguish them from frog tadpoles.

Habitat and Diet: Depending on the time of year, spotted salamanders can be found in aquatic, terrestrial, and subterranean habitats. Although they occur in a variety of habitats, they tend to prefer forested areas adjacent to swamps, ponds, and creeks. Secretive and rarely seen, these salamanders spend most of their time hiding in burrows or under moist leaf litter. Breeding adults and larval stages use aquatic habitats, such as seasonal short-lived pools, artificial ponds, wet meadows, and deciduous forests with moist substrates and lower soil temperatures. The salamanders hibernate in burrows or crevices underground during winter.

Spotted salamanders feed on worms, slugs, snails, spiders, millipedes, crickets, beetles, ants, and other invertebrates. In turn, they are food for some snakes, birds, fish, and mammals.

Life History: Because spotted salamanders are secretive and spend most of the time underground, they are seldom seen except in early spring (March-April) when they migrate in large numbers to breeding pools. Even then, they are active only on rainy nights. Males arrive to the breeding pools first where they deposit packets of sperm (spermatophores) on leaves and twigs lying on the bottom of the pools. The females follow on the next rainy night where they attach approximately 100 eggs to submerged sticks or plants. The eggs become a globular, fist-sized mass when the jelly-like substance that covers the eggs comes in contact with water.

After mating, the adults migrate back to summer feeding grounds and their underground homes. Larvae hatch in approximately 30 days and undergo metamorphosis during summer, transforming into miniature versions of the adults. The larval cycle is often timed with the ephemeral cycle of the breeding sites. Newly transformed spotted salamanders emerge from wetlands in late summer/early fall to migrate to terrestrial sites.

Interesting Facts: The skin of the spotted salamander secretes a noxious substance that deters many would-be predators. Predation is most common during egg and larval cycles before the salamander develops its toxicity. Spotted salamanders will even head-butt or bite in self defense.

Conservation Concerns: Connecticut's spotted salamander population appears to be undergoing a long-term decline, not only because of the loss of its vernal pool breeding habitats, but more so due to the reduction of upland habitat surrounding aquatic breeding sites. Most wetland regulations prescribe a 50- to 100-foot wide forested buffer around vernal pools. This buffer is to maintain water quality. Maintaining the amphibian diversity of a vernal pool requires 500 feet or more of primarily forested habitat surrounding breeding pools. There also are concerns that low pH and acid rain in the spotted salamander's aquatic habitats can cause eggs to die.

Spotted salamanders are declining in urbanized and fragmented habitats throughout the northeastern United States, mainly because they prefer undisturbed habitats and are less tolerant of areas with human encroachment and development.

Because spotted salamanders migrate together in large numbers during the early spring breeding season, many individuals are killed by vehicles as they cross roads. In response, some towns and agencies have installed “amphibian tunnels” to funnel these creatures safely underneath roads in hotspot migration areas.

If you find a spotted salamander in the wild, leave it where you found it and only take photographs. Every individual salamander is vitally important to its local population.

Urge your town to install amphibian tunnels at migration hotspots that overlap roads. If you are fortunate enough to witness a mass spring migration, you can help move salamanders from one side of the road to the other, as long as it is completely safe to do so. This can be done with gloves and small buckets as to not stress the salamanders or be exposed to any secretions.