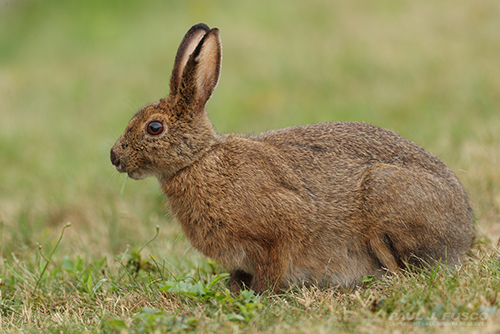 Background: Although the snowshoe hare is a native species in Connecticut, the state is at the southern fringe of the hare's range. Therefore, snowshoe hare populations were never at the levels that existed in northern New England and Canada. To increase the hare’s abundance in Connecticut, several attempts were made to translocate hares from New Brunswick, Canada. In 1940 and 1941, approximately 2,000 snowshoe hares were primarily released in the towns of Torrington, Hartland, and Thompson. Evidence also suggests that several local sportsmen's organizations continued the release of snowshoe hares in the northwest and northeast corners of the state until the early 1970s. This practice was discontinued due to concerns regarding the potential introduction of disease, such as tularemia, and parasites into Connecticut’s native snowshoe hare and cottontail rabbit populations, along with the lack of restoration success. Harvest information indicated snowshoe hares were moderately common in the northeast and northwest corners of the state until approximately the 1970s. By the 2000s, this species had declined to the point that observations were noteworthy events.

Range: The snowshoe hare is typically a creature of boreal and coniferous forests, hence this species is more common in northern New England. However, because young forests and early successional habitats combined with higher latitudes mimic the requirements of the hares, the animals have been known to exist as far south as the mountain tops in Virginia and along the Rocky Mountains to New Mexico. In Connecticut, the snowshoe hare’s historic distribution encompassed suitable habitat throughout Litchfield County, west to the higher elevations along the western edge of Hartford County. On the eastern side of the state, hares were found in the northeastern section of Middlesex County and along the Rhode Island border as far south as Pachaug State Forest. By 2000, snowshoe hares remained in remnant populations, primarily in the northwestern (Canaan, Norfolk) and northcentral (Hartland, Barkhamsted) parts of the state.

Description: The snowshoe hare is the largest native lagomorph in Connecticut and one of the few mammals that changes fur coloration seasonally. An adult snowshoe hare is between 18 and 20 inches and weighs 3 to 4 pounds. Both sexes are of similar size. Hares possess powerful hind legs, large feet, and elongated ears. The “snowshoes” on their feet, formed by long, coarse hair which covers the soles of the feet, serve to support the animal on soft snow and prevent slipping on icy surfaces. While many animals are hampered by deep snow, the snowshoe hare bounds swiftly over all but the deepest and softest snows.

In spring, seasonal color change begins on the ears and feet, moving upwards and toward the back until the entire hare’s white, heavier, longer, thicker coat is replaced by a shorter coat that can range from tan to greyish brown. The change in pelage (fur) coloration takes about 10 weeks to go from white to brown. In late autumn, the reverse process occurs with the long, black guard hairs and the secondary yellow and brown underfur are replaced by the characteristic white fur.

Habitat and Diet: Snowshoe hares are found in woods where dense thickets and underbrush provide food and protection. Younger, brushy growth, such as that found in timber management areas or overgrown fields, form the best habitat. Hares can also be found in cedar or spruce swamps, as well as in laurel thickets.

Despite its size and speed, the snowshoe hare limits itself to a relatively small home range. The average hare may spend its entire life on less than 50 acres. Some may spend months without going further than 300 feet from their bedding area. These areas are called forms, and consist of shallow depressions made by the weight of the animal pressing on the vegetation. The forms are generally located on a knoll, providing good visibility and drainage, and overhung by protecting branches. Forms may also be located in clumps of dense understory, such as shrubs or tall weeds. Hares will usually maintain more than one form within a territory, but one will be favored above the others.

Snowshoe hares prefer to feed at dusk or in darkness along “hare lines”, which are well-defined browse lines that allow the hares to use their speed and agility to escape predators. The summer diet consists of tender buds and growing twigs or succulent herbs, such as grasses, clover, or jewel weed. During winter, twigs and bark of high-bush blueberry, birches (gray and yellow), alder, and maple become the primary food items. However, while hares primarily subsist on vegetation, they have been known to ingest their own feces or chew on carrion in order to supplement their diet with essential nutrients during lean times. 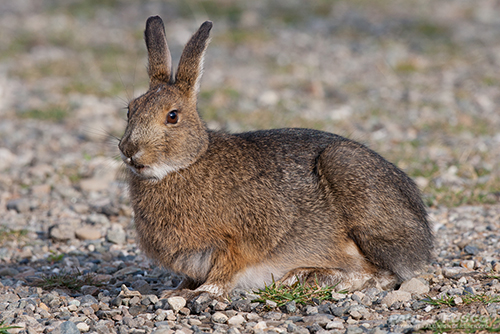 Life History: Breeding begins in early March, followed by a 36-day gestation period. Females may have up to 4 litters per year, though they most commonly produce 2 to 3. Litter sizes can range from 1 to 9 young, averaging between 3 and 4. The newborn leverets (young hares) weigh approximately 2.5 ounces (75g) and are born with their eyes open and a coat of very fine, close brown fur, unlike rabbits which are born blind and naked. Within a few hours of their birth, the leverets can walk and hop about. They require little care from the females, nursing for as little as 2 weeks before transitioning to vegetation. The exception to this is the last litter of the year, which may nurse for a longer period in order to build fat stores for the winter. The young are fully weaned within 1 month and fully grown within 3 months. Though they do not reach full maturity until a year old, the young are independent from the time they are 4 to 6 weeks old.

Life expectancy is as high as 8 years; however, fewer than 2 in 100 reach the age of 5 and only 30 percent survive their first year of life.

Predation: Although snowshoe hares are equipped with physical characteristics (i.e., elongated hind feet, seasonal pelage color changes) which allow them to evade predators, a number of animals prey on this species. Across the snowshoe hare’s range, and specifically in Connecticut, the primary predator is most likely the bobcat. Other mammals known to prey on snowshoe hares include coyotes, foxes, weasels, and, opportunistically, black bears and fishers. Great-horned owls and northern goshawks are examples of aerial predators that readily capture and feed on snowshoe hares. The hare’s ability to modify its fur color can both enhance and hinder winter survival. In years with little snow cover, a white hare, on a brown background makes detection and subsequent capture by predators much easier. Whereas, years with abundant and prolonged snow, provide an advantage to the hare both in camouflage and maneuverability, thus assisting the hare with eluding and evading predators. A reduction in the amount of snowfall and its duration on the landscape has been seen in Connecticut during the past 5 decades. This lack of snow and increases in predator populations, such as bobcats and coyotes, may have aided in the decline of the snowshoe hare population.