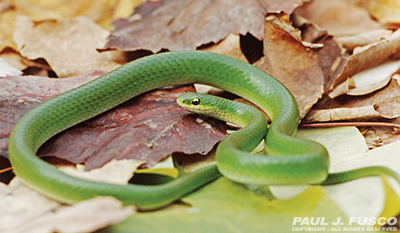 Background: The thin and small smooth greensnake is irregularly distributed in Connecticut. It is easily distinguished from the other native snakes by its striking solid green coloration. This state species of special concern is facing the loss of its specialized habitat from the Connecticut landscape due to development and forest succession. In addition, populations are threatened by effects from insecticide spraying (contaminated prey). Mowing (lawns and hayfields) and farm equipment also cause problems by reducing vegetation height and causing direct mortality. Road mortality is another concern for this species, as well as predation by house cats.

Populations of smooth greensnakes are sporadic in location and abundance in Connecticut, leading to a general scarcity. Some sites may have larger populations, while others have only a few individuals. Population declines have occurred in areas where forested habitat has reoccupied open, grassy areas. Populations can also fluctuate with prey (insect) availability and abundance.

Range: “Spotty” would best describe the greensnake's range, both on local and broad scales. Overall, populations are mostly concentrated in New England, the southeastern Maritime Provinces of Canada, and northern portions of the Midwest. There are many isolated populations across the northern portion of the United States, stretching as far west as Colorado, Wyoming, and Utah. Random patches also occur in coastal Texas, New Mexico, and Chihuahua (Mexico).

In Connecticut, smooth greensnakes are found mostly in the eastern half of the state where suitable habitat exists. They are rare in the southwestern Connecticut and only occasionally found in the northwestern portion of the state.

Description: Small and delicate, this snake ranges from 12 to 25 inches in length. Its dorsal (back) coloration is solid green with unkeeled (smooth) scales, while the underside is yellow or off-white. Juveniles resemble adults but are more olive-green in color.

Habitat and Diet: Smooth greensnakes favor moist, open habitats, such as old fields, meadows, pastures, fens, coastal grasslands, and edges of wetlands. Occasionally, this snake may inhabit sparsely forested areas with scattered shrubs and trees, such as mountaintop balds. Rural, undisturbed locations appear to be preferred, but smooth greensnakes have been found in urban and suburban areas as well. Greensnakes can be found basking on rocks, logs, or other debris. Sometimes, this snake may be absent from seemingly suitable habitat.

Smooth greensnakes are insectivores; they feed on a variety of insects and spiders.

Life History: Smooth greensnakes reach sexual maturity at 11 to 12 inches, usually in their second year. Mating occurs in spring to late summer. Female greensnakes in New England may lay their eggs and incubate them externally (oviparous) or retain their eggs and incubate them internally for a period of time (ovoviviparous), depending on summer weather conditions. A clutch of 3 to 13 eggs typically hatches sometime in July through September.

These snakes are active in Connecticut in May through November. Winters are spent underground, usually in rodent burrows, and sometimes with other snake species.

Interesting Facts: Smooth greensnakes are nonvenomous and completely harmless to humans. They are docile and will usually flee if threatened. These snakes have ecological importance by controlling insect populations and, in turn, providing a food source for other animals, such as hawks, great blue herons, raccoons, and foxes.

Although they are capable climbers, smooth greensnakes are much more likely to be found on the ground. They can be observed basking on rocks, logs, or other such basking sites.

Shortly after death, this snake loses its green coloration and turns bright blue.
The smooth greensnake is often confused with its similarly-colored close relative, the rough greensnake. However, the rough greensnake does not occur in Connecticut but in the southeastern United States. This species is considered to be more arboreal than terrestrial. It also has keeled scales (raised ridge in the center of each scale).

Take the time to learn about, understand, and respect this vitally important reptile, and share your knowledge with others. If you encounter a smooth greensnake, observe it from a distance and allow it to go on its way. All snakes will retreat from humans if given a chance. You should not try to agitate it by getting too close or handling it. Although docile, it may try to bite. Never try to collect a greensnake as a pet. Not only is this illegal, but this snake does not survive well in captivity.

Do NOT attempt to kill any smooth greensnakes under any circumstances as this is an illegal action. Greensnakes are protected by Connecticut's Endangered Species Act and persons who kill or collect this special concern snake could be faced with fines or legal action. If you see or know of any suspicious or neglectful activity directed towards these snakes, you can report violators to the DEEP at the 24-hour, toll-free TIP hotline (800-842-HELP) or DEEP Dispatch at 860-424-3333.

Be a strong proponent of conserving greensnake habitats. If your property has habitat containing this snake, consider appropriate pasture management protocols. Be cautious of wildlife when mowing or using agricultural equipment, and consider letting some areas remain unmowed. It you must use any pesticides or herbicides, consider using organic varieties that will not harm beneficial, native wildlife. Preserving pastures and fields through agricultural easements also will benefit smooth greensnakes.

Positive identifications of smooth greensnakes can be reported to deep.wildlife@ct.gov. If you encounter a snake problem, assistance and more information about snakes can be found by visiting the Snakes in Connecticut webpage or calling the DEEP Wildlife Division at 860-424-3011.