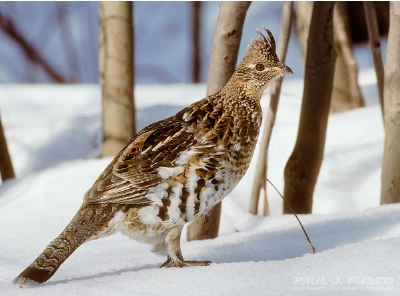 Background: The ruffed grouse is a native species of Connecticut and a longtime resident of the state's landscape. The agriculture that was once intensive in Connecticut is now largely abandoned and farmland that reverted to forests provided excellent habitat for grouse. However, as the state's forests have matured, their value to grouse has decreased. Without forest management practices that create young forest stages (seedlings and saplings), grouse habitat will continue to decline.

Range: Ruffed grouse populations are widespread, ranging from the woods of Alaska and northern Canada south to the mountains of Georgia and California. The birds are non-migratory, spending their entire life within a small area.

Description: The ruffed grouse is a medium-sized, fowl-like game bird best known for its courtship displays and thunderous takeoffs. It is distinguished by the dark ruff-like feathers on the neck region. The broad tail is marked with a prominent dark band near the end. Ruffed grouse exhibit two color phases, reddish brown and grayish brown. This difference in color is most evident in their tails. Gray-phased birds predominate in the northern areas of their range, while red-phased birds predominate to the south. In Connecticut, both color phases are common.

They feed on seeds, buds, and fruits of many plants. Newly-hatched chicks depend almost entirely on insects as a food source. Adults may supplement their diet with up to 30% insects. Fruits and berries become important in summer, and grouse feed heavily on acorns in fall. During winter, they will feed primarily on catkins, twigs, and buds.

Life History: The ruffed grouse breeding season begins in April in Connecticut. Males begin drumming (a sound created by beating the air with their wings) to advertise their presence to females. Other males are also alerted, and during this time considerable strutting and fighting may occur to determine who will breed with the females.

After breeding, the female is left to nest and raise the young on her own. The nest is a slight depression scratched out at the base of a tree or rock, or alongside an old log. It is usually lined with dry grass, leaves, pine needles, or other materials available near the nest site. The female lays about 2 eggs every 3 days. After all the eggs (9-14) are laid, she begins incubation, usually a period of 23-24 days that may be lengthened by cold or wet weather or prolonged absences from the nest. The natural camouflage of the hen’s coloration and nest makes it almost impossible to see her while she is sitting on the nest. If the nest is destroyed during early incubation, the hen will usually renest. Renests are rare if the nest is destroyed late in the incubation process.

Within a few hours of hatching, the grouse chicks are able to run and scurry about. They are able to fly in about 10-12 days. By 6 weeks of age, the young have well developed plumage and resemble the adult in color. The average brood size by fall is about 5 birds. Young chicks are very sensitive to dampness, and a period of rain in late May or early June may affect brood survival. 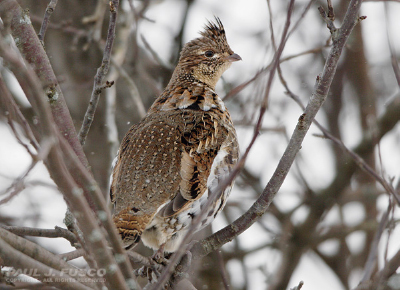 In early fall, many grouse exhibit a dispersal behavior commonly referred to as “crazy flight.” At this time of year, grouse are often seen in unusual habitats or are victims of collisions with trees, cars, houses, etc. This strong urge to disperse is largely exhibited by young birds, whereas adults tend to remain within the previous year’s home range.

Evergreen trees are an important source of winter cover for grouse in Connecticut. During periods of heavy powdery snow, grouse will use snow roosts for cover.

Many animals prey on grouse. Foxes, bobcats, coyotes, bird-eating hawks, and falcons, among others, will take grouse. Grouse rely on their cryptic coloration and remain still to avoid detection when predators are about. If sufficiently frightened, they will thunder into the air to escape, although they are capable of near silent flight. When with young, hens will attempt to lead potential predators away by feigning a broken wing.

Ruffed grouse are an important game bird in Connecticut and throughout their range. The hunting season for grouse is held in the fall. Specific hunting season dates and information can be found in the current Connecticut Hunting and Trapping Guide.

Management: Connecticut’s ruffed grouse population exists at a low abundance, primarily across the northern third of the state. The main factor that has led to the decline of this species is the loss of habitat. Although Connecticut is nearly 60% forest, less than 5% is in young forest habitats, which are mandatory for grouse survival. The key to managing grouse populations is to maintain young forests through timber harvest operations. The removal of overstory trees allows sunlight to reach the forest floor, enabling seedlings and saplings to take the place of large mature trees. Grouse habitat is ephemeral. Post timber harvest, it takes about 5 to 7 years before forest regeneration is suitable for grouse and, at best, this habitat only lasts for a maximum of 20 years. Long-term grouse population survival depends on careful timber harvest planning. Forest management plans must create a mosaic of timber harvests with corridors and proximity allowing for grouse dispersal. As one forest cut matures beyond suitable grouse habitat, another planned cut is there to take its place. This forest patchwork creates a variety of forest age classes necessary for grouse to complete their life cycle.