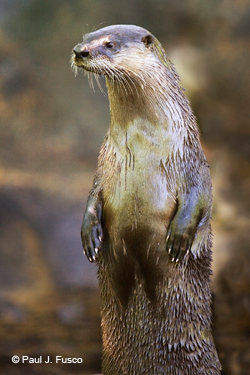 Background: Most Connecticut residents rarely have an opportunity to observe river otters in the wild as otters generally avoid contact with humans. However, even though otters may not be seen often, the state's river otter population is healthy and stable.

Description: The river otter is the largest member of the weasel family (Mustelidae) found in Connecticut. It has a slim, stream-lined body with short legs and a long, muscular tail that is wider at the base and thinner at the tip. On average, otters can be 36 to 50 inches long from the head to the tip of the tail (the tail can measure from 12 to 18 inches long by itself) and they weigh between 12 and 25 pounds. The otter's overall color is dark brown, which pales to gray on the underside. The otter's head is small with a broad nose and small eyes and ears. It also has long whiskers and a short muzzle. Otters spend most of their time in the water and have large, webbed feet for this purpose. They have sharp, strong claws on their feet that help them catch prey. Males and females are similar in appearance; however, males are larger.

Habitat and Diet: River otters live in aquatic habitats -- streams, rivers, lakes, and freshwater and saltwater marshes. They prefer to live in marshes and along wooded rivers and streams with pools and overhanging rocky banks. They will use dens made by beavers, muskrats, or woodchucks.

The nesting den is usually an abandoned bank burrow of a muskrat or beaver; however, a hollow at the base of a tree or a hollow log also may be used. The chamber is lined with shredded bark and grasses. The litter may number from one to five but normally consists of two or three pups. At birth, the young have black fur and are blind, toothless, helpless, and about the size of a kitten. Their eyes open about a month later. Otter pups grow quickly and leave the den at 2 months of age. The young are cared for by the female and they remain with her for almost a year until the next litter is due.

Interesting Facts: A thick coating of insulating fat overlays the body of an otter, and the underfur is soft, dense, and durable. Air becomes trapped in the fur and helps to insulate the otter when it is underwater. The underfur of an otter is so durable that it is rated as 100% on the scale of fur durability and is used as the standard by which other furs are judged.

The otter is a graceful and swift swimmer, capable of staying submerged for up to 4 minutes and of swimming a quarter of a mile under water. Otters can dive to a depth of 60 feet and can reach a speed of 7 miles per hour when swimming in water. The flattened and well-muscled tail enhances the otter's swimming ability. The ears and nose have a valve-like skin that closes and keeps the otter watertight while under water. Otters have long, stiff, and highly sensitive facial whiskers behind and below the nose that aid in finding and capturing prey.

The home range of an otter is extensive, covering as much as 50 miles. It may take two weeks to a month for an otter to cover its territory. An otter rarely stays in one place for more than a few days. While moving from one water course to another, it may have to make several overland passages. While not built for land travel, the otter does move along rapidly in an awkward lope. In snow, an otter can move quickly by throwing itself forward on its belly and sliding with all four legs tucked backwards. A similar motion on ice is extremely efficient.

Otters are active all year and they are generally nocturnal (active at night) or crepuscular (active at dawn or dusk), although diurnal (daytime) activity is not uncommon. Being quite sociable, otters are often observed in family groups in summer and early fall. Otters "play" more than most wild animals -- wrestling, chasing other otters, tossing and diving for rocks, toying with live prey, and, occasionally, sliding. They usually will make a slide down a stream bed directly into the water, using this slide over and over. Otters also have been seen dropping a pebble in the water, swimming underneath it, and catching it on their forehead.

Predators of the otter include coyotes, bobcats, foxes, and owls.

Due to their diet and habitat, otters may serve as indicators of the health of aquatic ecosystems.

Beavers are important to otters because the marshes they create make ideal otter habitat. Plus, otters will use abandoned beaver dens.

Connecticut has a legal trapping season for river otters during the middle of winter to ensure that only prime furs are harvested. Trappers must take and pass a Conservation Education/Firearms Safety course for trapping before they can purchase a trapping license. They also must follow certain rules and regulations. The DEEP Wildlife Division requests that trappers submit carcasses of trapped river otters so that the age structure and productivity of the population can be determined. Consult the current Connecticut Hunting and Trapping Guide to learn more about trapping seasons and regulations. The guide is available at most DEEP offices and on the DEEP website.

This publication is partially funded by the Federal Aid in Wildlife Restoration Program. Funds are provided through an excise tax on the sale of sporting firearms, ammunition, and archery equipment. (rev. 3/15)