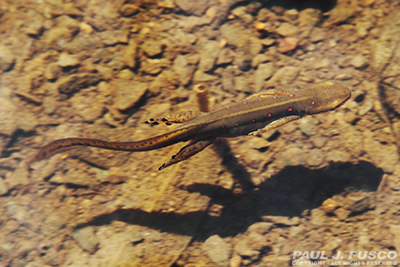 Background and Range: The red-spotted newt (also commonly referred to as the eastern newt) is widespread and familiar in many areas of Connecticut. Newts have four distinct life stages: egg, aquatic larvae, terrestrial juvenial (or “eft”), and aquatic adult. Their life cycle is one of the most complex of all the salamanders; starting as an egg, hatching into a larvae with external gills, then migrating to terrestrial habitats as juveniles where gills are replaced with lungs, and returning a few years later to their aquatic habitats as adults which retain their lungs.

In Connecticut, the newt is found statewide, but more prominently west of the Connecticut River. The red-spotted newt has many subspecies and an extensive range throughout the United States. 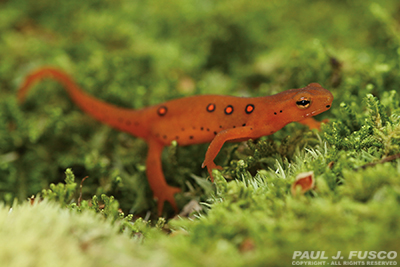 Life History: Adult newts can be active even before ice surfaces melt. Primarily, they are active February through October. Breeding occurs in late winter into early spring. After an elaborate underwater courtship, where the male holds his tail above his body and waves it in the water, the female deposits a few hundred eggs over several days, attaching them to submerged aquatic vegetation or fallen leaves in the water. Larval newts will hatch in 3 to 8 weeks, complete with external gills. Larvae will undergo metamorphosis to terrestrial efts in 2 to 5 months. The brilliantly colored efts will remain in nearby upland habitat for the next 1 to 3 years of their lives. Efts will often come out from cover on rainy summer days. During the latter eft stage, the tail will begin to flatten out, the coloration will change to green, and the newly-transformed eft will return to water to breed and live out its life as an adult newt.

Interesting Facts: Red-spotted newts can be indicators of healthy wetlands and forests; therefore, they are an important environmental species. They also help control aquatic insects, including mosquitoes, and are aesthetically pleasing with their vibrant colorations at all life stages.

This salamander secretes poisonous toxins on its skin to make it distasteful to predators, and the eft’s bright coloration serves as a warning. However, some animals, like the ribbonsnake, find ways around the toxins or are immune altogether and will prey on newts.

Courtship in newts is fascinating. The male will lure and entice the female with his many red spots and wiggling tail, which releases pheromones (specialized chemicals). The male, with his hind legs, will grasp the female just behind her forelimbs and then rub his chin along her snout just prior to external fertilization. Competition occurs in this species and “mating balls” can often be observed as multiple males fight over a female.

If you find a red-spotted newt, or the terrestrial eft stage, in the wild, leave it where you found it and only take photographs. Every individual salamander is vitally important to its local population. The DEEP Wildlife Division strongly discourages the collection of newts or other salamanders as most do not do well in captivity, they may develop diseases or disorders, and collection can negatively affect populations.

Avoid the use of fertilizers, herbicides, and insecticides in your yard. If you need to use these products, purchase ones that are natural and organic and use sparingly.

Spread the word about salamanders! Awareness and education of the red-spotted newt's life history and habits are invaluable tools for conservation. Consider the preservation of important wetland habitats and nearby terrestrial habitats. Not only are salamanders important, but their presence indicates a healthy habitat.