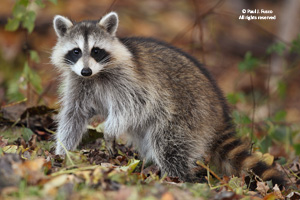 Raccoons are common throughout Connecticut. The state’s expanding human population has probably benefited this opportunistic species; concentrations of people provide easy access to food sources, such as garbage, gardens, and bird feeders. Raccoons are adaptable, thriving in a large variety of habitat types. They are abundant in urban, suburban, and rural areas.

The raccoon has been an economically important furbearer in Connecticut due to its abundance and pelt value. Raccoons are harvested each year during the regulated hunting and trapping seasons, providing recreation for many Connecticut sportsmen and helping to control local raccoon populations.

Raccoons range from Canada and throughout the United States (excluding the high elevations of the Rocky Mountains and much of the Southwest) into Mexico and Central America.

Description
One of the most easily recognized furbearers, the medium-sized raccoon is distinguished by a black mask across the eyes and cheeks and black rings around the bushy tail. Long, thick fur gives raccoons a typical gray-brown color, with variations ranging from sienna to silver. Other characteristics include short, slightly rounded ears bordered by white fur, and a long, pointed snout. Most adults weigh between 10 and 20 pounds, with males typically larger than females. Raccoons range in length from 23 to 38 inches, including the tail.

Habitat and Diet
Raccoons prefer wooded areas near streams, ponds, and marshes but are highly adaptable and can live in agricultural areas and in close proximity to human developments. They make their dens in tree cavities, abandoned woodchuck or fox burrows, rock crevices, brush piles, chimneys, attics, sheds, and other structures.

Life History
Raccoons breed in late winter or early spring. The male does not remain with the female after breeding. The young are born in April or May after a 63-day gestation period. Females produce 1 litter per year, with an average of 4 cubs per litter. The cubs are born blind, helpless, and are covered with yellowish-gray fur. After 30 to 40 days, the cubs leave the den and will travel with the female for short distances to search for food. At 3 to 4 months, the cubs begin to forage on their own.

History in Connecticut
Since the late 1800s, Connecticut’s expanding human population has probably benefited this opportunistic species; concentrations of people provide easy access to such food sources as garbage, gardens and bird feeders. Raccoons are now abundant in both urban and rural areas throughout Connecticut.

Interesting Facts
Raccoons are most closely related to the weasel (Mustelidae) and bear (Ursidae) families. They have keen senses of hearing, sight, and touch, but taste and smell are less well developed.

The front and hind paws of raccoons have 5 digits each. The dexterous front paws enable the raccoon to grasp and manipulate food items. Raccoons are excellent climbers, and can descend a tree head first.

Raccoons are primarily crepuscular (active at dawn and dusk) and nocturnal (active at night). They occasionally venture out in the daytime, but that does not mean that they are diseased. Raccoons often adjust their feeding schedules, especially in spring when rearing their young. They may "den up" during the coldest periods in late fall and winter; however, this is not true hibernation, and the animals will wander out during warm spells.

Generally, raccoons are not social, but some pairs and families travel together.

Raccoons, especially large populations, prey on birds and their nests. In Connecticut, they often raid bluebird nest boxes that are not protected with predator guards. They also are problematic for herons and egrets on offshore islands where repeated predation can cause abandonment of the entire colony.

Raccoon Rabies: Raccoon rabies first appeared in Connecticut in 1991 and raccoons are the primary carriers of this virus in the northeastern United States. Other mammals, including dogs, cats, skunks, foxes, woodchucks, and livestock, also have been infected with rabies. The following symptoms may indicate an infection from rabies, distemper, or other diseases: unprovoked aggression, impaired movement, paralysis or lack of coordination, unusually friendly behavior, and disorientation. Daytime activity alone is not indicative of a raccoon with rabies; other symptoms also must be obvious. Contact with any wild or stray animal should be avoided, especially if it is behaving abnormally. Report sick or strange-acting animals to the local police, animal control officer, or the DEEP. More information on rabies is available on the Nuisance Wildlife Control and Rabies webpage or from your local health department.

Canine Distemper: Other diseases, such as canine distemper, can cause neurological symptoms similar to rabies. Distemper is a common disease that is usually fatal. However, it is not transmissible to humans and most domestic dogs are vaccinated against this virus.

Roundworm: Raccoons are primary carriers of round worm, which is shed in raccoon feces. The roundworm rarely causes problems for raccoons, but it can be dangerous to other mammals, including humans. A person can become infected if he or she comes into contact with an item that is contaminated with raccoon feces. Therefore, it is important to keep children's sandboxes covered as raccoons may use them as latrine sites.

Management of Nuisances
Because of their ability to coexist with humans, raccoons can become a nuisance when they damage gardens, raid garbage cans, or inhabit human structures. They can be especially destructive on farms, where they feed heavily on crops. Because they may carry rabies, problem raccoons cannot be relocated, and only specified wildlife rehabilitators can accept injured or orphaned raccoons for rehabilitation with certain restrictions.

There are several preventive measures that homeowners can take to control or reduce problems with raccoons:

Do Not Feed or Touch Raccoons: Raccoons are wild animals. Feeding, whether directly or indirectly, may cause them to lose their fear of people.

Secure Garbage: Keep garbage in tightly closed containers. Store containers in an outdoor storage bin or in a garage or shed, and set out garbage on the morning of pickup instead of the night before. Run a rubber strap, rope, or wire through the lid and attach to the can handles. Placing ammonia directly in the can may help to repel raccoons. Keep compost in secure, vented containers to prevent access.

Feed Pets Indoors: Pet food should not be put out outside. Outdoor pet food inadvertently feeds a variety of wildlife species, including raccoons. Raccoons that congregate at a feeder also can facilitate the spread of diseases from raccoons to other wildlife or domestic animals. Livestock food should be stored in secure containers and not left outside where it is available to raccoons. Bird feeders should be placed away from trees or other structures that can be climbed by raccoons.

Eliminate Potential Denning Areas: Close off openings under porches and buildings. Seal any openings that lead into sheds or attics.

Eliminate Access Points: Raccoons can easily access roofs by climbing trees, downspouts, vines, or a trellis located near the house. Roofs and chimneys should be well-maintained to prevent raccoons from entering houses. Replace loose shingles and repair any holes near the eaves of the roof. Limiting access to the roof by trimming trees and shrubs also may be helpful.

The simplest and most effective, permanent solution to the problem of raccoons living in a chimney is to cap it. However, there may be young present, depending on the time of year. If the young are old enough to climb out, cap the chimney after the raccoons have left for the night. Sometimes, a female raccoon can be encouraged to move her young to another location by the use of repellents, such as ammonia, combined with a light and noise from a portable radio placed near the damper.

Install Fencing: Electric fences may help to keep raccoons out of gardens. Wires must be spaced close together and close to the ground to be effective.

Hunting and Trapping: On farms, where more effective methods are needed to control a large number of animals, hunters and trappers can harvest problem animals on the property during the regulated hunting and trapping seasons or by special permit at other times of the year.