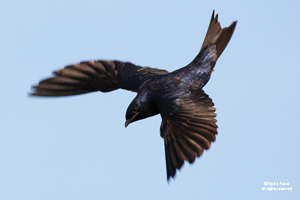 Background:
The purple martin is one of North America’s most beloved songbirds. It is known for its skillful aerial exhibitions, tolerance of humans, and pleasant twittering call. Humans have long sought to attract purple martins. Native Americans hung hollow gourds in saplings or on poles to encourage nesting in their villages. When European settlers arrived in the New World, they also adopted the custom of hanging gourds for martins. Today, the entire eastern race of purple martins (east of the Rocky Mountains) is totally dependent on humans for supplying them with nesting sites in the form of specially-designed houses or hollow gourds. If humans were to stop supplying martins with homes, they would likely disappear as a breeding bird in eastern North America. West of the Rocky Mountains, purple martins largely nest in the ancestral ways, in abandoned woodpecker nest cavities or other natural cavities in dead trees or cliffs.

Purple martins have declined in numbers over much of their range, including New England and Connecticut. Competition from more aggressive, non-native European starlings and house sparrows for the nesting compartments people offer has contributed to this decline. Pesticide use and prolonged weather extremes (unseasonably cold, rainy periods, heat waves or droughts) also have reduced martin numbers.

In 2015, the purple martin was down-listed from a state threatened species to a species of special concern under Connecticut's Endangered Species Act. Conservation efforts have increased the number of purple martin houses and hollow gourds in Connecticut, thus providing more nesting sites. Through better communication with private purple martin landlords, the Wildlife Division discovered that the state's martin population was higher than previously thought.

Distribution in New England: This swift-flying bird is a seasonal Connecticut resident that arrives in New England during April to begin its breeding and nesting season. As long as conditions remain favorable, martins will return year after year to the exact same nesting location. Their range only expands if suitable habitat is no longer available at a previously used site or if new sites or artificial roosts nearby attract younger returning martins.
Vast congregations of purple martins begin their long southern migration in September to wintering grounds in South America, particularly Brazil.

Description: Purple martins are often called “dark swallows” in reference to their dark, glossy, purplish-blue plumage. Females and young martins are grayer and paler on their undersides than males. Purple martins are the largest member of the swallow family, ranging from 7.5 to 8.5 inches in length.

Females are often confused with their smaller relative, the tree swallow. The larger size of the martin and the grayness of its throat and breast distinguish it from the tree swallow, whose undersides are a vivid white. Male martins can be distinguished in flight from equally iridescent and similarly-sized starlings by their forked tail, longer wings, and typical swallow flight of short glides alternating with rapid flapping.

The complex song of a martin is a mixture of chortles and gurgles that begin with descending notes and end with a prolonged twitter. The call in flight is a jubilant twittering.

Habitat and Diet: Purple martins inhabit both urban and rural areas. They prefer open, grassy areas and forest openings near streams, rivers, marshes, ponds, or lakes. These openings provide a large “swoop zone” for catching insects. The most attractive backyard habitats include expanses of lawn or meadow near a large body of water.

Purple martins feed entirely on insects. Vast amounts of insects, caught in flight, are consumed daily. A popular misconception is that martins are a major predator of mosquitoes. Extensive studies of feeding habits have shown that mosquitoes make up less than 3% of the martin’s daily diet. Ironically, martins consume large quantities of adult dragonflies and damselflies whose aquatic nymphs are major predators of developing mosquito larvae.

Life History: A purple martin colony is not an assemblage of birds that travels or functions as a flock. Rather, it is a random grouping of birds attracted to a favorable breeding site. Colony members arrive and depart independently of each other. 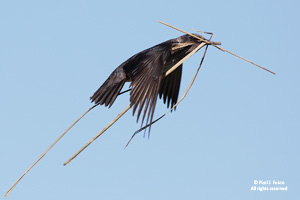 Purple martins seek natural cavities, gourds, or man-made apartment houses for nesting that are 12 feet or more above ground. In Connecticut, they only nest in man-made houses or hollow gourds. Martins will return to the same nest site year after year as long as the habitat conditions meet their needs. Purple martins exhibit a stronger communal lifestyle than most other birds and will nest in colonies of varying sizes. This weak sense of territoriality extends primarily to other martins and not to competitors like starlings and house sparrows.

Male and female martins work together to construct a crude nest of grass and twigs set on a thin layer of mud. Mud is often banked up along the front edge to prevent the eggs from rolling out of the nest cavity. The female incubates an average of 4 to 6 smooth, non-glossy white eggs for 15 to 18 days. After hatching, the young remain in the nest for 24 to 28 days and are fed insects by both adults. Young martins may continue to roost in the nest at night after they are able to fly.

The first step you should take is to learn as much as possible about the birds and their needs. A good place to start is the Purple Martin Conservation Association (PMCA), an international nonprofit organization dedicated to aiding purple martins through landlord education and scientific research. The PMCA website offers a wealth of information, including details and recommendations for housing.

Choose the right location. Martins have specific space and habitat requirements. Their housing should be located in the center of the largest open area available, about 30-120 feet from human dwellings, and near water. There should be no trees within 40 feet, preferably 60 feet. Housing height should be about 12-15 feet. Do not attach wires to the house or pole, especially if they lead to trees, buildings, or the ground. Predators can use the wires to access the housing. 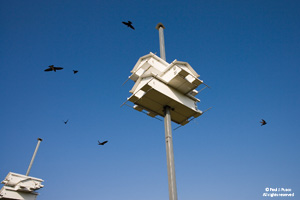 Put up manageable housing. High quality aluminum martin houses that do not have continuous porches are recommended (these are available from PMCA), as are hollow gourds designed specifically for martins. Housing should have easy access to compartments and a pole that telescopes, or is equipped with a winch or lanyard. Paint houses and gourds white; white housing attracts martins best and reflects sunlight, keeping nestlings cooler. Compartment floor dimensions should be at least 6 inches x 6 inches, but larger compartments (7" x 12") are preferred and offer better protection from predators and rain. Larger compartments also are attractive to starlings, but a special, half-moon shaped entrance hole will minimize starling problems. Round entrance holes should be 2-1/8 inches in diameter, while starling resistant entrance holes (half-moon) should measure 1-3/16 inches. Round entrances should be about 1 inch above the floor; starling resistant holes should be 1/4 inch above the floor. Make sure there is adequate ventilation and drainage in each compartment.

Porch dividers are helpful additions to a martin house. They define territories, provide a barrier to prevent a pair’s private space from being violated, and keep nestlings from wandering along porches or crossing over to other nests. The dividers also help attract martins to all available compartments.

Conduct weekly nest checks, daily walk-unders, and keep written records. Conducting nest checks is one of the most valuable practices landlords can adopt. Weekly nest checks will not cause martins to abandon their young. Rather, they’ll help you discover any problems that occur in time to correct them, such as nest parasites. If parasites or wet nests threaten the survival of nestlings, replace the nest material with clean, dry wood shavings. You also should number the compartments and keep written records. Walk under the housing daily to look for plucked martin feathers, thrown-out nestlings, dropped insect prey, hatched eggshells, etc. The items you find are clues to what's going on and may alert you to problems that need attention.

Practice active management. Do not allow competing cavity-nesters to claim the house or gourds first; returning martins will bypass already occupied houses even if some compartments remain empty. Starlings and house sparrows will take over compartments, destroy eggs, kill or injure nestlings and adults, and prevent martins from nesting at unestablished sites. Use starling resistant entrances on the house compartments and house sparrow traps to reduce threats from non-native birds. If native birds (tree swallows, wrens, bluebirds, or flycatchers) try to nest in your martin housing, close it and put up single-unit boxes for these desirable species elsewhere on your property. Reopen the martin housing only after the new boxes have been accepted.

Keep martin housing in good repair. Prior to the nesting season, make sure that gourds and/or houses are cleaned, repaired, and painted (white exterior latex paint) and that all drainage holes are free of debris. Houses that are stored inside over winter will last longer.

Don't give up. If your martin house or gourds are not used the first year they are installed, do not be discouraged! Purple martins have a limited range in Connecticut and expand into new areas slowly. It may take several years before a martin house is occupied.

Monitoring Martin Colonies: Landlords with active purple martin colonies in Connecticut are urged to contact the DEEP Wildlife Division at 860-424-3011 or deep.wildlife@ct.gov. The Division is attempting to document all of the colonies in the state.

The Wildlife Division would like to thank the Purple Martin Conservation Association for granting permission for the use of information from its website (www.purplemartin.org) to produce this fact sheet.