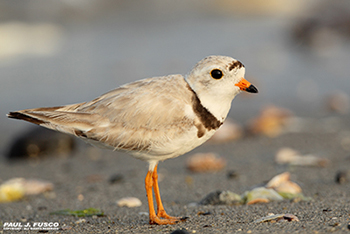 Background: In the late 1800s, unrestricted market hunting for the millinery (hat) trade devastated the piping plover population on the Atlantic Coast. Not only were the feathers used to adorn women’s hats, but the birds were also used for human consumption. Following passage of the Migratory Bird Treaty Act in 1918, the piping plover population recovered to a 20th century peak in the 1940s, only to decline again as human development and recreational use greatly intensified in coastal habitats. The population decline led to federal Endangered Species Act protection in 1986 and Connecticut Endangered Species Act Protection in 1992.

Range: Piping plovers nest from Nova Scotia south to North Carolina, with a population in the Great Lakes region north into Alberta, Canada, and a population along the Missouri River in Nebraska, the Dakotas, and Montana. The birds winter along the southern coast from North Carolina to Texas and into eastern Mexico and the Caribbean.

Description: Piping plovers are white below and creamy brown above, the color of dry sand. During the breeding season, they have a single black neck band that is sometimes incomplete and a black bar above the white forehead. This black neck band is completely lacking in winter. The primary feathers are dark brown, while the rump is white, contrasting with the brown back and tail, which are very conspicuous in the bird’s distraction display. The bill is orange with a black tip; the feet are also orange. Adult piping plovers typically weigh between 1.5 to 2.25 ounces, and measure in length from 6 to 7 inches with a wingspan of 14 to 15.25 inches.

The voice is a clear “peep-lo”; often only the “peep” is given.

The piping plover is often confused with another member of its family, the killdeer, which has 2 black bands across its chest and is larger than the plover.

Habitat and Diet: Piping plovers inhabit sandy beaches with little vegetation and access to mudflats and tidal creeks for feeding.

Their diet consists of marine worms, fly larvae, beetles, crustaceans, mollusks, and other small marine animals and their eggs.

Life History: Piping plovers arrive at Connecticut coastal beaches in late March to nest. The first eggs are laid by late April in a shallow depression in the sand often lined with shells. Four cream-colored eggs with dark brown flecks evenly distributed over the surface are usually laid. Both the male and female incubate the eggs, which hatch in 27 days. The young are precocial, meaning they have feathers and are able to move freely upon hatching. The tiny chicks, which look like cotton balls, leave the nest within hours of hatching – they can walk and run, but cannot yet fly. The young fledge (able to fly) in 28 days but continue to stay with the adults through migration. Birds that lose their nests and young will renest into early July. Plovers are able to breed in their first year.

Interesting Facts: When humans or potential predators come too close to a piping plover nest, the adults will try to distract them by flapping around like a wounded bird. This is sometimes referred to as a "broken wing" display.

Plovers have a defined beachfront territory. Beachgoers are met at the beginning of the territory by the plover and escorted along by the walking bird until the territory ends.

Unlike their nesting neighbors, least terns that fly and dive at enemies, adult plovers walk and stop, walk and stop to avoid detection by visually blending into the background.

Conservation and Management: Shoreline development has fragmented dune habitat, thus limiting piping plover nesting habitat. Beach stabilization projects have reduced the quality of remaining sites, forcing the birds to nest in less desirable areas, such as smaller, busier beaches with limited options for foraging. Intensive recreational use of beaches affects productivity by keeping birds off nests, and preventing them from attending eggs and young. Heavy pedestrian traffic or off-road vehicles on beaches can cause outright nest destruction or chick mortality from people inadvertently stepping on eggs or flightless chicks.

Each spring, DEEP delineates shorebird nesting habitat at coastal beaches with wooden stake and twine fencing and signs to protect the birds from human disturbance, as well as prevent people from inadvertently stepping on eggs. On some beaches, DEEP installs welded wire fencing (called exclosures) around piping plover nests to protect them from being destroyed by predators. These exclosures are removed after the chicks hatch.

DEEP, our conservation partners, and dedicated volunteers monitor nesting activity on beaches and inform and educate the public about the plight of the piping plover. Memorial Day and Fourth-of-July holiday weekends are especially sensitive times for nesting shorebirds because of the increased beach activity (especially at night) over the long weekends.

Share the beach and respect wildlife! Beaches are habitat, too.

Respect all shorebird nesting areas that are fenced or posted for the birds' protection. Do not approach or linger near piping plovers or their nests. Obey warnings on signs and stay away from fenced areas to avoid disturbing the nesting birds.

Do not attempt to "rescue" young birds that appear to be lost or too young. Young birds should not be removed from the beach to be cared for by people. In most cases, when immature birds are found alone, the adults have been frightened away but remain nearby and will return to their young once the intruder leaves.

When perceived "predators" approach, young piping plovers are likely to stand motionless while the parent bird tries to attract attention by pretending to have a broken wing or flying around the intruder. If you witness this behavior, DEEP advies you to move away from the area at once.

Do not leave or bury trash or food scraps on beaches. Garbage attracts predators which may prey upon piping plover eggs and chicks.

Do not fly kites or drones around nesting areas. The birds react to kites and drones as if they are aerial predators, like gulls or peregrine falcons.

You can help protect nesting birds by following instructions on posted signs indicating closure and reporting any observed vandalism or violations by calling DEEP's 24-hour Dispatch Center at 860-424-3333.

This Endangered and Threatened Species Fact Sheet Series is made possible by donations to the Connecticut Endangered Species/Wildlife Income Tax Checkoff Fund.
(rev. 3/2021)