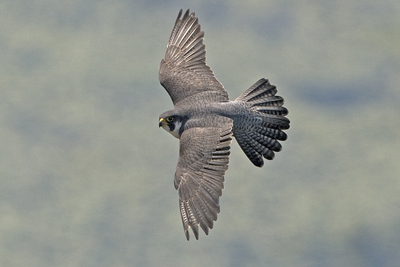 Background: The peregrine falcon was a regular nester in Connecticut from the 1860s through the early 1900s. Prior to the Migratory Bird Treaty Act of 1918 and the strengthening of collection regulations, hundreds of peregrine eggs and many adult specimens were collected in Connecticut and Massachusetts. Some live birds and eggs were collected for use in falconry. Many more eggs and specimens were added to private collections as part of a popular late 19th century hobby. Peregrine nesting activity in Connecticut declined through the 1920s and 1930s, and the last documented nesting occurred on the Travelers Tower in Hartford in the late 1940s. Peregrines remained absent from Connecticut until 1997 when a pair successfully nested once again on the Travelers Tower. The peregrine falcon was listed in 1992 as an endangered species on Connecticut's Endangered Species List. It was reclassified as a threatened species in 2010.

Peregrine falcon populations declined rapidly between 1950 and 1965 throughout the United States and parts of Europe. By 1975, the entire population of peregrines in the eastern United States was considered to be extirpated (disappeared from that region). This decline is directly attributed to the effect of organochlorine pesticides, such as DDT, on breeding populations. The speed and global scale of this species’ decline makes it one of the most remarkable events in recent environmental history. 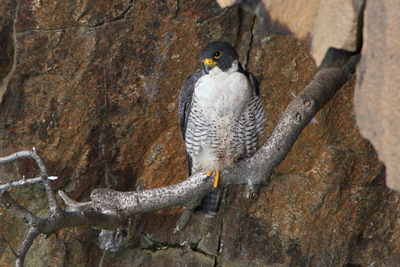 Due to the population crash, the peregrine falcon was declared a federally endangered species, and extensive efforts were made to reestablish birds in the eastern United States. Successful reintroduction programs, using captive-bred birds, helped restore small breeding populations along the East Coast. The Peregrine Fund, a non-profit organization dedicated to restoring peregrine populations, conducted the large captive breeding program. The reestablishment effort, coupled with restrictions placed on the use of organochlorine pesticides in the United States (DDT was banned in 1972), resulted in the recovery of the peregrine falcon population. The peregrine was removed from the federal endangered species list in 1999.

While Connecticut did not participate in any reintroduction programs, the state benefited from our neighboring states' efforts. In 1997, a peregrine pair successfully produced 3 chicks on the Travelers Tower. Leg bands revealed that the female of the pair had come from a 1994 reintroduction project in Greece, New York, sponsored by Rochester Gas & Electric, in cooperation with the New York Department of Environmental Conservation. In the years since peregrine falcons began nesting again in Connecticut, additional pairs have successfully produced young at locations in several towns. Every year, a number of dedicated volunteers and Wildlife Division staff monitor the nests throughout the nesting and fledging seasons. Division biologists also attempt to visit the nests (if they are accessible) to place identifying leg bands on the young before they fledge. This is an important management tool for monitoring this state threatened species.

Description: The peregrine falcon is a long-winged, medium-sized bird of prey. Adults have long, pointed wings and a long, rounded tail with narrow, black bands ending with a broad, dark band tipped with white. The barred upper parts are blue-gray, while the underparts are white to light buff and cross-barred with brown. The black crown and nape extend to the cheeks, forming a distinct black helmet. The feet are yellow.

Immature peregrines are similar, but the back and underparts are brown and the throat is heavily streaked with brown. Both adult and immature peregrines have a bold, dark, vertical whisker-like mark (mustache mark) on the sides of the head.

Range: The peregrine falcon is one of the most widespread birds in the world. It is found on all continents except Antarctica, and on many oceanic islands. Although widely distributed, the peregrine is common in only a few places.

Habitat and Diet: A wide variety of habitats are used by peregrine falcons. The birds are found in open country, such as coastal lowlands, as well as along rivers and in urban locations.

Pigeons, waterfowl, crows, jays, starlings, shorebirds, and other medium to small birds are the main prey items of the peregrine. In urban areas, pigeons and starlings comprise most of the diet. Beetles, dragonflies, and migrating monarch butterflies are eaten occasionally. 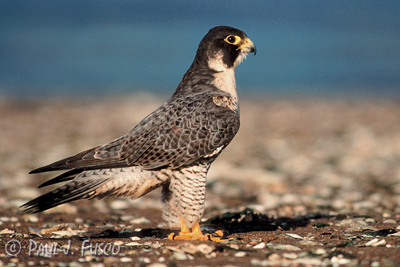 Life History: Nest sites, known as eyries, are located above an open area so the falcons can launch their aerodynamic hunts. The nest is a hollow, unlined scrape on a cliff, ledge, or rocky outcrop. Abandoned raven or hawk nests in similarly high locations are occasionally used. The most publicized nesting areas have been on roofs and ledges of city buildings. Pairs may use the same nest site for many years. Male peregrines arrive at the nest site first and go through a series of aerial displays to attract the females to the site. Territories are usually reestablished by late March.

Three to 4 cream or buff-colored eggs, covered with red-brown markings, are laid in late April and May at intervals of 2 to 3 days. Incubation, primarily done by the female, begins with the second or third egg and lasts 28 to 29 days for each egg. The hatchlings are closely brooded by the female for the first 14 days. The male typically brings food for all to the nest and the female feeds the young. The young begin flying at 35 to 42 days but remain dependent on the adults for another 2 months.

Peregrine falcons reach sexual maturity at age 3, and they may reach 17-20 years of age.

Interesting Facts: The peregrine falcon is probably best known for its spectacular method of capturing prey in mid-air. It flies faster than most other birds and, when hunting, it increases its speed by making aerial dives with the wings partially or fully pulled in. The peregrine plunges at speeds up to 175 miles per hour (mph) to attack its prey, which is killed instantly. This hunting dive is called a "stoop." Normal flight speed can range between 28 to 60 mph.

Because of its habit of preying on waterfowl, the peregrine falcon has historically been referred to as the duck hawk.

Peregrines can be preyed upon by great horned owls, gyrfalcons, and other peregrines.

Peregrine falcons have adapted to living in cities. Cities offer tall buildings with ledges for nesting, water sources, large populations of pigeons and starlings for food, and have few natural predators.

The scientific name comes from the Latin words falco, meaning "hook-shaped," possibly referring to the beak or claws, and peregrinus, meaning "to wander."

As part of the reintroduction effort, The Peregrine Fund released more than 4,000 captive-reared peregrines in 28 states over a 25-year period.

Respect locations of peregrine nest sites and do not disturb nesting birds.

North American peregrine falcon populations continue to be threatened by the use of DDT in the tropics where some spend the winter. Support for the advancement of alternative methods of pest control in developing nations will help not only the peregrine, but ospreys and countless species of songbirds that nest in the United States and Canada and winter in Central and South America.

The production of this Endangered and Threatened Species Fact Sheet Series is made possible by donations to the Endangered Species/Wildlife Income Tax Checkoff Fund.