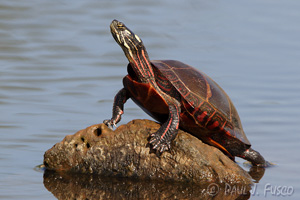 Description: Painted turtles are commonly found around quiet bodies of water. These brightly colored turtles gain their name from colorful markings along the head, neck, and shell. They often can be observed basking on logs and rocks around a body of water and will quickly scoot into water if threatened or disturbed.

The medium-sized painted turtle can be distinguished by its dark shell, which has olive lines running across the carapace (upper shell), dividing the large scutes (scales). The margin of both the carapace and plastron (bottom shell) have black and red markings. The head, neck, and limbs have yellow stripes. The plastron is typically yellow, but may be stained a rust/red color. Males can be distinguished from females by their long front claws, long tail, and smaller size. The carapace of an adult usually measures from 4.5 to 6 inches in length.

Range: The painted turtle is the most widely distributed North American turtle, and the only one to range across the entire continent. This species ranges from coast to coast through the northern United States and southern Canada, south to the Gulf of Mexico from Louisiana to southwestern Alabama.

Habitat and Diet: Primarily aquatic, painted turtles inhabit quiet shallow pools, rivers, lake shores, wet meadows, bogs, and slow-moving streams. They prefer pools that have suitable basking sites and a soft, muddy bottom that is rich in aquatic vegetation. The turtles are commonly observed basking on rocks and logs, even on top of one another. Opportunistic, painted turtles can be found in brackish tidal waters and salt marshes. Much of their time is spent concealed in submerged vegetation. The turtles spend the winter hibernating in mud or decayed vegetation on pond bottoms, emerging earlier than other turtles, typically in March.

Life History: The breeding period for painted turtles is from March to mid-June, with peak breeding time in April. Males perform an elaborate mating ritual. They face the females and wave their long front claws. After breeding, the female will leave the water to dig a nest to deposit her eggs. Eggs are laid sometime between May and July. The nest is usually within a few yards of water, but may be up to a half mile away. Females may travel significant distances, crossing roads, to find optimal nesting sites. The nest is a flask-shaped cavity in the ground. After the eggs (2 to 11, but typically 5 to 6) are deposited, they are covered with layers of soil and left to develop on their own. Females may lay 2 clutches per year. The incubation period is 72 to 80 days.

Nests are often preyed upon by raccoons and skunks. Sometimes 90% or more of turtle nests are lost to predators. The young also are taken by raccoons, skunks, foxes, herons, other birds, snakes, and large predaceous fish. The adults are rarely taken by predators, but if encountered on land they may lose limbs to raccoons, skunks, and foxes.

Painted turtles are thought to live between 20 to 40 years and reach sexual maturity at approximately 10 years of age.

Conservation Concerns: Being hit by vehicles while crossing roads is a significant source of mortality to this species. The turtles crossing roads are often gravid (pregnant) females searching for nesting sites.

There is concern that native, wild painted turtles are facing competition for food and basking sites from non-native red-eared sliders (Trachemys scripta elegans) that have been released into the wild by pet owners who no longer want to care for these exotic pets.

Leave turtles in the wild. They should never be kept as pets. Whether collected singly or for the pet trade, turtles that are removed from the wild are no longer able to be a reproducing member of a population. Every turtle removed reduces the ability of the population to maintain itself. You should also keep in mind that caring for a pet turtle is not as easy as you may think. They require specific temperatures, diets, and lighting for digestion and shell health. Cages must be kept clean as turtles can carry salmonella. And, turtles live a long time.

Never release a captive turtle into the wild. It probably would not survive, may not be native to the area, and could introduce diseases to wild populations.

Do not disturb turtles nesting in yards or gardens.

As you drive, watch out for turtles crossing the road. Turtles found crossing roads are often pregnant females and they should be helped on their way and not collected. Without creating a traffic hazard or compromising safety, drivers are encouraged to avoid running over turtles that are crossing roads. Also, still keeping safety precautions in mind, you may elect to pick up turtles from the road and move them onto the side they are headed. Never relocate a turtle to another area that is far from where you found it.

Learn more about turtles and their conservation concerns, and educate others about how to help Connecticut's turtle species.