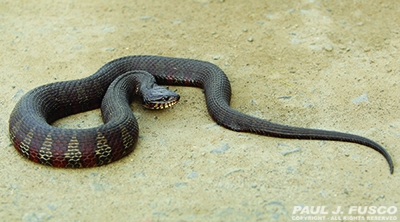 Background and Range: The northern watersnake is a common resident of nearly all of Connecticut’s freshwater wetlands and waterways.

This species ranges from southeastern Maine and extreme south Quebec to North Carolina, west to Colorado.

Description: The northern water snake is heavy-bodied with variable coloration and markings. The body is usually tan to gray with brown or reddish crossbands alternating with dark blotches on the sides. Markings are more prevalent on younger snakes, while adults tend to darken, resulting in plain, dark coloration. The scales are keeled (raised along the center of each scale). This snake can reach an adult length of 24 to 42 inches.

Northern watersnakes are often mistaken for the venomous water moccasin (Agkistodon picadors, also known as the cottonmouth) and killed. Although these two species may be similar in appearance, water moccasins do not occur in Connecticut. Southern Virginia is the northern extent of the water moccasin’s range. Northern watersnakes are also confused with another Connecticut snake, the venomous northern copperhead. Copperheads, however, are rarely found in water. Watersnakes are always found in or near water. The copperhead has a broad triangular head joined to a narrow neck, while the watersnake’s head is narrow, only slightly wider than its neck. Consult a field guide or the Snakes in Connecticut webpage for further identification characteristics.

Habitat and Diet: Northern watersnakes will inhabit any freshwater wetland with suitable cover and food, such as lakes, ponds, streams, rivers, reservoirs, swamps, and marshes. Rarely are they found in brackish water. A sedentary species, the watersnake’s home range is the size of the wetland it inhabits, or less than a 400-foot stretch of a river or stream.

Watersnakes feed during all hours, but may be restricted to daylight if nighttime water temperatures are cool. They feed primarily on fish, but also frogs, toads, salamanders, insects, crayfish, and rarely mice and shrews.

Life History: Northern watersnakes breed from April to May. Beginning in August through early October, they give birth to live young (viviparous) after a 58-day gestation period. Litter sizes range from 20 to 50 young, with 20 being typical. This snake is mature at 2 to 3 years of age.

Interesting Facts: The northern watersnake is well adapted for an aquatic existence. Excellent swimmers, watersnakes patrol the water with only their head above the surface, though they can easily submerge to seek out prey by probing the bottom with their snout. Prey is located by a combination of sight and smell; the snakes detect motion with their vision and also have an acute sense of smell.

Northern watersnakes, especially the young, fall prey to many animals. Mammalian predators include minks, skunks, and otters. Avian predators include hawks (northern harrier, red-tailed, red-shouldered, broad-winged), herons, egrets, bitterns, and rails. Other snakes, such as the eastern ratsnake and northern black racer, will prey on watersnakes. Large predacious fish, such as pike and bass, will also take watersnakes. This snake will emit a powerful musk from cloacal glands if attacked and can be quite fierce, biting and often chewing would-be attackers.

A watersnake will often conceal itself in vegetative cover. When temperatures are cool, however, it will bask to warm its body by sitting on rocks, floating logs, or branches overhanging water. The slightest disturbance will send basking watersnakes quickly into the water. When threatened, they can stay submerged for periods of 60 minutes or more.

As autumn approaches and temperatures drop, usually around October, nothern watersnakes will begin to group together to brumate for the season. Unlike hibernation when animals are asleep, brumating animals are awake but inactive. The grouping of snakes during winter is referred to as an aggregation. Winter den sites include earthen dams, muskrat burrows, beaver lodges, and vole tunnels. Occasionally, watersnakes will establish winter dens in upland areas. The snakes usually come out of their winter dens around April.

Take the time to learn about, understand, and respect this vitally important reptile, and share your knowledge with others. If you encounter a watersnake, observe it from a distance and allow it to go on its way. All snakes will retreat from humans if given a chance.

Watersnakes can be an economic threat or nuisance when they get into fish hatcheries and farm ponds. If you have a nuisance watersnake, it is advised that you try not to handle the snake yourself, especially if it cannot be positively identified (copperheads will travel to wet areas in spring and fall in search of migrating amphibians).

The killing of any snake is strongly discouraged. Additionally, wild snakes should NEVER be collected as pets. If you encounter a snake problem, assistance and more information about snakes can be found by visiting the Snakes in Connecticut webpage or calling the DEEP Wildlife Division at 860-424-3011.