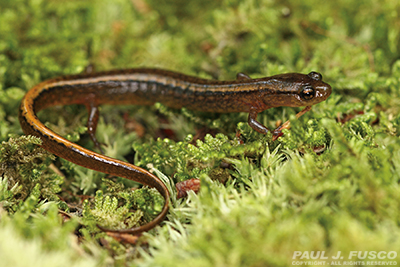 As member of the lungless salamander family (Plethodontidae), this salamander lacks lungs but absorbs oxygen through its skin.

Range: The two-lined salamander is found from northern Virginia, northern West Virginia, and northeastern Ohio north through Delaware, Maryland, and the northern and central portions of New Jersey, Pennsylvania, New York, and New England, and on north into Canada.

Description: This small to medium-sized salamander ranges in length from 2.75 to 4.5 inches. It is slender with thin, delicate limbs. The upper or back surface varies in color from bright yellow, olive green, bronze to light gray. As its name implies, the two-lined salamander has two dark lines, one along each side, which may be broken up into a speckled pattern. The underside of this salamander is translucent, pale yellow, or white. An orange or yellow wash usually occurs on the underside of the laterally flattened tail. Individuals found in upland areas are more boldly patterned than individuals from lowland, sandy and coastal areas (they are more darkly pigmented).

Two-lined salamander larvae are quite large, measuring between 2.5 to 2.75 inches long. They exhibit a pattern of spots and mottling on the upper surface, often causing them to be confused with larval dusky salamanders. However, two-lined salamanders can be distinguished by their smaller, more delicate build, equally proportioned front and hind limbs, and the orange coloration under the tail.

Habitat and Diet: Two-lined salamanders have been found in swift flowing rocky streams and brooks; muddy meandering flood plain rivers; wooded swamps, springs and seepage areas; at the edge of vernal pools; and in damp moist woodlands – sometimes several hundred feet from the nearest stream. They are somewhat tolerant of urbanization. These salamanders will hide under flat rocks, logs, and leaf litter at the water's edge.

Insects, annelids, arachnids, sow bugs, mites, and even an occasional salamander make up the diet of the two-lined salamander.

Life History: Two-lined salamanders lay 30 or more eggs in April through July. The eggs are submerged underwater and attached to the underside of a rock. Females have been found guarding their eggs. The eggs hatch approximately one month later into aquatic larvae that take 1 to 3 years to transform into salamanders. Because of this lengthy larval period, different age classes of two-lined salamanders are often found in the same stream.

Interesting Facts: Somewhat tolerant of urbanization, the two-lined salamander has replaced the dusky salamander in areas in southwestern Connecticut where they once both existed.

The two-lined salamander may remain active during winter underground near streams.

Conservation Concerns: Populations of two-lined salamanders are impacted by the destruction, disturbance, or pollution of their small aquatic habitats, including streams and seeps. Pollution, runoff, and stream channelization and scouring are all major threats to these habitats. Removal of forests around streams and seeps increases siltation, water temperature, and evaporation, and alters the prey base and foraging opportunities for this species.

Awareness and education of the two-lined salamander’s life history and habits are invaluable tools for conservation. Consider the preservation of important stream, spring, and seepage habitat types. Not only are the salamanders important, but their presence indicates a healthy wetland.

If you happen to find a two-lined salamander, leave it where you found it and only take photographs. Salamanders should never be collected from the wild. Every individual is vitally important to its local population.

Help conserve water purity and adequate above ground habitat in your area of Connecticut to allow this widespread species of salamander to remain common throughout the state.