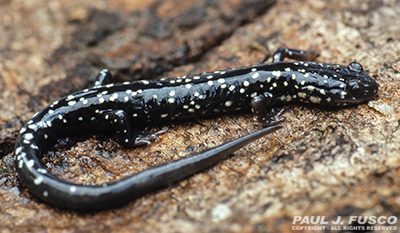 Background: The northern slimy salamander is a medium-large sized member of the “lungless” salamander family (Plethodontidae). This salamander gets its name from a glue-like secretion it emits from glands in its skin as a defense against predators or when disturbed. The substance is difficult to remove from hands or clothing.

Range: There are at least 16 subspecies of slimy salamanders which look the same but are genetically variable. Overall, this species ranges from Texas to Florida, north into Missouri and Illinois and northeast into New York and Connecticut.

Description: The slimy salamander is mostly black with white flecks and blotches along the sides and top portion (dorsum) of the body. The belly is typically lighter in base color than the rest of the body. The slimy has 15 to 17 (typically 16) costal grooves (vertical flanks along a salamander’s sides). The tail accounts for half or more of the total body length, which ranges between 4.5 to 6.5 inches. The tail also is cylindrical (distinguishing it from the laterally flattened tail of the similar-looking Jefferson and blue-spotted salamanders). Juveniles look similar to adults.

Habitat and Diet: The slimy salamander is restricted to old second growth deciduous or hemlock forests with steep, rocky slopes. It hides under rotten logs and thick duff layers on the forest floor. Slimy salamanders require wet or moist areas for breeding purposes.

This amphibian feeds at night on a variety of invertebrates, such as earthworms, snails, slugs, spiders, centipedes, and millipedes, as well as larval and adult insects.

Life History: Slimy salamanders are late spring-time breeders, much like many other Connecticut amphibians. Not much is known about the breeding activities of slimy salamanders. It is suspected that they are sexually mature at 5 years of age and that the females only breed every other year. Unlike most other salamanders, open water is not needed for the laying of eggs. Instead, the 13 to 34 eggs (average 16-17) are usually deposited in decaying logs or attached underneath rocks. All development takes place within the eggs, including metamorphosis, so that the emerging juvenile salamanders appear as smaller versions of the adults. The juveniles may have just as many, if not more, white flecks on their bodies.

Interesting Facts: This nocturnal salamander emerges from its burrow at dusk and retreats at dawn. It is occasionally active on rainy days. During a drought, the slimy salamander can be found deep underground or under rotting logs. The species hibernates underground from November to March.

When threatened, the slimy salamander will lash out with its tail, secreting a sticky, gluey substance. Potential predators that come into contact with this substance may experience mastication (sticky jaw binding), thus reducing the movement of the jaws.

Conservation Concerns: The major threat facing the slimy salamander is the loss of undisturbed mature forests in southwestern Connecticut to urban and suburban development, road fragmentation, and habitat degradation. Preservation of these habitats is crucial for the survival of this species in our state.

Awareness and education of the slimy salamander's life history and habitats are invaluable tools for conservation. Consider the preservation of important mature growth forests. Not only are salamanders important, but their presence indicates a healthy habitat.

If you happen to find a slimy salamander, leave it where you found it and only take photographs. You take the risk of getting "slimed" if you handle a slimy salamander, and the slime is difficult to remove. Salamanders should never be collected from the wild. Collection or removal of any slimy salamander is strictly prohibited by the Connecticut Endangered and Threatened Species Act. If you lift any logs or rocks while rummaging through forests, remember to place them back exactly how you found them.

If you locate a slimy salamander, please contact the DEEP Wildlife Division at 860-424-3011 or deep.ctwildlife@ct.gov.

Additional information about salamanders is available on the Salamanders in Connecticut webpage.