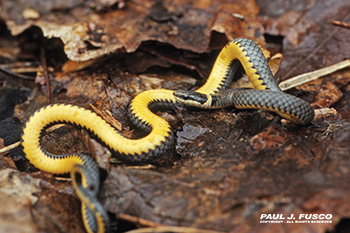 Background and Range: The small, secretive, and distinctly marked northern ring-necked snake is found in a wide variety of habitats in Connecticut, from near sea level to the state's highest elevations in the northwest corner. This snake is presently widespread and secure in the state; however, it appears to be very common in certain areas while rare in others.

On a larger scale, the northern ring-necked snake is found from Nova Scotia westward to northeastern Wisconsin and south through the Appalachian Mountains to northern Georgia and northeastern Alabama. Westward, the range extends as far as the western portions of Kentucky and Tennessee, eastern and southern Ohio, and the southern sections of Indiana and Illinois.

Description: As the name implies, this snake has a ring around the neck that is yellow or yellowish-orange. The body is a dull blue-gray body, with a bright yellow belly that may have black spots. The black head is flattened, and the scales are smooth and polished. Ring-necked snakes are small and thin, measuring from 9 to 15 inches in length. Juveniles closely resemble adults.

Habitat and Diet: Ring-necked snakes are found in a diversity of habitats, such as gardens, meadows, deciduous forests, rocky areas, old fields, grassy fields, gravel pits, sand barrens, and dumps. These habitats also can range from pristine to disturbed, wet to dry, and open to closed canopy. This snake is most frequently encountered under the cover of rocks, logs, bark, leaf litter, boards, and other debris. Stone walls are often used for cover, especially old walls in wooded areas that have an accumulation of leaves and soil in their crevices. Ring-necked snakes are occasionally found in basements as well.

Typical food items of the ring-necked snake include small salamanders (like the redback), redbelly snakes, and earthworms.

Life History: Ring-necked snakes are active from May through mid-October. They are oviparous, meaning that they lay eggs. The 1-6 eggs (average 3.5) are laid in June and early July, often in a community nest. These nests are frequently located in rotted logs and sunny locations.

Interesting Facts: This basically nocturnal snake spends most of the day concealed under cover. When disturbed from its hiding place, it will usually seek cover under the nearest available object.

This small snake is preyed on by other larger snakes, like the black racer, and domestic cats. Roadkills are a frequent source of mortality.

Take the time to learn about, understand, and respect this vitally important reptile, and share your knowledge with others. If you encounter a northern ring-necked snake, observe it from a distance, and allow it to go on its way. All snakes will retreat from humans if given a chance.

Even though ring-necked snakes are mild-tempered, you should try not to disturb it by getting too close or handling it. Its only defense is the release of musk from special glands when disturbed and to writhe violently to try to escape if handled.

The killing of this snake is strongly discouraged. Additionally, wild snakes should NEVER be collected as pets. If you encounter a snake problem, assistance and more information about snakes can be found by visiting the Snakes in Connecticut webpage or calling the DEEP Wildlife Division at 860-424-3011.